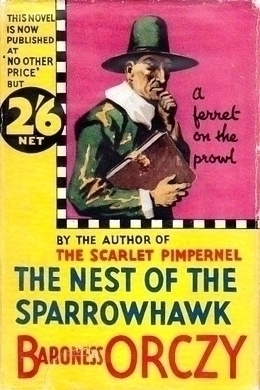 The Nest of the Sparrowhawk

A Romance of the XVIIth Century

A dastardly deception Lady Sue was young, lovely, fresh – and due to inherit a vast fortune when she came of age. Sir Marmaduke was a Roundhead – and supporter of Oliver Cromwell in the English Civil War. It is 1657. King Charles I’s head is long gone and Cromwell rules as Protector. From his manor in Kent, Sir Marmaduke proclaims allegiance to the Puritanical way of the Protectorate. But Sir Marmaduke’s noble words hide wicked plans. For Sir Marmaduke is none other than the ward of Lady Sue. And he means to have the tender lady for his wife … and her fortune for his own. How? Why, by masquerading as the exiled Prince of Orleans, of course. And by murdering or at least disgracing Lady Sue’s other suitors, like handsome young Richard Lambert. Historical fiction at its richest and most fascinating by the author of The Scarlet Pimpernel.

Master Hymn-of-Praise Busy folded his hands before him ere he spoke:

“Nay! but I tell thee, woman, that the Lord hath no love for such frivolities! and alack! but ‘tis a sign of the times that an English Squire should favor such evil ways.”

“Evil ways? The Lord love you, Master Hymn-of-Praise, and pray do you call half an hour at the skittle alley ‘evil ways’?”

“Aye, evil it is to indulge our sinful bodies in such recreation as doth not tend to the glorification of the Lord and the sanctification of our immortal souls.”

He who sermonized thus unctuously and with eyes fixed with stern disapproval on the buxom wench before him, was a man who had passed the meridian of life not altogether–it may be surmised–without having indulged in some recreations which had not always the sanctification of his own immortal soul for their primary object. The bulk of his figure testified that he was not averse to good cheer, and there was a certain hidden twinkle underlying the severe expression of his eyes as they rested on the pretty face and round figure of Mistress Charity that did not necessarily tend to the glorification of the Lord.

Apparently, however, the admonitions of Master Hymn-of-Praise made but a scanty impression on the young girl’s mind, for she regarded him with a mixture of amusement and contempt as she shrugged her plump shoulders and said with sudden irrelevance:

“Have you had your dinner yet, Master Busy?”

“‘Tis sinful to address a single Christian person as if he or she were several,” retorted the man sharply. “But I’ll tell thee in confidence, mistress, that I have not partaken of a single drop more comforting than cold water the whole of to-day. Mistress de Chavasse mixed the sack-posset with her own hands this morning, and locked it in the cellar, of which she hath rigorously held the key. Ten minutes ago when she placed the bowl on this table, she called my attention to the fact that the delectable beverage came to within three inches of the brim. Meseems I shall have to seek for a less suspicious, more Christian-spirited household, whereon to bestow in the near future my faithful services.”

Hardly had Master Hymn-of-Praise finished speaking when he turned very sharply round and looked with renewed sternness–wholly untempered by a twinkle this time–in the direction whence he thought a suppressed giggle had just come to his ears. But what he saw must surely have completely reassured him; there was no suggestion of unseemly ribaldry about the young lad who had been busy laying out the table with spoons and mugs, and was at this moment vigorously–somewhat ostentatiously, perhaps–polishing a carved oak chair, bending to his task in a manner which fully accounted for the high color in his cheeks.

He had long, lanky hair of a pale straw-color, a thin face and high cheek-bones, and was dressed–as was also Master Hymn-of-Praise Busy–in a dark purple doublet and knee breeches, all looking very much the worse for wear; the brown tags and buttons with which these garments had originally been roughly adorned were conspicuous in a great many places by their absence, whilst all those that remained were mere skeletons of their former selves.

The plain collars and cuffs which relieved the dull color of the men’s doublets were of singularly coarse linen not beyond reproach as to cleanliness, and altogether innocent of starch; whilst the thick brown worsted stockings displayed many a hole through which the flesh peeped, and the shoes of roughly tanned leather were down at heel and worn through at the toes.

Undoubtedly even in these days of more than primitive simplicity and of sober habiliments Master Hymn-of-Praise Busy, butler at Acol Court in the county of Kent, and his henchman, Master Courage Toogood, would have been conspicuous for the shabbiness and poverty of the livery which they wore.

The hour was three in the afternoon. Outside a glorious July sun spread radiance and glow over an old-fashioned garden, over tall yew hedges, and fantastic forms of green birds and heads of beasts carefully cut and trimmed, over clumps of late roses and rough tangles of marguerites and potentillas, of stiff zinnias and rich-hued snapdragons.

Through the open window came the sound of wood knocking against wood, of exclamations of annoyance or triumph as the game proceeded, and every now and then a ripple of prolonged laughter, girlish, fresh, pure as the fragrant air, clear as the last notes of the cuckoo before he speaks his final farewell to summer.