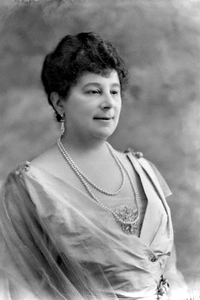 Baroness Emma Magdolna Rozália Mária Jozefa Borbála “Emmuska” Orczy de Orczi was a Hungarian-born British novelist, playwright and artist of noble origin. She is most known for her series of novels featuring the Scarlet Pimpernel.

In 1903, Orczy and her husband wrote a play based on one of her short stories about an English aristocrat, Sir Percy Blakeney, Bart., who rescued French aristocrats from the French Revolution: The Scarlet Pimpernel. The play was accepted for production in the West End and though initially drew only small audiences, it ran four years, broke many stage records, was translated and produced in other countries, and underwent several revivals. This theatrical success generated huge sales for the novel and Orczy went on to write over a dozen sequels. Orczy’s novels were racy, mannered melodramas and she favored historical fiction.

The story is set in Hungary and the scene is laid in a village close to the Maros. On this particular fourteenth of September it is Andor’s turn to go u...read more »

Not a Scarlet Pimpernel novel, but one set in the same universe. Excerpt: This interview had occurred in May in the year 1800. A few months later half ...read more »

Luke de Mountford, heir to his uncle Lord Radcliffe, asks for Louise Harris’s hand in marriage. Just when everything seems to be going well, another nep...read more »

After their recent defeat, the hamlets and villages of Derbyshire are no longer ringing with the wild shouts of Bonny Prince Charlie’s Highland Brigade;...read more »

Mr. Hector Ratichon-onetime aide to Robespierre and confidant of Napoleon Bonaparte-is a rascal and rogue of the highest order. Nevertheless, his servic...read more »

An Episode in the Life of Mr. Thomas Betteron as told by His Friend John. “After that memorable Day, Mistress, we were like naughty Children who were be...read more »

This story takes place during the occupation of Netherlands in 1570’s by Spain and describes the battle for Ghent….”It lacked two hours before the dawn ...read more »

Lord Antony Dewhurst is ‘a splendid fellow - a fine sportsman, a loyal gentleman’. The young gallant is also Percy’s close friend and a lieutenant in th...read more »

Timothy O’Clerigh is cheated out of his inheritance by an unscrupulous woman. His efforts to ragain his lost fortune leads him to the South American con...read more »

A story of the French aristocracy, the book concerns Madame de Pompadour’s influence over the King and France.

The League is up to their old tricks again, but this time they have the help of a local simple girl from the country, Fleurette. When she and her love f...read more »

The League of the Scarlet Pimpernel has disguised themselves as a group of shabby second-rate musicians, in order to save an innocent family from death....read more »

The intrigues of the royalist and those of the adepts of Napoleon Bonaparte. Story set during the French Revolution. The perfect calm of an early spring...read more »

Historical adventure novel set during the French Revolution On the rare occasions when Lady Chartley was “at home,” the whole of the élite of Cannes soc...read more »

It is the early days of the French Republic, and Robespierre’s revolutionaries find their wicked schemes repeatedly being thwarted. It appears that Sir ...read more »

Orczy tells of those three—the woman, and the two men—playmates, enemies, lovers in turn. It seemed well-nigh impossible to attempt the isolation of the...read more »

The year is 1623, the place Haarlem in the Netherlands. Diogenes - the first Sir Percy Blakeney, the Scarlet Pimpernel’s ancestor - and his friends Pyth...read more »

The League of the Scarlet Pimpernel (1919)

More adventures amongst the terrors of revolutionary France. No one has uncovered the identity of the famous Scarlet Pimpernel - no one except his wife ...read more »

A dastardly deception Lady Sue was young, lovely, fresh – and due to inherit a vast fortune when she came of age. Sir Marmaduke was a Roundhead – and su...read more »

A nameless old man sits in the corner of a cozy London tea shop, and without leaving his seat, solves baffling crimes reported to him by an admiring lad...read more »

‘Who is this man, this Scarlet Pimpernel?’ Each day this question grew more pressing to the rulers of the French Revolution. Only this man and his band ...read more »

In The Tangled Skein, Baroness Orczy does not paint Queen Mary nearly so black as she is usually portrayed. Indeed Mary is depicted as so passionately l...read more »

It is what happened after the death of Louis XVII, that is so amazingly interesting. Through various entries Cardinal Beneventy’s diary, we can follow t...read more »

Taurus Antinor loved her, that she knew. The last four days had made a woman of her: she had tasted of and witnessed every passion that rends a human he...read more »