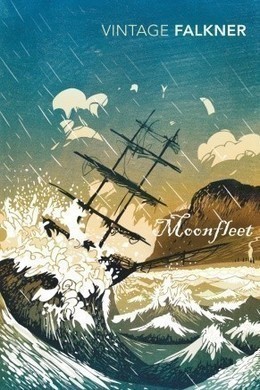 The novel is set in a fishing village in Dorset during the mid 18th century. The story concerns a 15 year old orphan boy, John Trenchard, who becomes friends with an older man who turns out to be the leader of a gang of smugglers. A much-loved classic story about a boy’s adventures among smugglers and thieves as he endeavours to discover the whereabouts of the treasure hidden by the legendary pirate Blackbeard.

The village of Moonfleet lies half a mile from the sea on the right or west bank of the Fleet stream. This rivulet, which is so narrow as it passes the houses that I have known a good jumper clear it without a pole, broadens out into salt marshes below the village, and loses itself at last in a lake of brackish water. The lake is good for nothing except sea-fowl, herons, and oysters, and forms such a place as they call in the Indies a lagoon; being shut off from the open Channel by a monstrous great beach or dike of pebbles, of which I shall speak more hereafter. When I was a child I thought that this place was called Moonfleet, because on a still night, whether in summer, or in winter frosts, the moon shone very brightly on the lagoon; but learned afterwards that ‘twas but short for ‘Mohune-fleet’, from the Mohunes, a great family who were once lords of all these parts.

My name is John Trenchard, and I was fifteen years of age when this story begins. My father and mother had both been dead for years, and I boarded with my aunt, Miss Arnold, who was kind to me in her own fashion, but too strict and precise ever to make me love her.

I shall first speak of one evening in the fall of the year 1757. It must have been late in October, though I have forgotten the exact date, and I sat in the little front parlour reading after tea. My aunt had few books; a Bible, a Common Prayer, and some volumes of sermons are all that I can recollect now; but the Reverend Mr. Glennie, who taught us village children, had lent me a story-book, full of interest and adventure, called the Arabian Nights Entertainment. At last the light began to fail, and I was nothing loth to leave off reading for several reasons; as, first, the parlour was a chilly room with horse-hair chairs and sofa, and only a coloured-paper screen in the grate, for my aunt did not allow a fire till the first of November; second, there was a rank smell of molten tallow in the house, for my aunt was dipping winter candles on frames in the back kitchen; third, I had reached a part in the Arabian Nights which tightened my breath and made me wish to leave off reading for very anxiousness of expectation. It was that point in the story of the ‘Wonderful Lamp’, where the false uncle lets fall a stone that seals the mouth of the underground chamber; and immures the boy, Aladdin, in the darkness, because he would not give up the lamp till he stood safe on the surface again. This scene reminded me of one of those dreadful nightmares, where we dream we are shut in a little room, the walls of which are closing in upon us, and so impressed me that the memory of it served as a warning in an adventure that befell me later on. So I gave up reading and stepped out into the street. It was a poor street at best, though once, no doubt, it had been finer. Now, there were not two hundred souls in Moonfleet, and yet the houses that held them straggled sadly over half a mile, lying at intervals along either side of the road. Nothing was ever made new in the village; if a house wanted repair badly, it was pulled down, and so there were toothless gaps in the street, and overrun gardens with broken-down walls, and many of the houses that yet stood looked as though they could stand but little longer.

The sun had set; indeed, it was already so dusk that the lower or sea-end of the street was lost from sight. There was a little fog or smoke-wreath in the air, with an odour of burning weeds, and that first frosty feeling of the autumn that makes us think of glowing fires and the comfort of long winter evenings to come. All was very still, but I could hear the tapping of a hammer farther down the street, and walked to see what was doing, for we had no trades in Moonfleet save that of fishing. It was Ratsey the sexton at work in a shed which opened on the street, lettering a tombstone with a mallet and graver. He had been mason before he became fisherman, and was handy with his tools; so that if anyone wanted a headstone set up in the churchyard, he went to Ratsey to get it done. I lent over the half-door and watched him a minute, chipping away with the graver in a bad light from a lantern; then he looked up, and seeing me, said:

‘Here, John, if you have nothing to do, come in and hold the lantern for me, ‘tis but a half-hour’s job to get all finished.’