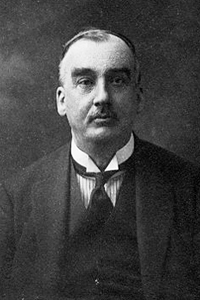 John Meade Falkner was an English novelist and poet, best known for his novel, Moonfleet. An extremely successful businessman as well, he became chairman of the arms manufacturer Armstrong Whitworth during World War I. In addition to his three novels and his poetry, he also wrote three topographical guides (Oxfordshire, Bath and Berkshire) and a History of Oxfordshire.

The novel is set in a fishing village in Dorset during the mid 18th century. The story concerns a 15 year old orphan boy, John Trenchard, who becomes fr...read more »

Chilling in the extreme, The Lost Stradivarius is a classic tale of the supernatural. While practicing in his rooms in Oxford, gifted violinist John Mal...read more »

Set in the mid-nineteenth century, The Nebuly Coat is the story of a young architect, Edward Westray, who is sent to the remote Dorset town of Cullerne ...read more »