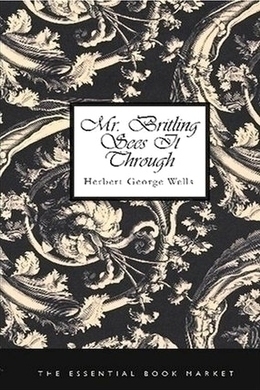 Mr. Britling Sees It Through

Mr Britling Sees It Through is a 1916 novel by H. G. Wells. It tells the story of a renowned writer, Mr Britling, and his family and friends in the fictional village of Matching’s Easy, Essex, at the start of the First World War. The book is broken into three sections: Matching’s Easy At Ease, in which American visitor Mr Direck arrives at Britling’s house in summer 1914; Matching’s Easy At War, set in the first months of the War; and The Testament of Matching’s Easy.The book was one of the most popular novels in the United Kingdom during the War and vividly evokes the experience of the war from the Home Front.

It was the sixth day of Mr. Direck’s first visit to England, and he was at his acutest perception of differences. He found England in every way gratifying and satisfactory, and more of a contrast with things American than he had ever dared to hope.

He had promised himself this visit for many years, but being of a sunny rather than energetic temperament–though he firmly believed himself to be a reservoir of clear-sighted American energy–he had allowed all sorts of things, and more particularly the uncertainties of Miss Mamie Nelson, to keep him back. But now there were no more uncertainties about Miss Mamie Nelson, and Mr. Direck had come over to England just to convince himself and everybody else that there were other interests in life for him than Mamie….

And also, he wanted to see the old country from which his maternal grandmother had sprung. Wasn’t there even now in his bedroom in New York a water-colour of Market Saffron church, where the dear old lady had been confirmed? And generally he wanted to see Europe. As an interesting side show to the excursion he hoped, in his capacity of the rather underworked and rather over-salaried secretary of the Massachusetts Society for the Study of Contemporary Thought, to discuss certain agreeable possibilities with Mr. Britling, who lived at Matching’s Easy.

Mr. Direck was a type of man not uncommon in America. He was very much after the fashion of that clean and pleasant-looking person one sees in the advertisements in American magazines, that agreeable person who smiles and says, “Good, it’s the Fizgig Brand,” or “Yes, it’s a Wilkins, and that’s the Best,” or “My shirt-front never rucks; it’s a Chesson.” But now he was saying, still with the same firm smile, “Good. It’s English.” He was pleased by every unlikeness to things American, by every item he could hail as characteristic; in the train to London he had laughed aloud with pleasure at the chequer-board of little fields upon the hills of Cheshire, he had chuckled to find himself in a compartment without a corridor; he had tipped the polite yet kindly guard magnificently, after doubting for a moment whether he ought to tip him at all, and he had gone about his hotel in London saying “Lordy! Lordy! My word!” in a kind of ecstasy, verifying the delightful absence of telephone, of steam-heat, of any dependent bathroom. At breakfast the waiter (out of Dickens it seemed) had refused to know what “cereals” were, and had given him his egg in a china egg-cup such as you see in the pictures in Punch. The Thames, when he sallied out to see it, had been too good to be true, the smallest thing in rivers he had ever seen, and he had had to restrain himself from affecting a marked accent and accosting some passer-by with the question, “Say! But is this little wet ditch here the Historical River Thames?”

In America, it must be explained, Mr. Direck spoke a very good and careful English indeed, but he now found the utmost difficulty in controlling his impulse to use a high-pitched nasal drone and indulge in dry “Americanisms” and poker metaphors upon all occasions. When people asked him questions he wanted to say “Yep” or “Sure,” words he would no more have used in America than he could have used a bowie knife. But he had a sense of rôle. He wanted to be visibly and audibly America eye-witnessing. He wanted to be just exactly what he supposed an Englishman would expect him to be. At any rate, his clothes had been made by a strongly American New York tailor, and upon the strength of them a taxi-man had assumed politely but firmly that the shillings on his taximeter were dollars, an incident that helped greatly to sustain the effect of Mr. Direck, in Mr. Direck’s mind, as something standing out with an almost representative clearness against the English scene…. So much so that the taxi-man got the dollars….

Because all the time he had been coming over he had dreaded that it wasn’t true, that England was a legend, that London would turn out to be just another thundering great New York, and the English exactly like New Englanders….