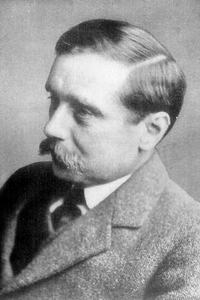 Herbert George Wells, better known as H. G. Wells, was an English writer best known for such science fiction novels as The Time Machine, The War of the Worlds and The Invisible Man. He was a prolific writer of both fiction and non-fiction, and produced works in many different genres, including contemporary novels, history, and social commentary. Wells was an outspoken socialist and a pacifist, and his later works became increasingly political and didactic. His middle period novels (1900-1920) were more realistic; they covered lower middle class life and the ‘New Woman’ and the Suffragettes. Along with Jules Verne, Well is often referred to as “The Father of Science Fiction”. (source: Wikipedia)

Wells’ uncanny ability to highlight the problems which are now most acute and supply tentative solutions that allow a maximum of individual freedom meri...read more »

Stong-willed, reckless and fiercely independent, Ann Veronica Stanley is determined to be a Person, to work, love and, above all, to live. Walking away ...read more »

In 1901, the great writer and social critic attempted to predict the future in this book, a fascinating mix of accurate forecasts — development of cars,...read more »

This book covers the author’s conception of God aside from any religion. He does not come from a religious view in order to transmit the truest concepti...read more »

A provocative novel by H.G. Wells. In the midst of a world war, the tail of a comet brushes the atmosphere of earth, causing everyone to lose consciousn...read more »

Orphaned at an early age, raised by his aunt and uncle, and apprenticed for seven years to a draper, Artie Kipps is stunned to discover upon reading a n...read more »

Young, impoverished, and ambitious science student Mr. Lewisham is locked in a struggle to further himself through academic achievement. But when his fo...read more »

Certain wholesale aspects of man-making with a skin of infinite delicacy that life will harden very speedily, with a discomforted writhing little body, ...read more »

Mr Barnstaple was ever such a careful driver, careful to indicate before every manoeuvre and very much in favour of slowing down at the slightest hint o...read more »

Mr Britling Sees It Through is a 1916 novel by H. G. Wells. It tells the story of a renowned writer, Mr Britling, and his family and friends in the fict...read more »

In The War of the Worlds, H. G. Wells imagined aliens from Mars descending to Earth with violent intentions. In Star Begotten, the suspicion arises that...read more »

Tales of Space and Time is a fantasy and science fiction collection of three short stories and two novellas written by H. G. Wells between 1897 and 1898...read more »

Mr Parnham is in a quandary. Sir Bussy Woodcock has invited him to a siance and Mr Parnham is more than a little keen to keep the acquaintance going - a...read more »

Although best known for his novels, it was in his early short fiction that H. G. Wells first explored the relationship between the fantastical and every...read more »

This allegorical satire about a man fleeing from his evil dreams was written under the influence of the Spanish Civil War. The croquet player, comfortab...read more »

The Discovery of the Future is a philosophical lecture by H. G. Wells that argues for the knowability of the future. It was originally delivered to the ...read more »

The Door in the Wall, considered by both readers and critics, to be Wells’s finest tale, examines an issue to which Wells returned repeatedly in his wri...read more »

When penniless businessman Mr. Bedford retreats to the Kent coast to write a play, he meets by chance the brilliant Dr. Cavor, an absentminded scientist...read more »

Mr Polly is an ordinary middle-aged man who is tired of his wife’s nagging and his dreary job as the owner of a regional gentleman’s outfitters. Faced w...read more »

Presenting itself as a biography of Rudolf “Rud” Whitlow, who is born with such an aggressive temperament that scarcely is he born but his monthly nurse...read more »

Spine-tingling and entertaining, The Invisible Man is a science fiction classic–and a penetrating, unflinching look into the heart of human nature. To i...read more »

A shipwreck in the South Seas, a palm-tree paradise where a mad doctor conducts vile experiments, animals that become human and then “beastly” in ways t...read more »

As H. G. Wells sat down to write, he realised with almost shuddering accuracy that he had reached the exact same age as Machiavelli was when he fell fro...read more »

On the death of his father, Stephen Stratton writes a long and deeply personal letter to his son, hoping that, as his son becomes a man, he can benefit ...read more »

The Plattner Story and Others is a collection of seventeen short stories written by H.G. Wells, originally published in 1897, offers the reader classic ...read more »

An unnamed protagonist chooses to spend the night in the remote Lorraine Castle, in a room that is said to be haunted; in an effort to disprove the vari...read more »

This 1915 novel masquerades as a biography of the fictitious William Porphyry Benham, prepared by friends after his death. From a young age, Benham fixe...read more »

For the fashionable and affluent Randolph Buntings, it was just another day at the beach - that was until Fred spotted a mysterious lady in a red dress ...read more »

When Dr Philip Raven, an intellectual working for the League of Nations, dies in 1930 he leaves behind a powerful legacy - an unpublished ‘dream book’. ...read more »

A troubled insomniac in 1890s England falls suddenly into a sleep-like trance, from which he does not awake for over two hundred years. During his centu...read more »

The Stolen Bacillus and Other Incidents is a collection of fifteen fantasy and science fiction short stories written by the English author H. G. Wells ...read more »

Wells touches gently on time travel as a notion, but mostly The Time Machine is about the terminal future he sees for mankind: His nameless time travele...read more »

This thrilling tale is H. G. Wells at his modernist, visionary best. In 1907, a naive Londoner named Bert Smallways finds himself an unwitting passenger...read more »

“No one would have believed in the last years of the nineteenth century that this world was being watched keenly and closely by intelligences greater th...read more »

Although H. G. Wells is best known for his science fiction stories he wrote in many genres including history, and social commentaries. The Wheels of Cha...read more »

It is the tale of a fallen angel who simply cannot adapt to society in a small English village. The angel’s reactions to the villagers, his pureness and...read more »

This chilling, futuristic novel, written in 1913, was incredibly prophetic on a major scale. Wells was a genius and visionary, as demonstrated by many o...read more »

In Twelve stories and a Dream, the reader will find a surprising Wells extending your search to the fantastic and humorous to the motley recreation of a...read more »

The Sleeper is just an ordinary man, no one special, just someone going about his everyday business. Until one day he awakes, and finds that the world a...read more »