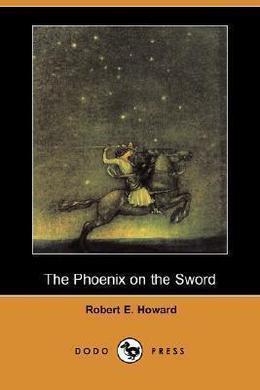 The Phoenix on the Sword

The Phoenix on the Sword begins with a middle-aged Conan of Cimmeria attempting to govern the turbulent kingdom of Aquilonia. Conan has recently seized the bloody crown of Aquilonia from King Numedides whom he strangled upon his throne; however, things have not gone well, as Conan is more suited to swinging a broadsword than to signing official documents with a stylus. The people of Aquilonia, who originally welcomed Conan as their liberator from Numedides’ tyranny, have gradually turned against him due to his foreign Cimmerian blood.

Over shadowy spire’s and gleaming towers lay the ghostly darkness and silence that runs before dawn. Into a dim alley, one of a veritable labyrinth of mysterious winding ways, four masked figures came hurriedly from a door which a dusky hand furtively opened. They spoke not but went swiftly into the gloom, cloaks wrapped closely about them; as silently as the ghosts of murdered men they disappeared in the darkness. Behind them a sardonic countenance was framed in the partly opened door; a pair of evil eyes glittered malevolently in the gloom.

“Go into the night, creatures of the night,” a voice mocked. “Oh, fools, your doom hounds your heels like a blind dog, and you know it not.” The speaker closed the door and bolted it, then turned and went up the corridor, candle in hand. He was a somber giant, whose dusky skin revealed his Stygian blood. He came into an inner chamber, where a tall, lean man in worn velvet lounged like a great lazy cat on a silken couch, sipping wine from a huge golden goblet.

“Well, Ascalante,” said the Stygian, setting down the candle, “your dupes have slunk into the streets like rats from their burrows. You work with strange tools.”

“Tools?” replied Ascalante. “Why, they consider me that. For months now, ever since the Rebel Four summoned me from the southern desert, I have been living in the very heart of my enemies, hiding by day in this obscure house, skulking through dark alleys and darker corridors at night. And I have accomplished what those rebellious nobles could not. Working through them, and through other agents, many of whom have never seen my face, I have honeycombed the empire with sedition and unrest. In short I, working in the shadows, have paved the downfall of the king who sits throned in the sun. By Mitra, I was a statesman before I was an outlaw.”

“And these dupes who deem themselves your masters?”

“They will continue to think that I serve them, until our present task is completed. Who are they to match wits with Ascalante? Volmana, the dwarfish count of Karaban; Gromel, the giant commander of the Black Legion; Dion, the fat baron of Attalus; Rinaldo, the hare-brained minstrel. I am the force which has welded together the steel in each, and by the clay in each, I will crush them when the time comes. But that lies in the future; tonight the king dies.”

“Days ago I saw the imperial squadrons ride from the city,” said the Stygian. “They rode to the frontier which the heathen Picts assail– thanks to the strong liquor which I’ve smuggled over the borders to madden them. Dion’s great wealth made that possible. And Volmana made it possible to dispose of the rest of the imperial troops which remained in the city. Through his princely kin in Nemedia, it was easy to persuade King Numa to request the presence of Count Trocero of Poitain, seneschal of Aquilonia; and of course, to do him honor, he’ll be accompanied by an imperial escort, as well as his own troops, and Prospero, King Conan’s right­hand man. That leaves only the king’s personal bodyguard in the city–besides the Black Legion. Through Gromel I’ve corrupted a spendthrift officer of that guard, and bribed him to lead his men away from the king’s door at midnight.

“Then, with sixteen desperate rogues of mine, we enter the palace by a secret tunnel. After the deed is done, even if the people do not rise to welcome us, Gromel’s Black Legion will be sufficient to hold the city and the crown.”

“And Dion thinks that crown will be given to him?”

“Yes. The fat fool claims it by reason of a trace of royal blood. Conan makes a bad mistake in letting men live who still boast descent from the old dynasty, from which he tore the crown of Aquilonia.