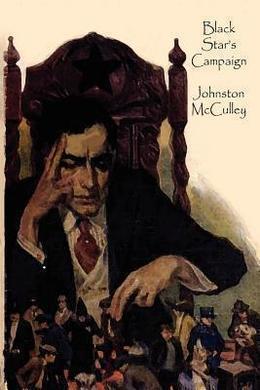 Probably McCulley’s second most popular character (after Zorro), The Black Star is a criminal mastermind, what was once termed a ‘gentleman criminal.’ He does not commit murder, nor does he permit any of his gang to kill – not even the police or his arch enemy, Roger Verbeck. The Black Star does not threaten women, always keeps his word, and is invariably courteous. Nor does he deal with narcotics in any of his stories. He is always seen in a black cloak and a black hood on which is embossed a jet black star. The Black Star and his gang use ‘vapor bombs’ and ‘vapor guns’ to render their victims instantly unconscious, a technique which pre-dated the Green Hornet’s gas gun by several decades.

Sheriff Kowen looked up from his desk in amazement as the stenographer ushered in the woman. The name on her card had told him nothing, and he had expected to be confronted by some middle-aged, washed-out, tired wife and mother who would make a request to visit the jail and talk with an erring relative.

What he did see when he raised his eyes and cleared his throat preparatory to indulging in his professional attitude, was a handsomely gowned, beautiful woman of perhaps thirty years, a woman who appeared to be exceedingly cultured and refined.

Sheriff Kowen got out of his chair quickly, and placed one at the end of the desk for his visitor. Then he seated himself again, and looked across to her.

She appeared to be nervous, almost distraught, on the verge of tears.

“My dear Miss Blanchard,” Sheriff Kowen said, glancing at the card the stenographer had handed to him, and for once forgetting his usual gruff manner, “is there any way in which I may be of service to you?”

“I scarcely know how to approach the subject,” she replied. The sheriff noticed that her voice was all that he had expected it would be–a voice that was modulated to the correct society pitch. “Such a thing as–as this is–well, I am not used to it.”

“Just take your time, and tell me in your own way,” said the sheriff. “You have–er–some sort of a complaint to make?”

“Yes, that is it. In the first place, we do not reside in this city regularly. We have a suite at a private hotel–my mother, my brother and myself. It is about my brother that I wish to see you.”

“Not exactly that, but–please tell me, first, Mr. Kowen, it is against the law to operate a gambling house, is it not?”

“It most certainly is!” Kowen exclaimed. “When I was first elected, I fought gambling houses–got quite a reputation for working along that line. I fought the cheap ones, and I fought the pretentious dress-suit establishments–cleaned them out!”

“Pardon me, Mr. Kowen, but one remains–else it is a new one that has opened recently.”

“What’s that?” the sheriff cried, sitting up straighter in his chair. “If there is a gambling house running in my section of the country, it’ll not run long!”

“I–I feel almost like a spy,” Miss Blanchard said. “I hate to be an informer—-“

“That is your duty in such a case, my dear young lady.”

“I feel it so, under the circumstances,” she said. “I do not want to cause my brother trouble–but I have talked it over with mother, and we decided that I should come and tell you the whole thing.”

“I shall be glad to listen, Miss Blanchard.”

“My brother is twenty-one, just a boy, you might say. When we came to the city, he happened to make the acquaintance of some other young men who belonged to a very fast set. He began remaining away from home until the early morning hours, and drinking too much, and all that.”

“I understand, my dear young lady. Nine young men out of ten sow their wild oats.”

“And he began spending more money than he could afford to spend. Mother and I began to fear he would dissipate his share of my father’s estate, for he controls it since he has come of age. We wondered where the money was going–and finally we found out.”

“Yes, sir. A gambling den in a large house in the most exclusive section of the city.”

“Those are the places I like to smash!” Sheriff Kowen told her.

“I can give you the address, Mr. Kowen. I understand that a man cannot get into the place unless he is properly introduced.”

“Naturally, they would be very careful,” the sheriff said.

“It is what you called a dress-suit sort of place. Perhaps I am doing wrong telling you this—-“

“Not at all. It is your duty,” the sheriff assured her. “Nobody ever will know where I got my information.”

“I’d like to have the place closed up,” Miss Blanchard continued, “so that my brother and other young men will not be robbed of their money and ruined. I suppose you would have to make a raid–I believe that is the term? I’d hate to cause my brother trouble, but a little scare might—-“

“I understand, Miss Blanchard. It is probable that he would be caught in a raid, placed under arrest for frequenting a gambling resort, and brought to jail. He would immediately put up bail for his appearance in court. He would give an assumed name, and not show up in the morning, forfeiting his bail. So there would be little publicity, but he would get a scare.”

“It can, my dear Miss Blanchard. We are determined to exterminate gambling houses. The court is in accord with me in this matter. Since you give me the information, you may be sure I’ll protect your brother’s interests to a certain extent. We’ll frighten him a bit, but you need have no fear he will serve a term in jail, or anything like that.”