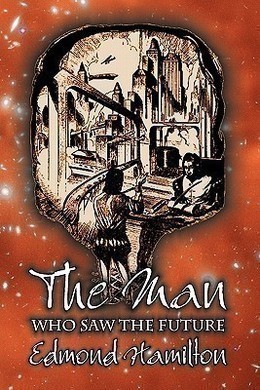 The Man Who Saw the Future

Paris, 1944. Two scientist, using their own invention, break the laws of time to conjure up an apothcary from 15th century Paris to the here and now. Showing him around the modern city and all its scientific breakthoughs, presenting him to their fellow scientist, before sending him back to his own time.

Jean de Marselait, Inquisitor Extraordinary of the King of France, raised his head from the parchments that littered the crude desk at which he sat. His glance shifted along the long stone-walled, torchlit room to the file of mail-clad soldiers who stood like steel statues by its door. A word from him and two of them sprang forward.

“You may bring in the prisoner,” he said.

The two disappeared through the door, and in moments there came a clang of opening bolts and grating of heavy hinges from somewhere in the building. Then the clang of the returning soldiers, and they entered the room with another man between them whose hands were fettered.

He was a straight figure, and was dressed in drab tunic and hose. His dark hair was long and straight, and his face held a dreaming strength, altogether different from the battered visages of the soldiers or the changeless mask of the Inquisitor. The latter regarded the prisoner for a moment, and then lifted one of the parchments from before him and read from it in a smooth, clear voice.

“Henri Lothiere, apothecary’s assistant of Paris,” he read, “is charged in this year of our lord one thousand four hundred and forty-four with offending against God and the king by committing the crime of sorcery.”

The prisoner spoke for the first time, his voice low but steady. “I am no sorcerer, sire.”

Jean de Marselait read calmly on from the parchment. “It is stated by many witnesses that for long that part of Paris, called Nanley by some, has been troubled by works of the devil. Ever and anon great claps of thunder have been heard issuing from an open field there without visible cause. They were evidently caused by a sorcerer of power since even exorcists could not halt them.

“It is attested by many that the accused, Henri Lothiere, did in spite of the known diabolical nature of the thing, spend much time at the field in question. It is also attested that the said Henri Lothiere did state that in his opinion the thunderclaps were not of diabolical origin, and that if they were studied, their cause might be discovered.

“It being suspected from this that Henri Lothiere was himself the sorcerer causing the thunderclaps, he was watched and on the third day of June was seen to go in the early morning to the unholy spot with certain instruments. There he was observed going through strange and diabolical conjurations, when there came suddenly another thunderclap and the said Henri Lothiere did vanish entirely from view in that moment. This fact is attested beyond all doubt.

“The news spreading, many hundreds watched around the field during that day. Upon that night before midnight, another thunderclap was heard and the said Henri Lothiere was seen by these hundreds to appear at the field’s center as swiftly and as strangely as he had vanished. The fear-stricken hundreds around the field heard him tell them how, by diabolical power, he had gone for hundreds of years into the future, a thing surely possible only to the devil and his minions, and heard him tell other blasphemies before they seized him and brought him to the Inquisitor of the King, praying that he be burned and his work of sorcery thus halted.

“Therefore, Henri Lothiere, since you were seen to vanish and to reappear as only the servants of the evil one might do, and were heard by many to utter the blasphemies mentioned, I must adjudge you a sorcerer with the penalty of death by fire. If anything there be that you can advance in palliation of your black offense, however, you may now do so before final sentence is passed upon you.”

Jean de Marselait laid down the parchment, and raised his eyes to the prisoner. The latter looked round him quickly for a moment, a half-glimpsed panic for an instant in his eyes, then seemed to steady.

“Sire, I cannot change the sentence you will pass upon me,” he said quietly, “yet do I wish well to relate once, what happened to me and what I saw. Is it permitted me to tell that from first to last?”

The Inquisitor’s head bent, and Henri Lothiere spoke, his voice gaining in strength and fervor as he continued.