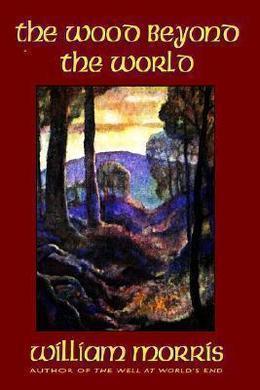 Wood Beyond the World

The Wood Beyond the World is a splendid tale, told in a romantic style and written in a pseudo-archaic English. The plot is full of tension, and the descriptions of the Wood, the characters, and the rustic scenery are all exquisitely painted. Morris was a founding member of the Pre-Raphaelite brotherhood, and perhaps the best way to think of this story is as the literary equivalent of a Waterhouse painting–brooding, mysterious, and enchanted.

Awhile ago there was a young man dwelling in a great and goodly city by the sea which had to name Langton on Holm. He was but of five and twenty winters, a fair-faced man, yellow-haired, tall and strong; rather wiser than foolisher than young men are mostly wont; a valiant youth, and a kind; not of many words but courteous of speech; no roisterer, nought masterful, but peaceable and knowing how to forbear: in a fray a perilous foe, and a trusty war-fellow. His father, with whom he was dwelling when this tale begins, was a great merchant, richer than a baron of the land, a head-man of the greatest of the Lineages of Langton, and a captain of the Porte; he was of the Lineage of the Goldings, therefore was he called Bartholomew Golden, and his son Golden Walter.

Now ye may well deem that such a youngling as this was looked upon by all as a lucky man without a lack; but there was this flaw in his lot, whereas he had fallen into the toils of love of a woman exceeding fair, and had taken her to wife, she nought unwilling as it seemed. But when they had been wedded some six months he found by manifest tokens, that his fairness was not so much to her but that she must seek to the foulness of one worser than he in all ways; wherefore his rest departed from him, whereas he hated her for her untruth and her hatred of him; yet would the sound of her voice, as she came and went in the house, make his heart beat; and the sight of her stirred desire within him, so that he longed for her to be sweet and kind with him, and deemed that, might it be so, he should forget all the evil gone by. But it was not so; for ever when she saw him, her face changed, and her hatred of him became manifest, and howsoever she were sweet with others, with him she was hard and sour.

So this went on a while till the chambers of his father’s house, yea the very streets of the city, became loathsome to him; and yet he called to mind that the world was wide and he but a young man. So on a day as he sat with his father alone, he spake to him and said: “Father, I was on the quays even now, and I looked on the ships that were nigh boun, and thy sign I saw on a tall ship that seemed to me nighest boun. Will it be long ere she sail?”

“Nay,” said his father, “that ship, which hight the Katherine, will they warp out of the haven in two days’ time. But why askest thou of her?”

“The shortest word is best, father,” said Walter, “and this it is, that I would depart in the said ship and see other lands.”

“Yea and whither, son?” said the merchant.

“Whither she goeth,” said Walter, “for I am ill at ease at home, as thou wottest, father.”

The merchant held his peace awhile, and looked hard on his son, for there was strong love between them; but at last he said: “Well, son, maybe it were best for thee; but maybe also we shall not meet again.”

“Yet if we do meet, father, then shalt thou see a new man in me.”

“Well,” said Bartholomew, “at least I know on whom to lay the loss of thee, and when thou art gone, for thou shalt have thine own way herein, she shall no longer abide in my house. Nay, but it were for the strife that should arise thenceforth betwixt her kindred and ours, it should go somewhat worse with her than that.”

Said Walter: “I pray thee shame her not more than needs must be, lest, so doing, thou shame both me and thyself also.”

Bartholomew held his peace again for a while; then he said: “Goeth she with child, my son?”

Walter reddened, and said: “I wot not; nor of whom the child may be.” Then they both sat silent, till Bartholomew spake, saying: “The end of it is, son, that this is Monday, and that thou shalt go aboard in the small hours of Wednesday; and meanwhile I shall look to it that thou go not away empty-handed; the skipper of the Katherine is a good man and true, and knows the seas well; and my servant Robert the Low, who is clerk of the lading, is trustworthy and wise, and as myself in all matters that look towards chaffer. The Katherine is new and stout-builded, and should be lucky, whereas she is under the ward of her who is the saint called upon in the church where thou wert christened, and myself before thee; and thy mother, and my father and mother all lie under the chancel thereof, as thou wottest.”

Therewith the elder rose up and went his ways about his business, and there was no more said betwixt him and his son on this matter.