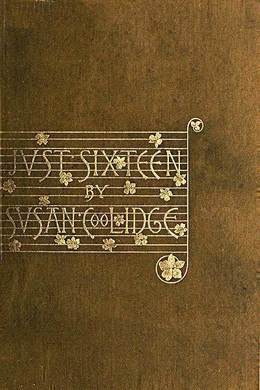 A collection of short stories from the author of the What Katy Did series, for an audience ranging from younger to older children - and enjoyable for adults too! They vary in style - fairy tales, humorous sketches, stories of everyday life, romances, children’s scrapes and practical advice - and include the Christmas story The Pink Sweetmeat.

The first real snow-storm of the winter had come to Sandyport by the Sea.

It had been a late and merciful autumn. Till well into November the leaves still clung to their boughs, honeysuckles made shady coverts on trellises, and put forth now and then an orange and milk-white blossom full of frosty sweetness; the grass was still green where the snow allowed it to be seen. Thick and fast fell the wind-blown flakes on the lightly frozen ground. The patter and beat of the flying storm was a joyous sound to children who owned sleds and had been waiting the chance to use them. Many a boy’s face looked out as the dusk fell, to make sure that the storm continued; and many a bright voice cried, “Hurrah! It’s coming down harder than ever! To-morrow it will be splendid!” Stable-men were shaking out fur robes and arranging cutters. Already the fitful sound of sleigh-bells could be heard; and all the world–the world of Sandyport that is–was preparing to give the in-coming winter a gay welcome.

But in one house in an old-fashioned but still respectable street no one seemed inclined to join in the general merry-making. Only two lights broke its darkness: one shone from the kitchen at the back, where, beside a kerosene lamp, Bethia Kendrick, the old-time servitor of the Talcott family, was gloomily darning stockings, and otherwise making ready for departure on the morrow. The other and fainter glow came from the front room, where without any lamp Georgie Talcott sat alone beside her fire.

It was a little fire, and built of rather queer materials. There were bits of lath and box-covers, fence-pickets split in two, shavings, pasteboard clippings, and on top of all, half of an old chopping-bowl. The light material burned out fast, and had to be continually replenished from the basket which stood on one side the grate.

Georgie, in fact, was burning up the odds and ends of her old life before leaving it behind forever. She was to quit the house on the morrow; and there was something significant to her, and very sorrowful, in this disposal of its shreds and fragments; they meant so little to other people, and so very much to her. The old chopping-bowl, for instance,–her thoughts went back from it to the first time she had ever been permitted to join in the making of the Christmas pies. She saw her mother, still a young woman then, and pretty with the faded elegance which had been her characteristic, weighing the sugar and plums, and slicing the citron, while her own daring little hands plied the chopper in that very bowl. What joy there was in those vigorous dabs and cross-way cuts! how she had liked to do it! And now, the pretty mother, faded and gray, lay under the frozen turf, on which the snow-flakes were thickly falling. There could be no more Christmases for Georgie in the old house; it was sold, and to-morrow would close its doors behind her forever.

She shivered as these thoughts passed through her mind, and rising moved restlessly toward the window. It was storming faster than ever. The sight seemed to make the idea of the morrow harder to bear; a big tear formed in each eye, blurring the white world outside into a dim grayness. Presently one ran down her nose and fell on her hand. She looked at it with dismay, wiped it hastily off, and went back to the fire.

“I won’t cry, whatever happens, I’m resolved on that,” she said half aloud, as she put the other half of the chopping-bowl on the waning blaze. The deep-soaked richness of long-perished meats was in the old wood still. It flared broadly up the chimney. Georgie again sat down by the fire and resumed her thinking.

“What am I going to do?” she asked herself for the hundredth time. “When my visit to Cousin Vi is over, I must decide on something; but what? A week is such a short time in which to settle such an important thing.”

It is hard to be confronted at twenty with the problem of one’s own support. Georgie hitherto had been as happy and care-free as other girls. Her mother, as the widow of a naval officer, was entitled to a small pension. This, with a very little more in addition, had paid for Georgie’s schooling, and kept the old house going in a sufficiently comfortable though very modest fashion. But Mrs. Talcott was not by nature an exemplary manager. It was hard not to overrun here and there, especially after Georgie grew up, and “took her place in society,” as the poor lady phrased it,–the place which was rightfully hers as her father’s daughter and the descendant of a long line of Talcotts and Chaunceys and Wainwrights. She coveted pretty things for her girl, as all mothers do, and it was too much for her strength always to deny herself.