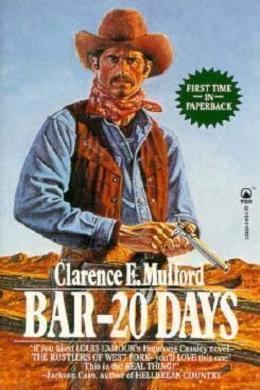 Master gunslinger Hopalong Cassidy confronts his ultimate challenge, Slim Travennes, the head of the Sandy Creek Vigilante Committee and a super-fast gunfighter who has never been beaten.

Two tired but happy punchers rode into the coast town and dismounted in front of the best hotel. Putting up their horses as quickly as possible they made arrangements for sleeping quarters and then hastened out to attend to business. Buck had been kind to delegate this mission to them and they would feel free to enjoy what pleasures the town might afford. While at that time the city was not what it is now, nevertheless it was capable of satisfying what demands might be made upon it by two very active and zealous cow-punchers. Their first experience began as they left the hotel.

“Hey, you cow-wrastlers!” said a not unpleasant voice, and they turned suspiciously as it continued: “You’ve shore got to hang up them guns with the hotel clerk while you cavorts around on this range. This is fence country.”

They regarded the speaker’s smiling face and twinkling eyes and laughed. “Well, yo’re the foreman if you owns that badge,” grinned Hopalong, cheerfully. “We don’t need no guns, nohow, in this town, we don’t. Plumb forgot we was toting them. But mebby you can tell us where lawyer Jeremiah T. Jones grazes in daylight?”

“Right over yonder, second floor,” replied the marshal. “An’ come to think of it, mebby you better leave most of yore cash with the guns–somebody’ll take it away from you if you don’t. It’d be an awful temptation, an’ flesh is weak.”

“Huh!” laughed Johnny, moving back into the hotel to leave his gun, closely followed by Hopalong. “Anybody that can turn that little trick on me an’ Hoppy will shore earn every red cent; why, we’ve been to Kansas City!”

As they emerged again Johnny slapped his pocket, from which sounded a musical jingling. “If them weak people try anything on us, we may come between them and their money!” he boasted.

“From the bottom of my heart I pity you,” called the marshal, watching them depart, a broad smile illuminating his face. “In about twenty-four hours they’ll put up a holler for me to go git it back for ‘em,” he muttered. “An’ I almost believe I’ll do it, too. I ain’t never seen none of that breed what ever left a town without empty pockets an’ aching heads–an’ the smarter they think they are the easier they fall.” A fleeting expression of discontent clouded the smile, for the lure of the open range is hard to resist when once a man has ridden free under its sky and watched its stars. “An’ I wish I was one of ‘em again,” he muttered, sauntering on.

Jeremiah T. Jones, Esq., was busy when his door opened, but he leaned back in his chair and smiled pleasantly at their bow-legged entry, waving them towards two chairs. Hopalong hung his sombrero on a letter press and tipped his chair back against the wall; Johnny hung grimly to his hat, sat stiffly upright until he noticed his companion’s pose, and then, deciding that everything was all right, and that Hopalong was better up in etiquette than himself, pitched his sombrero dexterously over the water pitcher and also leaned against the wall. Nobody could lose him when it came to doing the right thing.

“Well, gentlemen, you look tired and thirsty. This is considered good for all human ailments of whatsoever nature, degree, or wheresoever located, in part or entirety, ab initio,” Mr. Jones remarked, filling glasses. There was no argument and when the glasses were empty, he continued: “Now what can I do for you? From the Bar-20? Ah, yes; I was expecting you. We’ll get right at it,” and they did. Half an hour later they emerged on the street, free to take in the town, or to have the town take them in,–which was usually the case.

“What was that he said for us to keep away from?” asked Johnny with keen interest.

Johnny pulled tentatively at his upper lip but before he could reply his companion had accosted a stranger.

“Friend, we’re pilgrims in a strange land, an’ we don’t know the trails. Can you tell us where the docks are?”

“Certainly; glad to. You’ll find them at the end of this street,” and he smilingly waved them towards the section of the town which Jeremiah T. Jones had specifically and earnestly warned them to avoid.

“Wonder if you’re as thirsty as me?” solicitously inquired Hopalong of his companion.

“I was just wondering the same,” replied Johnny. “Say,” he confided in a lower voice, “blamed if I don’t feel sort of lost without that Colt. Every time I lifts my right laig she goes too high–don’t feel natural, nohow.”

“Same here; I’m allus feeling to see if I lost it,” Hopalong responded. “There ain’t no rubbing, no weight, nor nothing.”

“Wish I had something to put in its place, blamed if I don’t.”

“Why, now yo’re talking–mebby we can buy something,” grinned Hopalong, happily. “Here’s a hardware store–come on in.”

The clerk looked up and laid aside his novel. “Good-morning, gentlemen; what can I do for you? We’ve just got in some fine new rifles,” he suggested.