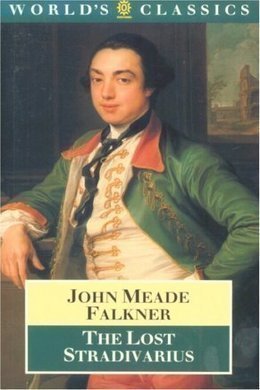 Chilling in the extreme, The Lost Stradivarius is a classic tale of the supernatural. While practicing in his rooms in Oxford, gifted violinist John Maltravers notices a strange phenomenon: whenever a certain air is played, a mysterious presence seems to enter. Unable to rationalize this away, Maltravers becomes increasingly unsettled, until he makes a startling discovery—tucked away in a hidden cupboard in his room is a priceless Stradivarius! Obsessed by his find, he becomes increasingly withdrawn from those around him, choosing instead to explore more sinister pursuits, little knowing the spell that this seemingly perfect violin is unleashing upon him.

Your father, John Maltravers, was born in 1820 at Worth, and succeeded his father and mine, who died when we were still young children. John was sent to Eton in due course, and in 1839, when he was nineteen years of age, it was determined that he should go to Oxford. It was intended at first to enter him at Christ Church; but Dr. Sarsdell, who visited us at Worth in the summer of 1839, persuaded Mr. Thoresby, our guardian, to send him instead to Magdalen Hall. Dr. Sarsdell was himself Principal of that institution, and represented that John, who then exhibited some symptoms of delicacy, would meet with more personal attention under his care than he could hope to do in so large a college as Christ Church. Mr. Thoresby, ever solicitous for his ward’s welfare, readily waived other considerations in favour of an arrangement which he considered conducive to John’s health, and he was accordingly matriculated at Magdalen Hall in the autumn of 1839.

Dr. Sarsdell had not been unmindful of his promise to look after my brother, and had secured him an excellent first-floor sitting-room, with a bedroom adjoining, having an aspect towards New College Lane.

I shall pass over the first two years of my brother’s residence at Oxford, because they have nothing to do with the present story. They were spent, no doubt, in the ordinary routine of work and recreation common in Oxford at that period.

From his earliest boyhood he had been passionately devoted to music, and had attained a considerable proficiency on the violin. In the autumn term of 1841 he made the acquaintance of Mr. William Gaskell, a very talented student at New College, and also a more than tolerable musician. The practice of music was then very much less common at Oxford than it has since become, and there were none of those societies existing which now do so much to promote its study among undergraduates. It was therefore a cause of much gratification to the two young men, and it afterwards became a strong bond of friendship, to discover that one was as devoted to the pianoforte as was the other to the violin. Mr. Gaskell, though in easy circumstances, had not a pianoforte in his rooms, and was pleased to use a fine instrument by D’Almaine that John had that term received as a birthday present from his guardian.

From that time the two students were thrown much together, and in the autumn term of 1841 and Easter term of 1842 practised a variety of music in John’s rooms, he taking the violin part and Mr. Gaskell that for the pianoforte.

It was, I think, in March 1842 that John purchased for his rooms a piece of furniture which was destined afterwards to play no unimportant part in the story I am narrating. This was a very large and low wicker chair of a form then coming into fashion in Oxford, and since, I am told, become a familiar object of most college rooms. It was cushioned with a gaudy pattern of chintz, and bought for new of an upholsterer at the bottom of the High Street.

Mr. Gaskell was taken by his uncle to spend Easter in Rome, and obtaining special leave from his college to prolong his travels; did not return to Oxford till three weeks of the summer term were passed and May was well advanced. So impatient was he to see his friend that he would not let even the first evening of his return pass without coming round to John’s rooms. The two young men sat without lights until the night was late; and Mr. Gaskell had much to narrate of his travels, and spoke specially of the beautiful music which he had heard at Easter in the Roman churches. He had also had lessons on the piano from a celebrated professor of the Italian style, but seemed to have been particularly delighted with the music of the seventeenth-century composers, of whose works he had brought back some specimens set for piano and violin.

It was past eleven o’clock when Mr. Gaskell left to return to New College; but the night was unusually warm, with a moon near the full, and John sat for some time in a cushioned window-seat before the open sash thinking over what he had heard about the music of Italy. Feeling still disinclined for sleep, he lit a single candle and began to turn over some of the musical works which Mr. Gaskell had left on the table. His attention was especially attracted to an oblong book, bound in soiled vellum, with a coat of arms stamped in gilt upon the side. It was a manuscript copy of some early suites by Graziani for violin and harpsichord, and was apparently written at Naples in the year 1744, many years after the death of that composer. Though the ink was yellow and faded, the transcript had been accurately made, and could be read with tolerable comfort by an advanced musician in spite of the antiquated notation.