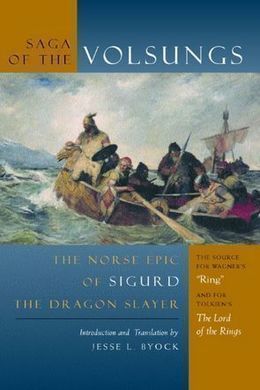 The Norse Epic of Sigurd the Dragon Slayer

One of the great books of world literature–an unforgettable tale of jealousy, unrequited love, greed, and vengeance. Based on Viking Age poems and composed in thirteenth-century Iceland, The Saga of the Volsungs combines mythology, legend, and sheer human drama in telling of the heroic deeds of Sigurd the dragon slayer, who acquires runic knowledge from one of Odin’s Valkyries. Yet the saga is set in a very human world, incorporating oral memories of the fourth and fifth centuries, when Attila the Hun and other warriors fought on the northern frontiers of the Roman empire. In his illuminating Introduction Jesse L. Byock links the historical Huns, Burgundians, and Goths with the extraordinary events of this Icelandic saga. With its ill-fated Rhinegold, the sword reforged, and the magic ring of power, the saga resembles the Nibelungenlied and has been a primary source for such fantasy writers as J. R. R. Tolkien and for Richard Wagner’s Ring cycle.

There was a dwelling of Kings ere the world was waxen old; Dukes were the door-wards there, and the roofs were thatched with gold; Earls were the wrights that wrought it, and silver nailed its doors; Earls’ wives were the weaving-women, queens’ daughters strewed its floors, And the masters of its song-craft were the mightiest men that cast The sails of the storm of battle adown the bickering blast. There dwelt men merry-hearted, and in hope exceeding great Met the good days and the evil as they went the way of fate: There the Gods were unforgotten, yea whiles they walked with men. Though e’en in that world’s beginning rose a murmur now and again Of the midward time and the fading and the last of the latter days, And the entering in of the terror, and the death of the People’s Praise.

Thus was the dwelling of Volsung, the King of the Midworld’s Mark, As a rose in the winter season, a candle in the dark; And as in all other matters ‘twas all earthly houses’ crown, And the least of its wall-hung shields was a battle-world’s renown, So therein withal was a marvel and a glorious thing to see, For amidst of its midmost hall-floor sprang up a mighty tree, That reared its blessings roofward, and wreathed the roof-tree dear With the glory of the summer and the garland of the year. I know not how they called it ere Volsung changed his life, But his dawning of fair promise, and his noontide of the strife, His eve of the battle-reaping and the garnering of his fame, Have bred us many a story and named us many a name; And when men tell of Volsung, they call that war-duke’s tree, That crownèd stem, the Branstock; and so was it told unto me.

So there was the throne of Volsung beneath its blossoming bower. But high o’er the roof-crest red it rose ‘twixt tower and tower, And therein were the wild hawks dwelling, abiding the dole of their lord; And they wailed high over the wine, and laughed to the waking sword.

Still were its boughs but for them, when lo on an even of May Comes a man from Siggeir the King with a word for his mouth to say: “All hail to thee King Volsung, from the King of the Goths I come: He hath heard of thy sword victorious and thine abundant home; He hath heard of thy sons in the battle, the fillers of Odin’s Hall; And a word hath the west-wind blown him, (full fruitful be its fall!) A word of thy daughter Signy the crown of womanhood: Now he deems thy friendship goodly, and thine help in the battle good, And for these will he give his friendship and his battle-aid again: But if thou wouldst grant his asking, and make his heart full fain, Then shalt thou give him a matter, saith he, without a price, –Signy the fairer than fair, Signy the wiser than wise.”

Such words in the hall of the Volsungs spake the Earl of Siggeir the Goth, Bearing the gifts and the gold, the ring, and the tokens of troth. But the King’s heart laughed within him and the King’s sons deemed it good; For they dreamed how they fared with the Goths o’er ocean and acre and wood, Till all the north was theirs, and the utmost southern lands.

But nought said the snow-white Signy as she sat with folded hands And gazed at the Goth-king’s Earl till his heart grew heavy and cold, As one that half remembers a tale that the elders have told, A story of weird and of woe: then spake King Volsung and said:

“A great king woos thee, daughter; wilt thou lie in a great king’s bed, And bear earth’s kings on thy bosom, that our name may never die?”

A fire lit up her face, and her voice was e’en as a cry: “I will sleep in a great king’s bed, I will bear the lords of the earth, And the wrack and the grief of my youth-days shall be held for nothing worth.”

Then would he question her kindly, as one who loved her sore, But she put forth her hand and smiled, and her face was flushed no more “Would God it might otherwise be! but wert thou to will it not, Yet should I will it and wed him, and rue my life and my lot.”