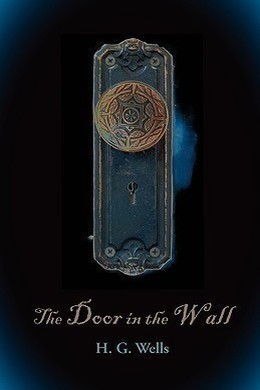 The Door in the Wall

The Door in the Wall, considered by both readers and critics, to be Wells’s finest tale, examines an issue to which Wells returned repeatedly in his writing: the contrast between aesthetics and science and the difficulty of choosing between them. This collection also includes The Star, A Dream of Armageddon, The Cone, A Moonlight Fable, The DiamondMaker, The Lord of the Dynamos, and The Country of the Blind.

One confidential evening, not three months ago, Lionel Wallace told me this story of the Door in the Wall. And at the time I thought that so far as he was concerned it was a true story.

He told it me with such a direct simplicity of conviction that I could not do otherwise than believe in him. But in the morning, in my own flat, I woke to a different atmosphere, and as I lay in bed and recalled the things he had told me, stripped of the glamour of his earnest slow voice, denuded of the focussed shaded table light, the shadowy atmosphere that wrapped about him and the pleasant bright things, the dessert and glasses and napery of the dinner we had shared, making them for the time a bright little world quite cut off from every-day realities, I saw it all as frankly incredible. “He was mystifying!” I said, and then: “How well he did it!…. . It isn’t quite the thing I should have expected him, of all people, to do well.”

Afterwards, as I sat up in bed and sipped my morning tea, I found myself trying to account for the flavour of reality that perplexed me in his impossible reminiscences, by supposing they did in some way suggest, present, convey–I hardly know which word to use–experiences it was otherwise impossible to tell.

Well, I don’t resort to that explanation now. I have got over my intervening doubts. I believe now, as I believed at the moment of telling, that Wallace did to the very best of his ability strip the truth of his secret for me. But whether he himself saw, or only thought he saw, whether he himself was the possessor of an inestimable privilege, or the victim of a fantastic dream, I cannot pretend to guess. Even the facts of his death, which ended my doubts forever, throw no light on that. That much the reader must judge for himself.

I forget now what chance comment or criticism of mine moved so reticent a man to confide in me. He was, I think, defending himself against an imputation of slackness and unreliability I had made in relation to a great public movement in which he had disappointed me. But he plunged suddenly. “I have” he said, “a preoccupation–”

“I know,” he went on, after a pause that he devoted to the study of his cigar ash, “I have been negligent. The fact is–it isn’t a case of ghosts or apparitions–but–it’s an odd thing to tell of, Redmond–I am haunted. I am haunted by something–that rather takes the light out of things, that fills me with longings …. .”

He paused, checked by that English shyness that so often overcomes us when we would speak of moving or grave or beautiful things. “You were at Saint Athelstan’s all through,” he said, and for a moment that seemed to me quite irrelevant. “Well”–and he paused. Then very haltingly at first, but afterwards more easily, he began to tell of the thing that was hidden in his life, the haunting memory of a beauty and a happiness that filled his heart with insatiable longings that made all the interests and spectacle of worldly life seem dull and tedious and vain to him.

Now that I have the clue to it, the thing seems written visibly in his face. I have a photograph in which that look of detachment has been caught and intensified. It reminds me of what a woman once said of him–a woman who had loved him greatly. “Suddenly,” she said, “the interest goes out of him. He forgets you. He doesn’t care a rap for you–under his very nose … . .”

Yet the interest was not always out of him, and when he was holding his attention to a thing Wallace could contrive to be an extremely successful man. His career, indeed, is set with successes. He left me behind him long ago; he soared up over my head, and cut a figure in the world that I couldn’t cut–anyhow. He was still a year short of forty, and they say now that he would have been in office and very probably in the new Cabinet if he had lived. At school he always beat me without effort–as it were by nature. We were at school together at Saint Athelstan’s College in West Kensington for almost all our school time. He came into the school as my co-equal, but he left far above me, in a blaze of scholarships and brilliant performance. Yet I think I made a fair average running. And it was at school I heard first of the Door in the Wall–that I was to hear of a second time only a month before his death.

To him at least the Door in the Wall was a real door leading through a real wall to immortal realities. Of that I am now quite assured.