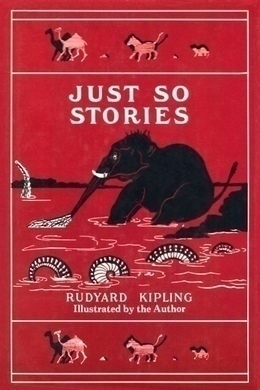 The famous, funny, and inspiring stories of creation as readers have never heard them before. From the tale of how the leopard got his spots to the crab who played with the sea, from the ingenious invention of the alphabet to how the rhinoceros got his wrinkled skin, these stories of strange happenings in the High and Far-Off Times brim with life, humor, and magic. Drawing from the oral storytelling traditions of India and Africa, Noble prize winner Rudyard Kipling’s vigorous, amusing tales offer imaginative answers to unanswered questions about animals and provide little pearls of wisdom. These classic tales, filled with playfully clever animals and people have entertained young and old alike for over a hundred years.

In the sea, once upon a time, O my Best Beloved, there was a Whale, and he ate fishes. He ate the starfish and the garfish, and the crab and the dab, and the plaice and the dace, and the skate and his mate, and the mackereel and the pickereel, and the really truly twirly-whirly eel. All the fishes he could find in all the sea he ate with his mouth–so! Till at last there was only one small fish left in all the sea, and he was a small ‘Stute Fish, and he swam a little behind the Whale’s right ear, so as to be out of harm’s way. Then the Whale stood up on his tail and said, ‘I’m hungry.’ And the small ‘Stute Fish said in a small ‘stute voice, ‘Noble and generous Cetacean, have you ever tasted Man?’

‘Then fetch me some,’ said the Whale, and he made the sea froth up with his tail.

‘One at a time is enough,’ said the ‘Stute Fish. ‘If you swim to latitude Fifty North, longitude Forty West (that is magic), you will find, sitting on a raft, in the middle of the sea, with nothing on but a pair of blue canvas breeches, a pair of suspenders (you must not forget the suspenders, Best Beloved), and a jack-knife, one shipwrecked Mariner, who, it is only fair to tell you, is a man of infinite-resource-and-sagacity.’

So the Whale swam and swam to latitude Fifty North, longitude Forty West, as fast as he could swim, and on a raft, in the middle of the sea, with nothing to wear except a pair of blue canvas breeches, a pair of suspenders (you must particularly remember the suspenders, Best Beloved), and a jack-knife, he found one single, solitary shipwrecked Mariner, trailing his toes in the water. (He had his mummy’s leave to paddle, or else he would never have done it, because he was a man of infinite-resource-and-sagacity.)

Then the Whale opened his mouth back and back and back till it nearly touched his tail, and he swallowed the shipwrecked Mariner, and the raft he was sitting on, and his blue canvas breeches, and the suspenders (which you must not forget), and the jack-knife–He swallowed them all down into his warm, dark, inside cupboards, and then he smacked his lips–so, and turned round three times on his tail.

So he said to the ‘Stute Fish, ‘This man is very nubbly, and besides he is making me hiccough. What shall I do?’

‘Tell him to come out,’ said the ‘Stute Fish.

So the Whale called down his own throat to the shipwrecked Mariner, ‘Come out and behave yourself. I’ve got the hiccoughs.’

‘Nay, nay!’ said the Mariner. ‘Not so, but far otherwise. Take me to my natal-shore and the white-cliffs-of-Albion, and I’ll think about it.’ And he began to dance more than ever.

‘You had better take him home,’ said the ‘Stute Fish to the Whale. ‘I ought to have warned you that he is a man of infinite-resource-and-sagacity.’