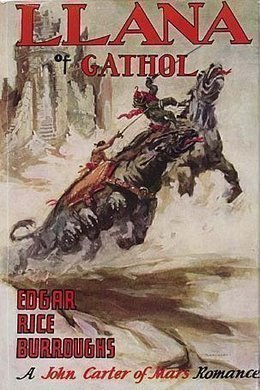 Llano of Gathol is a collection of four novellas written in the Martian series of Edgar Rice Burroughs. Llano, the daughter of Gahan of Gothol, is the perfect damsel in distress. The first story, The Ancient Dead (originally The City of Mummies) followed by The Black Pirates of Barsoom, Escape on Mars and finally Invisible Men of Mars. The four books in this series is truly comprised of parody and satire. These books are a good laugh with many futuristic encounters and wild characters.

No matter how instinctively gregarious one may be there are times when one longs for solitude. I like people. I like to be with my family, my friends, my fighting men; and probably just because I am so keen for companionship, I am at times equally keen to be alone. It is at such times that I can best resolve the knotty problems of government in times of war or peace. It is then that I can meditate upon all the various aspects of a full life such as I lead; and, being human, I have plenty of mistakes upon which to meditate that I may fortify myself against their recommission.

When I feel that strange urge for solitude coming over me, it is my usual custom to take a one man flier and range the dead sea bottoms and the other uninhabited wildernesses of this dying planet; for there indeed is solitude. There are vast areas on Mars where no human foot has ever trod, and other vast areas that for thousands of years have known only the giant green men, the wandering nomads of the ocher deserts.

Sometimes I am away for weeks on these glorious adventures in solitude. Because of them, I probably know more of the geography and topography of Mars than any other living man; for they and my other adventurous excursions upon the planet have carried me from the Lost Sea of Korus, in the Valley Dor at the frozen South to Okar, land of the black bearded yellow men of the frozen North, and from Kaol to Bantoom; and yet there are many parts of Barsoom that I have not visited, which will not seem so strange when there is taken into consideration the fact that although the area of Mars is like more than one fourth that of Earth its land area is almost eight million square miles greater. That is because Barsoom has no large bodies of surface water, its largest known ocean being entirely subterranean. Also, I think you will admit, fifty-six million square miles is a lot of territory to know thoroughly.

Upon the occasion of which I am about to tell you I flew northwest from Helium, which lies 30 degrees south of the equator which I crossed about sixteen hundred miles east of Exum, the Barsoomian Greenwich. North and west of me lay a vast, almost unexplored region; and there I thought to find the absolute solitude for which I craved.

I had set my directional compass upon Horz, the long deserted city of ancient Barsoomian culture, and loafed along at seventy-five miles an hour at an altitude of five hundred to a thousand feet. I had seen some green men northeast of Torquas and had been forced up to escape their fire, which I did not return as I was not seeking adventure; and I had crossed two thin ribbons of red Martian farm land bordering canals that bring the precious waters from the annually melting ice caps at the poles. Beyond these I saw no signs of human life in all the five thousand miles that lie between Lesser Helium and Horz.

It is always a little saddening to me to look down thus upon a dying world, to scan the endless miles of ocher, mosslike vegetation which carpets the vast areas where once rolled the mighty oceans of a young and virile Mars, to ponder that just beneath me once ranged the proud navies and the merchant ships of a dozen rich and powerful nations where today the fierce banth roams a solitude whose silence is unbroken except for the roars of the killer and the screams of the dying.

At night I slept, secure in the knowledge that my directional compass would hold a true course for Horz and always at the altitude for which I had set it–a thousand feet, not above sea level but above the terrain over which the ship was passing. These amazing little instruments may be set for any point upon Barsoom and at any altitude. If one is set for a thousand feet, as mine was upon this occasion, it will not permit the ship to come closer than a thousand feet to any object, thus eliminating even the danger of collision; and when the ship reaches its objective the compass will stop it a thousand feet above. The pilot whose ship is equipped with one of these directional compasses does not even have to remain awake; thus I could travel day and night without danger.

It was about noon of the third day that I sighted the towers of ancient Horz.

The oldest part of the city lies upon the edge of a vast plateau; the newer portions, and they are countless thousands of years old, are terraced downward into a great gulf, marking the hopeless pursuit of the receding sea upon the shores of which this rich and powerful city once stood. The last poor, mean structures of a dying race have either disappeared or are only mouldering ruins now; but the splendid structures of her prime remain at the edge of the plateau, mute but eloquent reminders of her vanished grandeur–enduring monuments to the white-skinned, fair-haired race which has vanished forever.