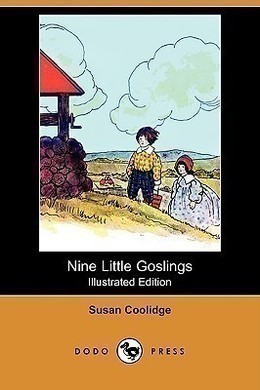 Nine Little Goslings is a collection of short stories - of which there are nine - from the author of What Katy Did. Aimed very much at the young reader all will enthrall, and for those who are fans of Katy, the first story is about Johnnie (sister to Katy and Clover) and set a year after What Katy Did at School.

When a little girl is six and a little boy is six, they like pretty much the same things and enjoy pretty much the same games. She wears an apron, and he a jacket and trousers, but they are both equally fond of running races, spinning tops, flying kites, going down hill on sleds, and making a noise in the open air. But when the little girl gets to be eleven or twelve, and to grow thin and long, so that every two months a tuck has to be let down in her frocks, then a great difference becomes visible. The boy goes on racing and whooping and comporting himself generally like a young colt in a pasture; but she turns quiet and shy, cares no longer for rough play or exercise, takes droll little sentimental fancies into her head, and likes best the books which make her cry. Almost all girls have a fit of this kind some time or other in the course of their lives; and it is rather a good thing to have it early, for little folks get over such attacks more easily than big ones. Perhaps we may live to see the day when wise mammas, going through the list of nursery diseases which their children have had, will wind up triumphantly with, “Mumps, measles, chicken-pox,–and they are all over with ‘Amy Herbert,’ ‘The Heir of Redclyffe,’ and the notion that they are going to be miserable for the rest of their lives!”

Sometimes this odd change comes after an illness when a little girl feels weak and out of sorts, and does not know exactly what is the matter. This is the way it came to Johnnie Carr, a girl whom some of you who read this are already acquainted with. She had intermittent fever the year after her sisters Katy and Clover came from boarding-school, and was quite ill for several weeks. Everybody in the house was sorry to have Johnnie sick. Katy nursed, petted, and cosseted her in the tenderest way. Clover brought flowers to the bedside and read books aloud, and told Johnnie interesting stories. Elsie cut out paper dolls for her by dozens, painted their cheeks pink and their eyes blue, and made for them beautiful dresses and jackets of every color and fashion. Papa never came in without some little present or treat in his pocket for Johnnie. So long as she was in bed, and all these nice things were doing for her, Johnnie liked being ill very much, but when she began to sit up and go down to dinner, and the family spoke of her as almost well again, then a time of unhappiness set in. The Johnnie who got out of bed after the fever was not the Johnnie of a month before. There were two inches more of her for one thing, for she had taken the opportunity to grow prodigiously, as sick children often do. Her head ached at times, her back felt weak, and her legs shook when she tried to run about. All sorts of queer and disagreeable feelings attacked her. Her hair had fallen out during the fever so that Papa thought it best to have it shaved close. Katy made a pretty silk-lined cap for her to wear, but the girls at school laughed at the cap, and that troubled Johnnie very much. Then, when the new hair grew, thick and soft as the plumy down on a bird’s wing, a fresh affliction set in, for the hair came out in small round rings all over her head, which made her look like a baby. Elsie called her “Curly,” and gradually the others adopted the name, till at last nobody used any other except the servants, who still said “Miss Johnnie.” It was hard to recognize the old Johnnie, square and sturdy and full of merry life, in poor, thin, whining Curly, always complaining of something, who lay on the sofa reading story-books, and begging Phil and Dorry to let her alone, not to tease her, and to go off and play by themselves. Her eyes looked twice as big as usual, because her face was so small and pale, and though she was still a pretty child, it was in a different way from the old prettiness. Katy and Clover were very kind and gentle always, but Elsie sometimes lost patience entirely, and the boys openly declared that Curly was a cross-patch, and hadn’t a bit of fun left in her.

One afternoon she was lying on the sofa with the “Wide Wide World” in her hand. Her eyelids were very red from crying over Alice’s death, but she had galloped on, and was now reading the part where Ellen Montgomery goes to live with her rich relatives in Scotland.

“Oh, dear,” sighed Johnnie. “How splendid it was for her! Just think, Clover, riding lessons, and a watch, and her uncle takes her to see all sorts of places, and they call her their White Rose! Oh, dear! I wish we had relations in Scotland.”

“We haven’t, you know,” remarked Clover, threading her needle with a fresh bit of blue worsted.

“I know it. It’s too bad. Nothing ever does happen in this stupid place. The girls in books always do have such nice times. Ellen could leap, and she spoke French _beau_tifully. She learned at that place, you know, the place where the Humphreys lived.”