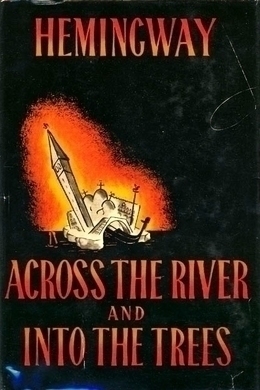 Across the River and Into the Trees

In the fall of 1948, Ernest Hemingway made his first extended visit to Italy in thirty years. His reacquaintance with Venice, a city he loved, provided the inspiration for Across the River and into the Trees, the story of Richard Cantwell, a war-ravaged American colonel stationed in Italy at the close of the Second World War, and his love for a young Italian countess. A poignant, bittersweet homage to love that overpowers reason, to the resilience of the human spirit, and to the worldweary beauty and majesty of Venice, Across the River and into the Trees stands as Hemingway’s statement of defiance in response to the great dehumanizing atrocities of the Second World War. Hemingway’s last full-length novel published in his lifetime, it moved John O’Hara in The New York Times Book Review to call him ‘the most important author since Shakespeare.’

They started two hours before daylight, and at first, it was not necessary to break the ice across the canal as other boats had gone on ahead. In each boat, in the darkness, so you could not see, but only hear him, the poler stood in the stern, with his long oar. The shooter sat on a shooting stool fastened to the top of a box that contained his lunch and shells, and the shooter’s two, or more, guns were propped against the load of wooden decoys. Somewhere, in each boat, there was a sack with one or two live mallard hens, or a hen and a drake, and in each boat there was a dog who shifted and shivered uneasily at the sound of the wings of the ducks that passed overhead in the darkness.

Four of the boats went on up the main canal towards the big lagoon to the north. A fifth boat had already turned off into a side canal. Now, the sixth boat turned south into a shallow lagoon, and there was no broken water.

It was all ice, new-frozen during the sudden, windless cold of the night. It was rubbery and bending against the thrust of the boatman’s oar. Then it would break as sharply as a pane of glass, but the boat made little forward progress.

‘Give me an oar,’ the shooter in the sixth boat said. He stood up and braced himself carefully. He could hear the ducks passing in the darkness, and feel the restless lurching of the dog. To the north he heard the sound of breaking ice from the other boats.

‘Be careful,’ the poler in the stern said. ‘Don’t tip the boat over.’

‘I am a boatman, too,’ the shooter said.

He took the long oar the boatman handed him and reversed it so he could hold it by the blade. Holding the blade he reached forward and punched the handle through the ice. He felt the firm bottom of the shallow lagoon, put his weight on the top of the wide oar-blade, and holding with both hands and, first pulling, then shoving, until the pole-hold was well to the stern, he drove the boat ahead to break the ice. The ice broke like sheets of plate glass as the boat drove into it, and onto it, and astern the boatman shoved them ahead into the broken passage.

After a while, the shooter, who was working hard and steadily and sweating in his heavy clothes, asked the boatman, ‘Where is the shooting barrel?’

‘Off there to the left. In the middle of the next bay.’

‘Should I turn for it now?’

‘What do you mean, as I wish? You know the water. Is there water to carry us there?’

‘It will be daylight before we get there if we don’t hurry.’

The boatman did not answer.

All right, you surly jerk, the shooter thought to himself. We are going to get there. We’ve made two-thirds of the way now and if you are worried about having to work to break ice to pick up birds, that is altogether too bad.

‘Get your back in it, jerk,’ he said in English.

‘What?’ the boatman asked in Italian.

It was daylight before they reached the oaken-staved hogshead sunk in the bottom of the lagoon. It was surrounded by a sloping rim of earth that had been planted with sedge and grass, and the shooter swung carefully up onto this, feeling the frozen grasses break as he stepped on them. The boatman lifted the combination shooting stool and shell box out of the boat and handed it to the shooter, who leaned over and placed it in the bottom of the big barrel.

The shooter, wearing his hip boots and an old combat jacket, with a patch on the left shoulder that no one understood, and with the slight light places on the straps, where stars had been removed, climbed down into the barrel and the boatman handed him his two guns.

He placed them against the wall of the barrel and hung his other shell bag between them, hanging it on two hooks built into the wall of the sunken barrel. Then he leaned the guns against each side of the shell bag.

‘Is there water?’ he asked the boatman.

‘No water,’ the boatman said.

‘Can you drink the lagoon water?’

The shooter was thirsty from the hard work of breaking the ice and driving the boat in and he felt his anger rise, and then held it, and said, ‘Can I help you in the boat to break ice to put out the decoys?’

‘No,’ the boatman said and shoved the boat savagely out on to the thin sheet ice that cracked and ripped as the boat drove up on to it. The boatman commenced smashing at the ice with the blade of his oar and then started tossing decoys out to the side and behind him.

He’s in a beautiful mood, the shooter thought. He’s a big brute, too. I worked like a horse coming out here. He just pulled his weight and that’s all. What the hell is eating him? This is his trade, isn’t it?