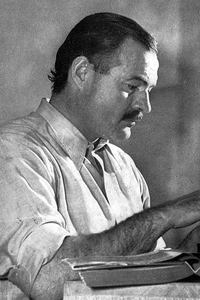 Ernest Miller Hemingway was an American author and journalist. His economical and understated style had a strong influence on 20th-century fiction, while his life of adventure and his public image influenced later generations. Hemingway produced most of his work between the mid-1920s and the mid-1950s, and won the Nobel Prize in Literature in 1954. He published seven novels, six short story collections, and two non-fiction works. Additional works, including three novels, four short story collections, and three non-fiction works, were published posthumously. Many of his works are considered classics of American literature.

In the fall of 1948, Ernest Hemingway made his first extended visit to Italy in thirty years. His reacquaintance with Venice, a city he loved, provided ...read more »

Among these small, reflective sketches are unforgettable encounters with the members of Hemingway’s slightly rag-tag circle of artists and writers, some...read more »

Still considered one of the best books ever written about bullfighting, this is an impassioned look at the sport by one of its true aficionados. It refl...read more »

His second major venture into nonfiction (after Death in the Afternoon), Green Hills of Africa is Ernest Hemingway’s lyrical journal of a month on safar...read more »

A strikingly original collection of short stories and accompanying vignettes that marked Ernest Hemingway’s American debut. When published, it was prais...read more »

Representing some of Hemingway’s most important and compelling early writing. In these 14 stories, Hemingway begins to examine the themes that would occ...read more »

Set in the Gulf Stream off the coast of Havana, Hemingway’s magnificent fable is the story of an old man, a young boy and a giant fish. In a perfectly c...read more »

A poignant look at the disillusionment and angst of the post-World War I generation, the novel introduces two of Hemingway’s most unforgettable characte...read more »

A hilarious parody of the Chicago school of literature. Poking fun at that “great race” of writers, it depicts a vogue that Hemingway himself refused to...read more »

Ernest Hemingway’s first new book of fiction, since the publication of A Farewell to Arms, contains fourteen stories of varying length. Some of them hav...read more »