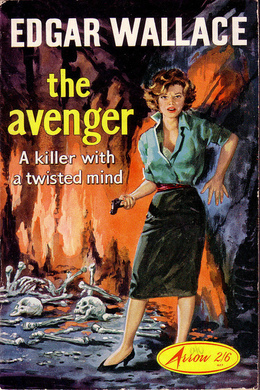 Francis Elmer has vanished, and all that is found is a typed note signed ‘The Head Hunter’. Elmer’s niece Adele Leamington is an extra at the Knebworth Film Corporation. The actress Stella Mendoza keeps the whole set waiting to shoot, in the best Hollywood tradition, but her starring role is given to Adele. Surprised by Mike Brixan as she is learning her lines, Adele drops the typed script. The ‘v’ letters are blurred and the ‘g’ is indistinct. Mike turns white…

Captain Mike Brixan had certain mild and innocent superstitions. He believed, for example, that if he saw a green crow in a field he would certainly see another green crow before the day was out. And when, at the bookstand on Aix-la-Chapelle station, he saw and purchased a dime novel that was comprehensively entitled “Only an Extra, or the Pride of Hollywood”, he was less concerned as to how this thrilling and dog-eared romance came to be on offer at half a million marks (this was in the days when marks were worth money) than as to the circumstances in which he would again hear or read the word “extras” in the sense of a supernumerary and unimportant screen actress.

The novel did not interest him at all. He read one page of superlatives and, turned for relief to the study of a Belgian time-table. He was bored, but not so bored that he could interest himself in the sensational rise of the fictitious Rosa Love from modest obscurity to a press agent and wealth.

But “extra” was a new one on Michael, and he waited for the day to bring its inevitable companion.

To say that he was uninterested in crime, that burglars were less thrilling than golf scores, and the record of murders hardly worth the reading, might convey a wrong impression to those who knew him as the cleverest agent in the Foreign Office Intelligence Department.

His official life was spent in meeting queer Continentals in obscure restaurants and, in divers roles, to learn of the undercurrents that were drifting the barques of diplomacy to unsuspected ports. He had twice roamed through Europe in the guise of an open-mouthed tourist; had canoed many hundred miles through the gorges of the Danube to discover, in little riverside beer-houses, the inward meanings of secret mobilizations. These were tasks wholly to his liking.

Therefore he was not unnaturally annoyed when he was withdrawn from Berlin at a moment when, as it seemed, the mystery of the Slovak Treaty was in a way to being solved, for he had secured, at a cost, a rough but accurate draft.

“I should have had a photograph of the actual document if you had left me another twenty-four hours,” he reproached his chief, Major George Staines, when he reported himself at Whitehall next morning.

“Sony,” replied that unrepentant man, “but the truth is, we’ve had a heart-to-heart talk with the Slovakian Prime Minister, and he has promised to behave and practically given us the text of the treaty–it was only a commercial affair. Mike, did you know Elmer?”

The Foreign Office detective sat down on the edge of the table.

“Have you brought me from Berlin to ask me that?” he demanded bitterly. “Have you taken me from my favourite café on Unter den Linden–by the way, the Germans are making small-arm ammunition by the million at a converted pencil factory in Bavaria–to discuss Elmer? He’s a clerk, isn’t he?”

“He was,” he said, “in the Accountancy Department. He disappeared from view three weeks ago, and an examination of his books showed that he had been systematically stealing funds which were under his control.”

Mike Brixan made a little face.

“I’m sorry to hear that,” he said. “He seemed to be a fairly quiet and inoffensive man. But surely you don’t want me to go after him? That is a job for Scotland Yard.”

“I don’t want you to go after him,” said Staines slowly, “because–well, he has been found.”

There was something very significant and sinister in his tone, and, before he could take the little slip of paper from the portfolio on the desk, Michael Brixan knew what was coming.

He handed the typewritten slip across to his sub ordinate, and Michael read:

“You will find a box in the hedge by the railway arch at Esher. The Head-Hunter.”