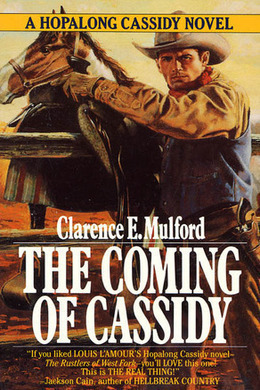 The Coming of Cassidy

Buck Peters put everything he owned into the Bar-20 and thought he could make a go of it. It looked pretty good too, until he fell in with that gang of renegade buffalo hunters. There were after his spread, his cattle, his life. And they swore to let nothing stand in their way. Nothing. And then they met a cowhand named Cassidy…

The trail boss shook his fist after the departing puncher and swore softly. He hated to lose a man at this time and he had been a little reckless in threatening to “fire” him; but in a gun-fighting outfit there was no room for a hothead. “Cimarron” was boss of the outfit that was driving a large herd of cattle to California, a feat that had been accomplished before, but that no man cared to attempt the second time. Had his soul been enriched by the gift of prophecy he would have turned back. As it was he returned to the work ahead of him. “Aw, let him go,” he growled. “He ‘s wuss off ‘n I am, an’ he ‘ll find it out quick. I never did see nobody what got crazy mad so quick as him.”

“Bill” Cassidy, not yet of age, but a man in stature and strength, rode north because it promised him civilization quicker than any other way except the back trail, and he was tired of the coast range. He had forgotten the trail-boss during the last three days of his solitary journeying and the fact that he was in the center of an uninhabited country nearly as large as a good-sized state gave him no concern; he was equipped for two weeks, and fortified by youth’s confidence.

All day long he rode, around mesas and through draws, detouring to avoid canyons and bearing steadily northward with a certainty that was a heritage. Gradually the great bulk of mesas swung off to the west, and to the east the range grew steadily more level as it swept toward the peaceful river lying in the distant valley like a carelessly flung rope of silver. The forest vegetation, so luxuriant along the rivers and draws a day or two before, was now rarely seen, while chaparrals and stunted mesquite became more common.

He was more than twenty-five hundred feet above the ocean, on a great plateau broken by mesas that stretched away for miles in a vast sea of grass. There was just enough tang in the dry April air to make riding a pleasure and he did not mind the dryness of the season. Twice that day he detoured to ride around prairie-dog towns and the sight of buffalo skeletons lying in groups was not rare. Alert and contemptuous gray wolves gave him a passing glance, but the coyotes, slinking a little farther off, watched him with more interest. Occasionally he had a shot at antelope and once was successful.

Warned by the gathering dusk he was casting about for the most favorable spot for his blanket and fire when a horseman swung into sight out of a draw and reined in quickly. Bill’s hand fell carelessly to his side while he regarded the stranger, who spoke first, and with a restrained welcoming gladness in his voice. “Howd’y, Stranger! You plumb surprised me.”

Bill’s examination told him that the other was stocky, compactly built, with a pleasing face and a “good eye.” His age was about thirty and the surface indications were very favorable. “Some surprised myself,” he replied. “Ridin’ my way?”

“Far’s th’ house,” smiled the other. “Better join us. Couple of buffalo hunters dropped in awhile back.”

“They ‘ll go a long way before they ‘ll find buffalo,” Bill responded, suspiciously. Glancing around he readily picked out the rectangular blot in the valley, though it was no easy feat. “Huntin’ or ranchin’?” he inquired in tones devoid of curiosity.

“Ranchin’,” smiled the other. “Hefty proposition, up here, I reckon. Th’ wolves ‘ll walk in under yore nose. But I ain’t seen no Injuns.”

“You will,” was the calm reply. “You ‘ll see a couple, first; an’ then th’ whole cussed tribe. They ain’t got no buffalo no more, neither.”

Buck glanced at him sharply and thought of the hunters, but he nodded. “Yes. But if that couple don’t go back?” he asked, referring to the Indians.

“Then you ‘ll save a little time.”

“Well, let ‘em come. I ‘m here to stay, one way or th’ other. But, anyhow, I ain’t got no border ruffians like they have over in th’ Panhandle. They ‘re worse ‘n Injuns.”

“Yes,” agreed Bill. “Th’ war ain’t ended yet for some of them fellers. Ex-guerrillas, lots of ‘em.”

When they reached the house the buffalo hunters were arguing about their next day’s ride and the elder, looking up, appealed to Bill. “Howd’y, Stranger. Ain’t come ‘cross no buffaler signs, hev ye?”

“What ‘d I tell you?” triumphantly exclaimed the younger hunter.

“Well, they ain’t much dif’rence, is they?” growled his companion.

Bill missed nothing the hunters said or did and during the silent meal had a good chance to study their faces. When the pipes were going and the supper wreck cleaned away, Buck leaned against the wall and looked across the room at the latest arrival. “Don’t want a job, do you?” he asked.