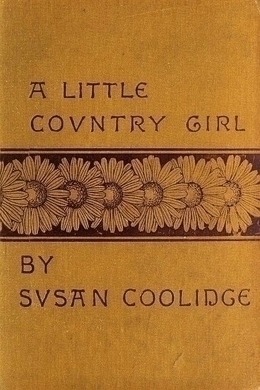 Candace makes the first long trip of her young life alone. Everything is new, from the ocean views, to the fashionable people she encounters; from the museum-like home, to the unfamiliar cousins. How will she adapt to the new experiences and will she overcome the homesickness she feels? Will she adapt her country ways and enter society, or be an embarrassment to her fine relations? Etiquette and style can be learned; but kindness, common sense and a loving heart are inbred. (source: Librivox)

It was on one of the cool, brilliant days which early June brings to the Narragansett country, that the steamer “Eolus” pushed out from Wickford Pier on her afternoon trip to Newport. The sky was of a beautiful translucent blue; the sunshine had a silvery rather than a golden radiance. A sea-wind blew up the Western Passage, so cool as to make the passengers on the upper deck glad to draw their wraps about them. The low line of the mainland beyond Conanicut and down to Beaver Tail glittered with a sort of clear-cut radiance, and seemed lifted a little above the water. Candace Arden heard the Captain say that he judged, from the look of things, that there was going to be a change of weather before long.

Captain Peleg King was a great favorite on his line of travel. He had a pleasant, shrewd face, grizzled hair, a spare, active figure; and he seemed to notice every one of his passengers and to take an interest in them.

“Going down to Newport, Miss?” he said to Candace, after giving her one or two quick looks.

The question was superfluous, for the “Eolus” went nowhere else except to Newport; but it was well-meant, for the Captain thought that Candace seemed lonely and ill at ease, and he wished to cheer her.

“Your folks there for the summer?” he went on.

“Mrs. Courtenay Gray you mean, I guess. Well, it’s queer, but I sort er thought that you favored her a little. She’s down early this year. I fetched her and the family across on my evening trip more’n two weeks ago. Mrs. Gray’s a mighty nice lady; I’m always pleased when she comes aboard. Wouldn’t you like to take a seat in the wheel-house, Miss? The wind’s blowing pretty fresh.”

Candace was not aware that this was a distinguishing attention which the Captain did not pay everybody, and which she owed partly to her connection with Mrs. Gray and partly to her solitary look, which had touched Captain Peleg’s benevolent heart. He had a girl of his own “over to Wickford,” who was about the same age; and it made him “kind of tender” toward other girls who didn’t seem to have any one to look after them. But the wind was fresh, and it was pleasant to be spoken to and noticed by some one on this, the first long journey of her short life; so she thankfully accepted the Captain’s invitation, and let him escort her along the deck, and assist her to mount the two steps which led into the wheel-house.

It was rather a pleasant-looking place in which she found herself. Three sides of the little enclosure were lined with windows, through which the green shores, which seemed to be rapidly drifting past them, could be seen. The fourth side was filled with a long cushioned bench. In the middle of the glassed front was the big brass wheel, shining with polish and friction, and revolving artistically in the hands of its steersman, who kept his eye fixed alternately on the water and on his compass. There seemed to be no regulation against speaking to this “man at the wheel,” or if there were, it was not strictly regarded; for two young ladies, who were already ensconced in one corner of the long seat, were plying him with all manner of questions.

They were rather pretty girls of that hard modern type which carries the air of knowing everything worth the knowing, having a right to everything worth the having, and being fully determined to claim that right to its fullest extent. As Candace entered, they favored her with one rapid, scrutinizing glance that took in every detail of her apparel, from the goat-skin boots which were too large for her feet to the round hat whose every bow bore witness to a country milliner, and after that they noticed her no more.

She, for her part, only too glad to be left unnoticed, looked shyly out of the corners of her eyes at them. They seemed to her inexpressibly stylish; for their tailor-made suits, though almost as plain as her own dress and jacket of blue alpaca, had that perfect fit and finish which makes the simplest dress seem all that can be desired. There was a knowing look to each little detail, from the slender silver bangles which appeared beneath the loose wrinkled wrists of their very long gloves to the tortoise-shell pins with which their hats were fastened to the tightly braided hair coiled low down on the nape of the neck. Candace’s hair fell in curls to her waist. She had always worn it so, and no one had ever thought anything about it; but now, all in a moment, she felt that it was wrong and improper.

“Been up to New York, Miss Joy?” said the Captain.

“No; only as far as the Junction, to meet a friend,” replied the prettier of the two girls. “Why weren’t you on the boat this morning, Captain?”