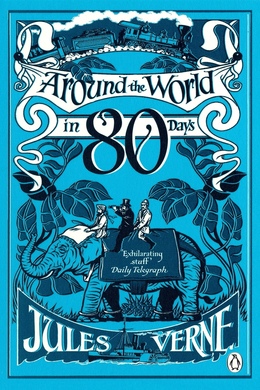 Around the World in 80 Days

Verne’s most outrageous “voyage extraordinaire” - a hasty world tour taken up on a gentlemen’s club wager! Mr. Phileas Fogg, master of precision, enters into the strangest wager ever made over the whist table - that he will circle the globe in 80 days. The news astounds Jean Passepartout, sometime wandering minstrel, bareback rider, funambulist, gymnast and fireman, now turned valet to Mr. Fogg in the expectancy of a quiet and well-regulated life. For the next 80 days, their lives are anything but quiet or well-regulated.Jules Verne preferred to call himself an author of “voyages extraordinaires.” An extraordinary voyage it is, from Fogg’s announcement to Passepartout that they are to “leave for Dover in ten minutes,” to his triumphant return to the Reform Club at the last second!

Mr. Phileas Fogg lived, in 1872, at No. 7, Saville Row, Burlington Gardens, the house in which Sheridan died in 1814. He was one of the most noticeable members of the Reform Club, though he seemed always to avoid attracting attention; an enigmatical personage, about whom little was known, except that he was a polished man of the world. People said that he resembled Byron–at least that his head was Byronic; but he was a bearded, tranquil Byron, who might live on a thousand years without growing old.

Certainly an Englishman, it was more doubtful whether Phileas Fogg was a Londoner. He was never seen on ‘Change, nor at the Bank, nor in the counting-rooms of the “City”; no ships ever came into London docks of which he was the owner; he had no public employment; he had never been entered at any of the Inns of Court, either at the Temple, or Lincoln’s Inn, or Gray’s Inn; nor had his voice ever resounded in the Court of Chancery, or in the Exchequer, or the Queen’s Bench, or the Ecclesiastical Courts. He certainly was not a manufacturer; nor was he a merchant or a gentleman farmer. His name was strange to the scientific and learned societies, and he never was known to take part in the sage deliberations of the Royal Institution or the London Institution, the Artisan’s Association, or the Institution of Arts and Sciences. He belonged, in fact, to none of the numerous societies which swarm in the English capital, from the Harmonic to that of the Entomologists, founded mainly for the purpose of abolishing pernicious insects.

Phileas Fogg was a member of the Reform, and that was all.

The way in which he got admission to this exclusive club was simple enough.

He was recommended by the Barings, with whom he had an open credit. His cheques were regularly paid at sight from his account current, which was always flush.

Was Phileas Fogg rich? Undoubtedly. But those who knew him best could not imagine how he had made his fortune, and Mr. Fogg was the last person to whom to apply for the information. He was not lavish, nor, on the contrary, avaricious; for, whenever he knew that money was needed for a noble, useful, or benevolent purpose, he supplied it quietly and sometimes anonymously. He was, in short, the least communicative of men. He talked very little, and seemed all the more mysterious for his taciturn manner. His daily habits were quite open to observation; but whatever he did was so exactly the same thing that he had always done before, that the wits of the curious were fairly puzzled.

Had he travelled? It was likely, for no one seemed to know the world more familiarly; there was no spot so secluded that he did not appear to have an intimate acquaintance with it. He often corrected, with a few clear words, the thousand conjectures advanced by members of the club as to lost and unheard-of travellers, pointing out the true probabilities, and seeming as if gifted with a sort of second sight, so often did events justify his predictions. He must have travelled everywhere, at least in the spirit.

It was at least certain that Phileas Fogg had not absented himself from London for many years. Those who were honoured by a better acquaintance with him than the rest, declared that nobody could pretend to have ever seen him anywhere else. His sole pastimes were reading the papers and playing whist. He often won at this game, which, as a silent one, harmonised with his nature; but his winnings never went into his purse, being reserved as a fund for his charities. Mr. Fogg played, not to win, but for the sake of playing. The game was in his eyes a contest, a struggle with a difficulty, yet a motionless, unwearying struggle, congenial to his tastes.

Phileas Fogg was not known to have either wife or children, which may happen to the most honest people; either relatives or near friends, which is certainly more unusual. He lived alone in his house in Saville Row, whither none penetrated. A single domestic sufficed to serve him. He breakfasted and dined at the club, at hours mathematically fixed, in the same room, at the same table, never taking his meals with other members, much less bringing a guest with him; and went home at exactly midnight, only to retire at once to bed. He never used the cosy chambers which the Reform provides for its favoured members. He passed ten hours out of the twenty-four in Saville Row, either in sleeping or making his toilet. When he chose to take a walk it was with a regular step in the entrance hall with its mosaic flooring, or in the circular gallery with its dome supported by twenty red porphyry Ionic columns, and illumined by blue painted windows.