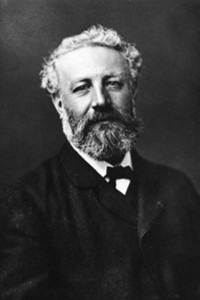 Jules Gabriel Verne was a French author who helped pioneer the science-fiction genre. He is best known for novels such as A Journey to the Centre of the Earth and Twenty Thousand Leagues Under the Sea. Verne is often referred to as the “Father of science fiction” as he wrote about space, air, and underwater travel before navigable aircraft and practical submarines were invented, and before any means of space travel had been devised.

In 1857 he met Pierre-Jules Hetzel, one of the most important French publishers of the 19th century. Hetzel’s advice improved Verne’s writings, which until then had been rejected by other publishers. Hetzel read a draft of Verne’s story about the balloon exploration of Africa, which had previously been rejected on the grounds that it was “too scientific”. With Hetzel’s help, he rewrote the story and in 1863 it was published in book form as Five Weeks in a Balloon (Cinq semaines en ballon). Acting on Hetzel’s advice, Verne added comical accents to his novels, changed sad endings into happy ones, and toned down various political messages.

From that point on, and for nearly a quarter of a century, scarcely a year passed in which Hetzel did not publish one or more of his stories. In 1888, he entered politics and was elected town councillor of Amiens where he championed several improvements and served for 15 years. In 1905, while ill with diabetes, Verne died at his home. (source: Wikipedia)

A mission to rid the seas of a monstrous creature becomes a terrifying nightmare when Professor Arronax, Conseil and Ned Land are thrown overboard. The ...read more »

Amalgamating futuristic technologies and expeditions into the future, this is a scintillating collection by Verne. This short work combines sights of th...read more »

A Floating City, enjoyed a popularity almost equal to that of Round the World in Eighty Days. It was the direct result of the trip which the author actu...read more »

As irascible scholar Professor Lidenbrock pores over a rare Icelandic tome, he discovers a scrap of parchment with cryptic writing tucked away between t...read more »

Both From the Earth to the Moon and All Around the Moon (‘Round the Moon) are available together, in a fully illustrated edition, here. NOTE: this Edwa...read more »

Written in response to Edgar Allan Poe’s novel The Narrative of Arthur Gordon Pym of Nantucket, this follows the adventures of the narrator and his jour...read more »

Jules Verne presents an amazing tale of adventure and courage of a fifteen year old boy Dick Sands. Being the only survivor of a whale hunt in the Pacif...read more »

Eight Hundred Leagues on the Amazon (1881)

This novel involves how Joam Garral, a ranch owner who lives near the Peruvian-Brazilian border on the Amazon River, is forced to travel down-stream whe...read more »

Like Vernes’ The Begum’s Millions, this has the theme of France and the entire world threatened by a super-weapon (what would now be called a weapon of ...read more »

The first Verne novel in which he perfected the “ingredients” of his later work, skilfully mixing a plot full of adventure and twists that hold the read...read more »

This is the legendary novel of technological speculation and social satire that launched an entire genre of adventure fiction: Verne’s From the Earth to...read more »

Godfrey Morgan of San Francisco, California will only consent to marry after he is allowed to cruise around the world. His uncle, William Holderkup, giv...read more »

A message in a bottle is found from Captain Grant of the HMS Britannia. The ship has sunk but Captain Grant is alive. Only he is being held hostage. The...read more »

In this 1876 “Mission Impossible” tale of intrigue set in Russia, a traitor has inspired the fierce Feofar Khan to invade Siberia and foment a rebellion...read more »

One of Jules Verne’s strangest and most controversial novels, Off on a Comet tells the story of a small band of people on a tiny world torn from earth b...read more »

At the Weldon Institute in Philadelphia, a mob of zealous balloon enthusiasts plans to conquer the sky in a state-of-the-art dirigible. When a stranger,...read more »

The Adventures of Captain Hatteras (1866)

First Mate Shandon receives a mysterious letter asking him to construct a reinforced steamship in Liverpool. As he heads out for Melville Bay and the Ar...read more »

The year is 1862 and the United States is engaged in a deadly civil war. President Lincoln has ordered the navy to blockade all Southern seaports. Neutr...read more »

With the restoration of Fritz Zermatt and his wife Jenny, his brother Frank and the other Castaways of the Flag to their anxious and sorely tried relati...read more »

In this chief of his works, Jules Verne has set himself to tell the story of all the most stirring adventures of which we have any written record - to g...read more »

Lt. Jasper Hobson and other members of the Hudson’s Bay Trading Co. and his team along with the company’s guests, Mrs. Paulina Barnett and Thomas Black ...read more »

Most of the marvels or impossibilities in here are to be found in the picture there presented to us of Scottish names, manners and costumes. It will har...read more »

It was seen first in North Carolina, or something was, smoking up from a mountain crater. With blinding speed, it roared past cars on a Pennsylvania roa...read more »

This [1877 Ward Lock] edition includes both From the Earth to the Moon and ‘Round the Moon, combined into one volume and without illustrations. A fully ...read more »

Based on the true story of Alexander Selkirk, who survived alone for almost five years on an uninhabited island off the coast of Chile, The Mysterious I...read more »

Claudius Bombarnac, a reporter is assigned by the Twentieth Century to cover the travels of the Grand Transasiatic Railway which runs between Uzun Ada, ...read more »

The Survivors of the Chancellor (1875)

Mr. Kazallon thought that booking passage on a cargo ship from Charleston to Liverpool would be a charming way to return to his English homeland. If onl...read more »

The Underground City, by Jules Verne, is a novel about the fortunes of a mining community called Aberfoyle which is near Stirling, Scotland. Miner James...read more »

Ticket No. “9672” is a fascinating tale of two women who live in a Norway Inn. Dame Hansen is a foolish woman whose mistakes must be dealt with by her d...read more »

Tribulations of a Chinaman in China (1879)

Kin-Fo, a well to do Chinese man living in Shang-Hai, is accused by his good friend Wang of not having had any discomforts in his life that would make h...read more »