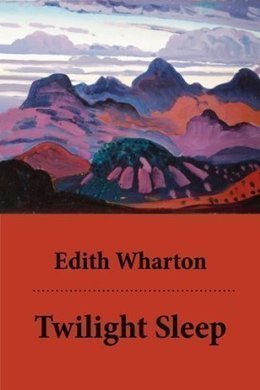 Edith Wharton’s superb satirical novel of the Jazz Age, a critically praised best-seller when it was first published. Sex, drugs, work, money, infatuation with the occult and spiritual healing – these are the remarkably modern themes that animate Twilight Sleep. The extended family of Mrs. Manford is determined to escape the pain, boredom and emptiness of life through whatever form of ‘twilight sleep’ they can devise or procure. And though the characters and their actions may seem more in keeping with today’s society, this is still a classic Wharton tale of the upper crust and its undoing – wittily, masterfully told.

Miss Bruss, the perfect secretary, received Nona Manford at the door of her mother’s boudoir (“the office,” Mrs. Manford’s children called it) with a gesture of the kindliest denial.

“She wants to, you know, dear–your mother always WANTS to see you,” pleaded Maisie Bruss, in a voice which seemed to be thinned and sharpened by continuous telephoning. Miss Bruss, attached to Mrs. Manford’s service since shortly after the latter’s second marriage, had known Nona from her childhood, and was privileged, even now that she was “out,” to treat her with a certain benevolent familiarity–benevolence being the note of the Manford household.

“The manicure is there now, late as usual. That’s what martyrizes your mother; everybody’s being so unpunctual. This New York life is killing her.”

“I’m not unpunctual,” said Nona Manford, leaning in the doorway.

“No; and a miracle, too! The way you girls keep up your dancing all night. You and Lita–what times you two do have!” Miss Bruss was becoming almost maternal. “But just run your eye down that list–. You see your mother didn’t EXPECT to see you before lunch; now did she?”

Nona shook her head. “No; but you might perhaps squeeze me in.”

It was said in a friendly, a reasonable tone; on both sides the matter was being examined with an evident desire for impartiality and good-will. Nona was used to her mother’s engagements; used to being squeezed in between faith-healers, art-dealers, social service workers and manicures. When Mrs. Manford did see her children she was perfect to them; but in this killing New York life, with its ever-multiplying duties and responsibilities, if her family had been allowed to tumble in at all hours and devour her time, her nervous system simply couldn’t have stood it–and how many duties would have been left undone!

Mrs. Manford’s motto had always been: “There’s a time for everything.” But there were moments when this optimistic view failed her, and she began to think there wasn’t. This morning, for instance, as Miss Bruss pointed out, she had had to tell the new French sculptor who had been all the rage in New York for the last month that she wouldn’t be able to sit to him for more than fifteen minutes, on account of the Birth Control committee meeting at 11.30 at Mrs.–

Nona seldom assisted at these meetings, her own time being–through force of habit rather than real inclination–so fully taken up with exercise, athletics and the ceaseless rush from thrill to thrill which was supposed to be the happy privilege of youth. But she had had glimpses enough of the scene: of the audience of bright elderly women, with snowy hair, eurythmic movements, and finely-wrinkled over-massaged faces on which a smile of glassy benevolence sat like their rimless pince-nez. They were all inexorably earnest, aimlessly kind and fathomlessly pure; and all rather too well- dressed, except the “prominent woman” of the occasion, who usually wore dowdy clothes, and had steel-rimmed spectacles and straggling wisps of hair. Whatever the question dealt with, these ladies always seemed to be the same, and always advocated with equal zeal Birth Control and unlimited maternity, free love or the return to the traditions of the American home; and neither they nor Mrs. Manford seemed aware that there was anything contradictory in these doctrines. All they knew was that they were determined to force certain persons to do things that those persons preferred not to do. Nona, glancing down the serried list, recalled a saying of her mother’s former husband, Arthur Wyant: “Your mother and her friends would like to teach the whole world how to say its prayers and brush its teeth.”