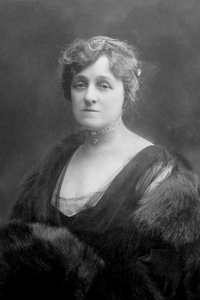 Many of Wharton’s novels are characterised by a subtle use of dramatic irony. Having grown up in upper-class pre-World War I society, Wharton became one of its most astute critics. In such works as The House of Mirth and The Age of Innocence she employed both humour and profound empathy to describe the lives of New York’s upper-class and the vanishing of their world in the early years of the 20th century. In contrast, she used a harsher tone in her novel Ethan Frome to convey the atmosphere of lower-class rural Massachusetts. In addition to writing several respected novels, Wharton produced a wealth of short stories and is particularly well regarded for her ghost stories.

Edith Wharton, the first woman to win the Pulitzer Prize, vividly reflects on her public and private life in this stunning memoir. With richness and del...read more »

A collection of six short stories. The book starts with Atrophy, a neat study of near desperation in tight social surroundings as Nora Frenway bravely s...read more »

Set against the bleak winter landscape of New England, Ethan Frome is the story of a poor farmer, lonely and downtrodden, his wife Zeena, and her cousin...read more »

As nuanced in her observations of human behavior as she is in her vivid depictions of French landscape and architecture, Wharton fully exploited her uni...read more »

Here and Beyond is a collection of six short stories, which includes ghost stories, social dramas and character studies set in Brittany, New England, an...read more »

Born in 1862 into an exclusive New York society – against whose rigid mores she often rebelled – Edith Wharton bridged the literary worlds of two contin...read more »

Summer, Edith Wharton wrote to Gaillard Lapsley, “is known to its author and her familars as the Hot Ethan.” One of the first American novels to deal fr...read more »

Somewhere in this book, Wharton observes that clever liars always come up with good stories to back up their fabrications, but that really clever liars ...read more »

A bestseller when it was first published, The Children is a comic, bittersweet novel about the misadventures of a bachelor and a band of precocious chil...read more »

Edith Wharton’s satiric anatomy of American society in the first decade of the twentieth century appeared in 1913; it both appalled and fascinated its f...read more »

Set in the Berkshires of western Massachusetts during the height of the progressive era, the book centers on heroine Justine Brent, a professionally tra...read more »

Halo Tarrant, abandoning her failed marriage, elopes to Europe with the brilliant young writer, Vance Weston. As they travel around, her only wish is to...read more »

Opening on the French Riviera among a motley community of American expatriates, The Mother’s Recompense tells the story of Kate Clephane and her relucta...read more »

Set in and around London, The Reef is a story of complex morality and its intricately woven place in society. This narrative primarily follows George Da...read more »

The Touchstone was Edith Wharton’s first published novella, and it’s spare, perhaps even underwritten. Even so, this Faustian tale of a man who stoops t...read more »

This two part romance chronicles the rise to power of Odo Valsecca during the intellectual and political tumult which preceded the French Revolution. Du...read more »

Showcasing the talent of one of the greatest novelists of the late 19th and early 20th centuries, this collection gathers five of Edith Wharton’s short ...read more »