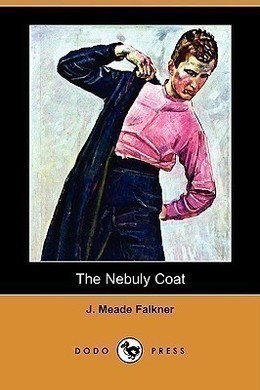 Set in the mid-nineteenth century, The Nebuly Coat is the story of a young architect, Edward Westray, who is sent to the remote Dorset town of Cullerne to oversee restoration work on crumbling Cullerne Minster. As he becomes caught up in the lives of the townspeople, he hears rumours about a disputed claim to the title of Lord Blandamer, whose coat of arms in the Minster’s great transept window is the ‘nebuly coat’ of the title. When the new Lord Blandamer arrives, promising to pay all the costs of the restoration, Westray’s suspicions are aroused. Plagued by fears and premonitions of the imminent collapse of the Minster tower, and shaken by the sudden violent death of Sharnall, the organist, Westray is drawn ever deeper into danger as the secrets behind the ‘sea-green and silver’ nebuly coat unravel…

Cullerne Wharf of the Ordnance maps, or plain Cullerne as known to the countryside, lies two miles from the coast to-day; but it was once much nearer, and figures in history as a seaport of repute, having sent six ships to fight the Armada, and four to withstand the Dutch a century later. But in fulness of time the estuary of the Cull silted up, and a bar formed at the harbour mouth; so that sea-borne commerce was driven to seek other havens. Then the Cull narrowed its channel, and instead of spreading itself out prodigally as heretofore on this side or on that, shrunk to the limits of a well-ordered stream, and this none of the greatest. The burghers, seeing that their livelihood in the port was gone, reflected that they might yet save something by reclaiming the salt-marshes, and built a stone dyke to keep the sea from getting in, with a sluice in the midst of it to let the Cull out. Thus were formed the low-lying meadows called Cullerne Flat, where the Freemen have a right to pasture sheep, and where as good-tasting mutton is bred as on any pre-sale on the other side of the Channel. But the sea has not given up its rights without a struggle, for with a south-east wind and spring-tide the waves beat sometimes over the top of the dyke; and sometimes the Cull forgets its good behaviour, and after heavy rainfalls inland breaks all bonds, as in the days of yore. Then anyone looking out from upper windows in Cullerne town would think the little place had moved back once more to the seaboard; for the meadows are under water, and the line of the dyke is scarcely broad enough to make a division in the view, between the inland lake and the open sea beyond.

The main line of the Great Southern Railway passes seven miles to the north of this derelict port, and converse with the outer world was kept up for many years by carriers’ carts, which journeyed to and fro between the town and the wayside station of Cullerne Road. But by-and-by deputations of the Corporation of Cullerne, properly introduced by Sir Joseph Carew, the talented and widely-respected member for that ancient borough, persuaded the railway company that better communication was needed, and a branch-line was made, on which the service was scarcely less primitive than that of the carriers in the past.

The novelty of the railway had not altogether worn off at the time when the restorations of the church were entrusted to Messrs. Farquhar and Farquhar; and the arrival of the trains was still attended by Cullerne loungers as a daily ceremonial. But the afternoon on which Westray came, was so very wet that there were no spectators. He had taken a third-class ticket from London to Cullerne Road to spare his pocket, and a first-class ticket from the junction to Cullerne to support the dignity of his firm. But this forethought was wasted, for, except certain broken-down railway officials, who were drafted to Cullerne as to an asylum, there were no witnesses of his advent.

He was glad to learn that the enterprise of the Blandamer Arms led that family and commercial hotel to send an omnibus to meet all trains, and he availed himself the more willingly of this conveyance because he found that it would set him down at the very door of the church itself. So he put himself and his modest luggage inside–and there was ample room to do this, for he was the only passenger–plunged his feet into the straw which covered the floor, and endured for ten minutes such a shaking and rattling as only an omnibus moving over cobble-stones can produce.

With the plans of Cullerne Minster Mr Westray was thoroughly familiar, but the reality was as yet unknown to him; and when the omnibus lumbered into the market-place, he could not suppress an exclamation as he first caught sight of the great church of Saint Sepulchre shutting in the whole south side of the square. The drenching rain had cleared the streets of passengers, and save for some peeping-Toms who looked over the low green blinds as the omnibus passed, the place might indeed have been waiting for Lady Godiva’s progress, all was so deserted.

The heavy sheets of rain in the air, the misty water-dust raised by the drops as they struck the roofs, and the vapour steaming from the earth, drew over everything a veil invisible yet visible, which softened outlines like the gauze curtain in a theatre. Through it loomed the Minster, larger and far more mysteriously impressive than Westray had in any moods imagined. A moment later the omnibus drew up before an iron gate, from which a flagged pathway led through the churchyard to the north porch.

The conductor opened the carriage-door.

“This is the church, sir,” he said, somewhat superfluously. “If you get out here, I will drive your bag to the hotel.”