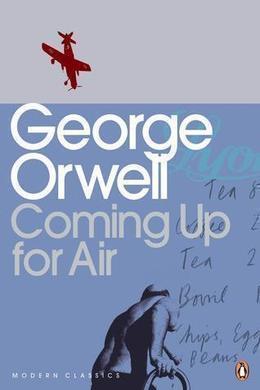 Coming Up For Air

George Bowling, the hero of this comic novel, is a middle-aged insurance salesman who lives in an average English suburban row house with a wife and two children. One day, after winning some money from a bet, he goes back to the village where he grew up, to fish for carp in a pool he remembers from thirty years before. The pool, alas, is gone, the village has changed beyond recognition, and the principal event of his holiday is an accidental bombing by the RAF.

The idea really came to me the day I got my new false teeth.

I remember the morning well. At about a quarter to eight I’d nipped out of bed and got into the bathroom just in time to shut the kids out. It was a beastly January morning, with a dirty yellowish-grey sky. Down below, out of the little square of bathroom window, I could see the ten yards by five of grass, with a privet hedge round it and a bare patch in the middle, that we call the back garden. There’s the same back garden, some privets, and same grass, behind every house in Ellesmere Road. Only difference– where there are no kids there’s no bare patch in the middle.

I was trying to shave with a bluntish razor-blade while the water ran into the bath. My face looked back at me out of the mirror, and underneath, in a tumbler of water on the little shelf over the washbasin, the teeth that belonged in the face. It was the temporary set that Warner, my dentist, had given me to wear while the new ones were being made. I haven’t such a bad face, really. It’s one of those bricky-red faces that go with butter-coloured hair and pale-blue eyes. I’ve never gone grey or bald, thank God, and when I’ve got my teeth in I probably don’t look my age, which is forty-five.

Making a mental note to buy razor-blades, I got into the bath and started soaping. I soaped my arms (I’ve got those kind of pudgy arms that are freckled up to the elbow) and then took the back- brush and soaped my shoulder-blades, which in the ordinary way I can’t reach. It’s a nuisance, but there are several parts of my body that I can’t reach nowadays. The truth is that I’m inclined to be a little bit on the fat side. I don’t mean that I’m like something in a sideshow at a fair. My weight isn’t much over fourteen stone, and last time I measured round my waist it was either forty-eight or forty-nine, I forget which. And I’m not what they call ‘disgustingly’ fat, I haven’t got one of those bellies that sag half-way down to the knees. It’s merely that I’m a little bit broad in the beam, with a tendency to be barrel-shaped. Do you know the active, hearty kind of fat man, the athletic bouncing type that’s nicknamed Fatty or Tubby and is always the life and soul of the party? I’m that type. ‘Fatty’ they mostly call me. Fatty Bowling. George Bowling is my real name.

But at that moment I didn’t feel like the life and soul of the party. And it struck me that nowadays I nearly always do have a morose kind of feeling in the early mornings, although I sleep well and my digestion’s good. I knew what it was, of course–it was those bloody false teeth. The things were magnified by the water in the tumbler, and they were grinning at me like the teeth in a skull. It gives you a rotten feeling to have your gums meet, a sort of pinched-up, withered feeling like when you’ve bitten into a sour apple. Besides, say what you will, false teeth are a landmark. When your last natural tooth goes, the time when you can kid yourself that you’re a Hollywood sheik, is definitely at an end. And I was fat as well as forty-five. As I stood up to soap my crutch I had a look at my figure. It’s all rot about fat men being unable to see their feet, but it’s a fact that when I stand upright I can only see the front halves of mine. No woman, I thought as I worked the soap round my belly, will ever look twice at me again, unless she’s paid to. Not that at that moment I particularly wanted any woman to look twice at me.