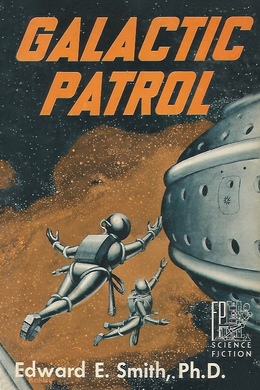 The space-pirates of Boskone raided at will, menacing the whole structure of interstellar civilization. Master-minded by a super-scientist, their conquering fleets outgunned even the mighty space cruisers of the Galactic Patrol. When Lensman Kim Kinnison of the Patrol discovered the secret Boskonian base, it was invulnerable to outside attack. But where a battle-fleet would meet insuperable resistance, a single infiltrator might penetrate the Boskonian defenses - if he had the guts to take on million-to-one odds. Kinnison had guts enough to take on the odds - even with the future of the civilized Universe riding on his shoulders.

Dominating twice a hundred square miles of campus, parade-ground, airport, and space-port, a ninety-story edifice of chromium and glass sparkled dazzlingly in the bright sunlight of a June morning. This monumental pile was Wentworth Hall, in which the Tellurian candidates for the Lens of the Galactic Patrol live and move and have their being. One wing of its topmost floor seethed with tense activity, for that wing was the habitat of the lordly Five-Year Men, this was Graduation Day, and in a few minutes Class Five was due to report in Room A.

Room A, the private office of the Commandant himself; the dreadful lair into which an undergraduate was summoned only to disappear from the Hall and from the Cadet Corps; the portentous chamber into which each year the handful of graduates marched and from which they emerged, each man in some subtle fashion changed.

In their cubicles of steel the graduates scanned each other narrowly, making sure that no wrinkle or speck of dust marred the space-black and silver perfection of the dress uniform of the Patrol; that not even the tiniest spot of tarnish or dullness violated the glittering golden meteors upon their collars or the resplendently polished ray-pistols and other equipment at their belts. The microscopic mutual inspection over, the kit-boxes were snapped shut and racked, and the embryonic Lensmen made their way out into the assembly hall.

In the wardroom Kimball Kinnison, Captain of the Class by virtue of graduating at its head, and his three lieutenants, Clifford Maitland, Raoul LaForge, and Widel Holmberg, had inspected each other minutely and were now simply awaiting, in ever-increasing tension, the zero minute.

“Now, fellows, remember that drop!” the young Captain jerked out. “We’re dropping the shaft free, at higher velocity and in tighter formation than any class ever tried before. If anybody hashes the formation–our last show and with the whole Corps looking on….”

“Don’t worry about the drop, Kim,” advised Maitland. “All three platoons will take that like clockwork. What’s got me all of a dither is what is really going to happen in Room A.”

“Uh-_huh_!” exclaimed LaForge and Holmberg as one, and:

“You can play that across the board for the whole Class,” Kinnison agreed. “Well, we’ll soon know–it’s time to get going,” and the four officers stepped out into the assembly hall; the Class springing to attention at their approach.

Kinnison, now all brisk Captain, stared along the mathematically exact lines and snapped:

“Class Five present in full, sir!” The sergeant-major touched a stud at his belt and all vast Wentworth Hall fairly trembled under the impact of an all-pervading, lilting, throbbing melody as the world’s finest military band crashed into “Our Patrol.”

“Squads left–March!” Although no possible human voice could have been heard in that gale of soul-stirring sound and although Kinnison’s lips scarcely moved, his command was carried to the very bones of those for whom it was intended–and to no one else–by the tight-beam ultra-communicators strapped upon their chests. “Close formation–forward–March!”

In perfect alignment and cadence the little column marched down the hall. In their path yawned the shaft–a vertical pit some twenty feet square extending from main floor to roof of the Hall; more than a thousand sheer feet of unobstructed air, cleared now of all traffic by flaring red lights. Five left heels clicked sharply, simultaneously upon the lip of the stupendous abyss. Five right legs swept out into emptiness. Five right hands snapped to belts and five bodies, rigidly erect, arrowed downward at such an appalling velocity that to unpractised vision they simply vanished.

Six-tenths of a second later, precisely upon a beat of the stirring march, those ten heels struck the main floor of Wentworth Hall, but not with a click. Dropping with a velocity of almost two thousand feet per second though they were at the instant of impact, yet those five husky bodies came from full speed to an instantaneous, shockless, effortless halt at contact, for the drop had been made under complete neutralization of inertia–“free,” in space parlance. Inertia restored, the march was resumed–or rather continued–in perfect time with the band. Five left feet swung out, and as the right toes left the floor the second rank, with only bare inches to spare, plunged down into the space its predecessor had occupied a moment before.

Rank after rank landed and marched away with machine-like precision. The dread door of Room A opened automatically at the approach of the cadets and closed behind them.