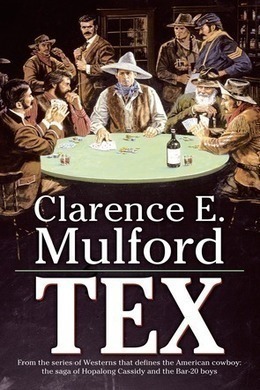 Tex Ewalt was educated before he came west and can quote Shakespeare, philosophy, and the Bible, which spices up his conversation some. He’s gotten restless again and hopes to hook up with Hopalong Cassidy and Red Connors. He takes the train south to the mining town of Windsor, Kansas, and decides to stay a while and make some money playing poker. Windsor, though, is run by Gus Williams, an old enemy. The chaos that ensues leads to a fight between the miners and the railroad-and more than one gunfight.

Memory’s curtain rises and shows a scene softened by time and blurred by forgetfulness, yet the details slowly emerge like the stars at twilight. There appears a rain-washed, wind-swept range in Montana, a great pasture level in the center, but rising on its sides like a vast, shallow saucer, with here and there a crack of more somber hue where a ravine, or sluggish stream, lead toward the distant river. Green underfoot, deep blue overhead, with a lavender and purple rim under a horizon made ragged and sharp by the not too distant mountains and foothills. An occasional deep blue gash in the rim’s darker tones marks where some pass or canyon cuts through the encircling barriers. A closer inspection would reveal a half-dozen earthy hollows, the rutting holes of the once numerous buffalo which paused here on their periodic migrations. In the foreground a white ranchhouse and its flanking red buildings, framed by the gray of corral walls, nestles on the southern slope of a rise and basks in the sunlight. From it three faint trails grow more and more divergent, leading off to Everywhere. Scattered over the vast, green pastures are the grazing units of a great herd, placid and content, moving slowly and jerkily, like spilled water down a gentle, dusty slope. But in the total movement there is one thread with definite directness, even though it constantly turns from side to side in avoiding the grazing cattle. This, as being different and indicating purpose, takes our instant attention.

A rider slowly makes his way among the cattle, by force of habit observing everything without being fully conscious of it. His chaps of soft leather, worn more because of earlier associations than from any urgent need on this northern range, have the look of long service and the comfort coming from such. His hat is a dark gray sombrero, worn in a manner suggesting a cavalier of old. Over an open vest are the careless folds of a blue kerchief, and at his right hip rubs a holster with its waiting, deadly tenant. A nearer approach reveals him to be a man in middle life, lean, scrupulously neat, clean shaven, with lines of deep humor graven about his eyes and mouth, softening a habitual expression which otherwise would have been forbiddingly hard and cynical.

His roving glances reach the purple horizon and are arrested by the cerulean blue of a pass, and he checks his horse with a gesture hopelessly inadequate to express the restlessness, the annoying uncertainty of his mood, a mood fed unceasingly by an inborn yearning to wander, regardless of any aim or other condition. Here is a prospect about him which he knows cannot be improved upon; here are duties light enough practically to make him master of his time, yet heavy enough to be purposeful; his days are spent in the soothing solitudes of clean, refreshing surroundings; his evenings with men who give him perfect fellowship, wordless respect, and repressed friendship, speaking when the mood urges, or silent in that rare, all-explaining silence of strong men in perfect accord. His wants are few and automatically supplied: yet for weeks the longing to leave it all daily had grown stronger–to leave it for what? Certainly for worse; yet leave it he must.

He sat and pondered, retrospective, critical. The activities of his earlier days passed before him, with no hypocritical hiding or blunting of motives. They revealed few redeeming features, for he carelessly had followed the easy trails through the deceptive lowlands of morality, and among men and women worse even than himself in overt acts and shameless planning, yet better because they did not have his intelligence or moral standards. But he slowly rose above them as a diver rises above treacherous, lower currents, and the reason was plain to those who knew him well. First he had a courage sparkling like a jewel, unhesitant, forthright, precipitate; next he had a rare mixture of humor and cynicism which better revealed to him things in their right proportions and values; and last, but hardly least by any means, an intelligence of high order, buttressed by facts, clarified by systematic study, and edged by training. In his youth he had aimed at the practice of medicine, but gave too much attention to more imaginative targets and found, when too late, that he had hit nothing. His fondness for drinking, gambling at cards, and other weedy sowings resulted from, rather than caused, the poor aim. Certain unforgivable episodes, unforgivable because of their notoriety more than because of the things themselves, brewed a paternal tempest, upon which he had turned a scornful back, followed Horace Greeley’s famous advice, and sought the healing and the sanctuary of the unasking West.