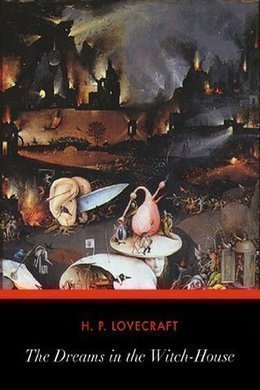 The Dreams In The Witch House

The story follows Walter Gilman, who takes a room in the Witch House, an accursed house in Akham, Lovecraft’s fictional New England town. The house once harbored Keziah Mason, an witch who disappeared mysteriously from a Salem jail in 1692. Gilman discovers that over the centuries most of its occupants have died prematurely. In his dreams while at the house, Gilman travels to the city of Elder Things and communes with the evil witch and her henchmen.

Whether the dreams brought on the fever or the fever brought on the dreams Walter Gilman did not know. Behind everything crouched the brooding, festering horror of the ancient town, and of the moldy, unhallowed garret gable where he wrote and studied and wrestled with figures and formulae when he was not tossing on the meager iron bed. His ears were growing sensitive to a preternatural and intolerable degree, and he had long ago stopped the cheap mantel clock whose ticking had come to seem like a thunder of artillery. At night the subtle stirring of the black city outside, the sinister scurrying of rats in the wormy partitions, and the creaking of hidden timbers in the centuried house, were enough to give him a sense of strident pandemonium. The darkness always teemed with unexplained sound—and yet he sometimes shook with fear lest the noises he heard should subside and allow him to hear certain other fainter noises which he suspected were lurking behind them.

He was in the changeless, legend-haunted city of Arkham, with its clustering gambrel roofs that sway and sag over attics where witches hid from the King’s men in the dark, olden years of the Province. Nor was any spot in that city more steeped in macabre memory than the gable room which harbored him —for it was this house and this room which had likewise harbored old Keziah Mason, whose flight from Salem Jail at the last no one was ever able to explain. That was in 1692—the jailer had gone mad and babbled of a small white-fanged furry thing which scuttled out of Keziah’s cell, and not even Cotton Mather could explain the curves and angles smeared on the grey stone walls with some red, sticky fluid.

Possibly Gilman ought not to have studied so hard. Non-Euclidean calculus and quantum physics are enough to stretch any brain, and when one mixes them with folklore, and tries to trace a strange background of multi-dimensional reality behind the ghoulish hints of the Gothic tales and the wild whispers of the chimney-corner, one can hardly expect to be wholly free from mental tension. Gilman came from Haverhill, but it was only after he had entered college in Arkham that he began to connect his mathematics with the fantastic legends of elder magic. Something in the air of the hoary town worked obscurely on his imagination. The professors at Miskatonic had urged him to slacken up, and had voluntarily cut down his course at several points. Moreover, they had stopped him from consulting the dubious old books on forbidden secrets that were kept under lock and key in a vault at the university library. But all these precautions came late in the day, so that Gilman had some terrible hints from the dreaded Necronomicon of Abdul Alhazred, the fragmentary Book of Eibon, and the suppressed Von unaussprechlichen Kulten of von Junzt to correlate with his abstract formulae on the properties of space and the linkage of dimensions known and unknown.

He knew his room was in the old Witch-House—that, indeed, was why he had taken it. There was much in the Essex County records about Keziah Mason’s trial, and what she had admitted under pressure to the Court of Oyer and Terminer had fascinated Gilman beyond all reason. She had told Judge Hathorne of lines and curves that could be made to point out directions leading through the walls of space to other spaces beyond, and had implied that such lines and curves were frequently used at certain midnight meetings in the dark valley of the white stone beyond Meadow Hill and on the unpeopled island in the river. She had spoken also of the Black Man, of her oath, and of her new secret name of Nahab. Then she had drawn those devices on the walls of her cell and vanished.

Gilman believed strange things about Keziah, and had felt a queer thrill on learning that her dwelling was still standing after more than two hundred and thirty-five years. When he heard the hushed Arkham whispers about Keziah’s persistent presence in the old house and the narrow streets, about the irregular human tooth-marks left on certain sleepers in that and other houses, about the childish cries heard near May-Eve, and Hallowmass, about the stench often noted in the old house’s attic just after those dreaded seasons, and about the small, furry, sharp-toothed thing which haunted the mouldering structure and the town and nuzzled people curiously in the black hours before dawn, he resolved to live in the place at any cost. A room was easy to secure, for the house was unpopular, hard to rent, and long given over to cheap lodgings. Gilman could not have told what he expected to find there, but he knew he wanted to be in the building where some circumstance had more or less suddenly given a mediocre old woman of the Seventeenth Century an insight into mathematical depths perhaps beyond the utmost modern delvings of Planck, Heisenberg, Einstein, and de Sitter.