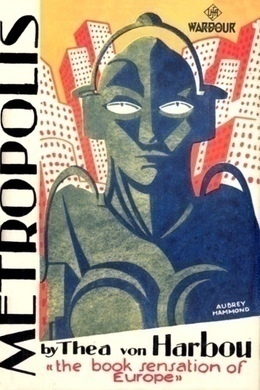 This is Metropolis, the novel that the film’s screenwriter – Thea von Harbou, who was director Fritz Lang’s wife, and a collaborator in the creation of the film – this is the novel that Harbou wrote from her own notes. It contains bits of the story that got lost on the cutting-room floor; in a very real way it is the only way to understand the film.

Now the rumbling of the great organ swelled to a roar, pressing, like a rising giant, against the vaulted ceiling, to burst through it.

Freder bent his head backwards, his wide-open, burning eyes stared unseeingly upward. His hands formed music from the chaos of the notes; struggling with the vibration of the sound and stirring him to his innermost depths.

He was never so near tears in his life and, blissfully helpless, he yielded himself up to the glowing moisture which dazzled him.

Above him, the vault of heaven in lapis lazuli; hovering therein, the twelve-fold mystery, the Signs of the Zodiac in gold. Set higher above them, the seven crowned ones: the planets. High above all a silver- shining bevy of stars: the universe.

Before the bedewed eyes of the organ-player, to his music, the stars of heavens began the solemn mighty dance.

The breakers of the notes dissolved the room into nothing. The organ, which Freder played, stood in the middle of the sea.

It was a reef upon which the waves foamed. Carrying crests of froth, they dashed violently onward, and the seventh was always the mightiest.

But high above the sea, which bellowed in the uproar of the waves, the stars of heaven danced the solemn, mighty dance.

Shaken to her core, the old earth started from her sleep. Her torrents dried up; her mountains fell to ruin. From the ripped open depths the fire welled up; The earth burnt with all she bore. The waves of the sea became waves of fire. The organ flared up, a roaring torch of music. The earth, the sea and the hymn-blazing organ crashed in and became ashes.

But high above the deserts and the spaces, to which creation was burnt, the stars of heaven danced the solemn mighty dance.

Then, from the grey, scattered ashes, on trembling wings unspeakably beautiful and solitary, rose a bird with jewelled feathers. It uttered a mournful cry. No bird which ever lived could have mourned so agonisingly.

Then, from the solemn mighty dance of the stars, one freed itself and neared the dead earth. Its light was gentler than moonlight and more imperious than the fight of the sun. Among the music of the spheres it was the most heavenly note. It enveloped the mourning bird in its dear light; it was as strong as a deity, crying: “To me…to me!”

Then the jewelled bird left the grave of the sea and earth and gave its sinking wings up to the powerful voice which bore it. Moving in a cradle of light, it swept upwards and sang, becoming a note of the spheres, vanishing into Eternity…

Freder let his fingers slip from the keys. He bent forward and buried his face in his hands. He pressed his eyes until he saw the fiery dance of the stars behind his eyelids. Nothing could help him– nothing. Everywhere, everywhere, in an agonising, blissful omnipresence, stood, in his vision, the one one countenance.

The austere countenance of the virgin, the sweet countenance of the mother–the agony and the desire with which he called and called for the one single vision for which his racked heart had not even a name, except the one, eternal, you…you…you!

He let his hands sink and raised his eyes to the heights of the beautifully vaulted room, in which his organ stood. From the sea-deep blue of the heavens, from the flawless gold of the heavenly bodies, from the mysterious twilight around him, the girl looked at him with the deadly severity of purity, quite maid and mistress, inviolability, graciousness itself, her beautiful brow in the diadem of goodness, her voice, pity, every word a song. Then to turn, and to go, and to vanish–no more to be found. Nowhere, nowhere.

“You–!” cried the man. The captive note struck against the walls, finding no way out.

Now the loneliness was no longer bearable. Freder stood up and opened the windows. The works lay, in quivering brightness, before him. He pressed his eyes closed, standing still, hardly breathing. He felt the proximity of the servants, standing silently, waiting for the command which would permit them to come to life.

There was one among them–Slim, with his courteous face, the expression of which never changed–Freder knew of him: one word to him, and, if the girl still walked on earth with her silent step, then Slim would find her. But one does not set a blood-hound on the track of a sacred, white hind, if one does not want to be cursed, and to be, all’ his life long, a miserable, miserable man.