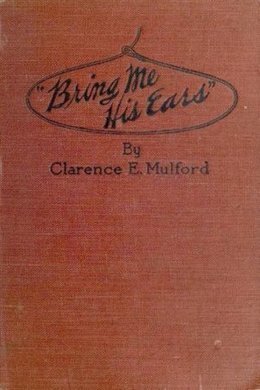 Bring Me His Ears

Early 1840’s and the West is opening up. Wagon trains are headed to the Oregon Territories and Texas is still an independent republic. Tom Boyd is pushed into a Santa Fe street by the Mexican governor of New Mexico. Boyd slaps the man’s face and runs for his life. Agents are sent after Boyd with one order - “Bring him back alive or bring me his ears!” Boyd decides Oregon is much safer than New Mexico, until a chance meeting with a young woman changes his destiny…

The tall, lanky Missourian leaning against the corner of a ramshackle saloon on Locust Street, St. Louis, Missouri–the St. Louis of the early forties–turned his whiskey-marked face toward his companion, a short and slender Mexican trader, sullenly listening to the latter’s torrent of words, which was accompanied by many and excitable gesticulations. The Missourian shook his head in reply to the accusations of his companion.

“But he was on thee boat weeth us!” exclaimed the other. “An’ you lose heem–lak theese!” the sharp snap of his fingers denoted magic.

“Thar ain’t no use o’ gittin’ riled,” replied Schoolcraft. “How in tarnation kin a man keep th’ trail o’ a slippery critter like him in these yere crowds? I’ll git sight o’ him, right yere.”

“That ees w’at you say,” rejoined the Mexican, shrugging his shoulders. “But w’at weel I say to le Gobernador? Theese hombre Tomaz Boyd–he know vera many t’eengs–too vera many t’eengs–an’ he ensult le Gobernador. Madre de Dios–sooch ensult!” He shivered at the thought. “W’en I get thee message, I tr-remble! It say ‘Br-ring heem to me–or breeng me his ears!’ I am tol’ to go to Señor Schoolcr-raft at Eendependence–he ees thee man. I go; an’ then you lose heem! Bah! You do not know theese Manuel Armijo, le Gobernador de Santa Fe, my fren’–I tr-remble!”

“You need a good swig, that’s what you need,” growled Schoolcraft. “An’ if ye warn’t a chuckle-head,” he said with a flash of anger, “we wouldn’t ‘a’ come yere at all; I told ye he’s got th’ prairie fever an’ shore would come back to Independence, whar I got friends; but no–we had ter foller him!” He spat emphatically. “Thar warn’t no sense to it, nohow!”

“Now you look a-here, Pedro,” growled the Missourian, his sullen gaze passing up and down the slender Mexican. “Ye don’t want ter use no spurs on this critter. I ain’t no greaser! If ye’ll hold them arms still fer a minute I’ll tell ye somethin’. Thar’s three ways o’ gittin’ a deer: one is trailin’–which we’ve found ain’t no good; another is layin’ low near a runway–which is yer job; th’ third is watchin’ th’ salt lick–which is my job. You go down ter th’ levee, git cached among them piles o’ freight an’ keep a lookout on th’ landin’ stage o’ th’ Belle. I’ll stick right yere on this corner an’ watch th’ lick, which is Hawkens’ gun store. He lost his pistol overboard, comin’ down th’ river, didn’t he? An’ th’ Belle ain’t sailin’ till arter ten o’clock, is she? One o’ us is bound ter git sight o’ him, fer he’ll shore go back by th’ river; an’ if thar’s any place in this town whar a plainsman’ll go, it’s that gun store, down th’ street. You do what I say, or you an’ Armijo kin go plumb ter hell! An’ don’t ye wave yer fists under my nose no more, Pedro; I might misunderstand ye.”

The Mexican’s face brightened. “Eet ees good, vera good, Señor Schoolcraft. Hah! You have thee br-rains, my fren’. Armijo, he say: ‘Pedro, get heem to Santa Fe, if you can. If you can’t, then keel heem, an’ breeng me hees ears.’ Bueno! I go, señor. I go pronto. Buena dia!”

“Then git,” growled Schoolcraft. “Thar’s that long-faced clerk o’ Hawkens’ openin’ th’ shop. Now remember: this side o’ th’ junction o’ th’ Oregon trail I’m only ter watch him. If he goes southwest from th’ junction, yer job begins; if he heads up fer th’ Platte, my job starts. I ain’t got no love fer him, but I’m hopin’ he heads fer Oregon an’ gets killed quick! I hate ter think o’ a white man in Armijo’s paws. An’ if he hangs ‘round th’ settlements, we toss up fer th’ job. If that’s right, vamoose.”

“Eet ees r-right to thee vera letter,” whispered the Mexican, rubbing his hands. “Eef only I can get heem to Santa Fe–ah, my fren’!”

“Yer wuss nor a weasel,” grunted the Missourian, slight prickles playing up and down his spine. “Better git down to them freight piles!”

Schoolcraft watched his scurrying friend until he slipped around a corner and was lost to sight; then he turned and looked up the street at the gun shop of Jake and Samuel Hawken, whose weapons were renowned all over that far-stretching western wilderness. Shrugging his shoulders, he glanced in disgust at the heavy, patented repeating rifle in his hand and, letting his personal affairs take precedence over those of the distant Mexican tyrant, he swung down the street, crossed it, and entered the famous gun shop. He risked nothing by the move, for the store was the Mecca of frontiersmen, and a trip to St. Louis was hardly complete without a visit to the shop.