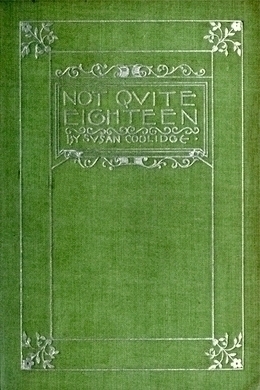 Susan Coolidge has always possessed the affection of her young readers, for it seems as if she had the happy instinct of planning stories that each girl would like to act out in reality. Not even Miss Alcott apprehends child nature with finer sympathy, or pictures its nobler traits with more skill. Contents: I. How Bunny Brought Good Luck Ii. A Bit Of Wilfulness Iii. The Wolves Of St. Gervas Iv. Three Little Candles V. Uncle And Aunt Vi. The Corn-ball Money Vii. The Prize Girl Of The Harnessing Class Viii. Dolly Phone Ix. A Nursery Tyrant X. What The Pink Flamingo Did Xi. Two Pairs Of Eyes Xii. The Pony That Kept The Store Xiii. Pink And Scarlet Xiv. Dolly’s Lesson Xv. A Blessing In Disguise Xvi. A Granted Wish.

It was Midsummer’s Day, that delightful point toward which the whole year climbs, and from which it slips off like an ebbing wave in the direction of the distant winter. No wonder that superstitious people in old times gave this day to the fairies, for it is the most beautiful day of all. The world seems full of bird-songs, sunshine, and flower-smells then; storm and sorrow appear impossible things; the barest and ugliest spot takes on a brief charm and, for the moment, seems lovely and desirable.

“That’s a picturesque old place,” said a lady on the back seat of the big wagon in which Hiram Swift was taking his summer boarders to drive.

They were passing a low, wide farmhouse, gray from want of paint, with a shabby barn and sheds attached, all overarched by tall elms. The narrow hay-field and the vegetable-patch ended in a rocky hillside, with its steep ledges, overgrown and topped with tall pines and firs, which made a dense green background to the old buildings.

“I don’t know about its being like a picter,” said Hiram, dryly, as he flicked away a fly from the shoulder of his horse, “but it isn’t much by way of a farm. That bit of hay-field is about all the land there is that’s worth anything; the rest is all rock. I guess the Widow Gale doesn’t take much comfort in its bein’ picturesque. She’d be glad enough to have the land made flat, if she could.”

“Oh, is that the Gale farm, where the silver-mine is said to be?”

“Yes, marm; at least, it’s the farm where the man lived that, ‘cordin’ to what folks say, said he’d found a silver-mine. I don’t take a great deal of stock in the story myself.”

“A silver-mine! That sounds interesting,” said a pretty girl on the front seat, who had been driving the horses half the way, aided and abetted by Hiram, with whom she was a prime favorite. “Tell me about it, Mr. Swift. Is it a story, and when did it all happen?”

“Well, I don’t know as it ever did happen,” responded the farmer, cautiously. “All I know for certain is, that my father used to tell a story that, before I was born (nigh on to sixty years ago, that must have been), Squire Asy Allen–that used to live up to that red house on North Street, where you bought the crockery mug, you know, Miss Rose–come up one day in a great hurry to catch the stage, with a lump of rock tied in his handkerchief. Old Roger Gale had found it, he said, and they thought it was silver ore; and the Squire was a-takin’ it down to New Haven to get it analyzed. My father, he saw the rock, but he didn’t think much of it from the looks, till the Squire got back ten days afterward and said the New Haven professor pronounced it silver, sure enough, and a rich specimen; and any man who owned a mine of it had his fortune made, he said. Then, of course, the township got excited, and everybody talked silver, and there was a great to-do.”

“And why didn’t they go to work on the mine at once?” asked the pretty girl.

“Well, you see, unfortunately, no one knew where it was, and old Roger Gale had taken that particular day, of all others, to fall off his hay-riggin’ and break his neck, and he hadn’t happened to mention to any one before doing so where he found the rock! He was a close-mouthed old chap, Roger was. For ten years after that, folks that hadn’t anything else to do went about hunting for the silver-mine, but they gradooally got tired, and now it’s nothin’ more than an old story. Does to amuse boarders with in the summer,” concluded Mr. Swift, with a twinkle. “For my part, I don’t believe there ever was a mine.”

“But there was the piece of ore to prove it.”

“Oh, that don’t prove anything, because it got lost. No one knows what became of it. An’ sixty years is long enough for a story to get exaggerated in.”

“I don’t see why there shouldn’t be silver in Beulah township,” remarked the lady on the back seat. “You have all kinds of other minerals here,–soapstone and mica and emery and tourmalines and beryls.”

“Well, ma’am, I don’t see nuther, unless, mebbe, it’s the Lord’s will there shouldn’t be.”

“It would be so interesting if the mine could be found!” said the pretty girl.

“It would be so, especially to the Gale family,–that is, if it was found on their land. The widow’s a smart, capable woman, but it’s as much as she can do, turn and twist how she may, to make both ends meet. And there’s that boy of hers, a likely boy as ever you see, and just hungry for book-l’arnin’, the minister says. The chance of an eddication would be just everything to him, and the widow can’t give him one.”

“It’s really a romance,” said the pretty girl, carelessly, the wants and cravings of others slipping off her young sympathies easily.