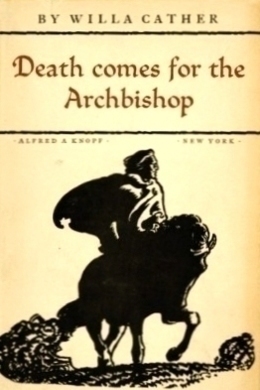 Death Comes for the Archbishop

There is something epic–and almost mythic–about this sparsely beautiful novel by Willa Cather, although the story it tells is that of a single human life, lived simply in the silence of the desert. In 1851 Father Jean Marie Latour comes as the Apostolic Vicar to New Mexico. What he finds is a vast territory of red hills and tortuous arroyos, American by law but Mexican and Indian in custom and belief. In the almost forty years that follow, Latour spreads his faith in the only way he knows–gently, although he must contend with an unforgiving landscape, derelict and sometimes openly rebellious priests, and his own loneliness. One of these events Cather gives us an indelible vision of life unfolding in a place where time itself seems suspended.

One afternoon in the autumn of 1851 a solitary horseman, followed by a pack-mule, was pushing through an arid stretch of country somewhere in central New Mexico. He had lost his way, and was trying to get back to the trail, with only his compass and his sense of direction for guides. The difficulty was that the country in which he found himself was so featureless–or rather, that it was crowded with features, all exactly alike. As far as he could see, on every side, the landscape was heaped up into monotonous red sand-hills, not much larger than haycocks, and very much the shape of haycocks. One could not have believed that in the number of square miles a man is able to sweep with the eye there could be so many uniform red hills. He had been riding among them since early morning, and the look of the country had no more changed than if he had stood still. He must have travelled through thirty miles of these conical red hills, winding his way in the narrow cracks between them, and he had begun to think that he would never see anything else. They were so exactly like one another that he seemed to be wandering in some geometrical nightmare; flattened cones, they were, more the shape of Mexican ovens than haycocks– yes, exactly the shape of Mexican ovens, red as brick-dust, and naked of vegetation except for small juniper trees. And the junipers, too, were the shape of Mexican ovens. Every conical hill was spotted with smaller cones of juniper, a uniform yellowish green, as the hills were a uniform red. The hills thrust out of the ground so thickly that they seemed to be pushing each other, elbowing each other aside, tipping each other over.

The blunted pyramid, repeated so many hundred times upon his retina and crowding down upon him in the heat, had confused the traveller, who was sensitive to the shape of things.

“Mais, c’est fantastique!” he muttered, closing his eyes to rest them from the intrusive omnipresence of the triangle.

When he opened his eyes again, his glance immediately fell upon one juniper which differed in shape from the others. It was not a thick-growing cone, but a naked, twisted trunk, perhaps ten feet high, and at the top it parted into two lateral, flat-lying branches, with a little crest of green in the centre, just above the cleavage. Living vegetation could not present more faithfully the form of the Cross.

The traveller dismounted, drew from his pocket a much worn book, and baring his head, knelt at the foot of the cruciform tree.

Under his buckskin riding-coat he wore a black vest and the cravat and collar of a churchman. A young priest, at his devotions; and a priest in a thousand, one knew at a glance. His bowed head was not that of an ordinary man,–it was built for the seat of a fine intelligence. His brow was open, generous, reflective, his features handsome and somewhat severe. There was a singular elegance about the hands below the fringed cuffs of the buckskin jacket. Everything showed him to be a man of gentle birth–brave, sensitive, courteous. His manners, even when he was alone in the desert, were distinguished. He had a kind of courtesy toward himself, toward his beasts, toward the juniper tree before which he knelt, and the God whom he was addressing.

His devotions lasted perhaps half an hour, and when he rose he looked refreshed. He began talking to his mare in halting Spanish, asking whether she agreed with him that it would be better to push on, weary as she was, in hope of finding the trail. He had no water left in his canteen, and the horses had had none since yesterday morning. They had made a dry camp in these hills last night. The animals were almost at the end of their endurance, but they would not recuperate until they got water, and it seemed best to spend their last strength in searching for it.

On a long caravan trip across Texas this man had had some experience of thirst, as the party with which he travelled was several times put on a meagre water ration for days together. But he had not suffered then as he did now. Since morning he had had a feeling of illness; the taste of fever in his mouth, and alarming seizures of vertigo. As these conical hills pressed closer and closer upon him, he began to wonder whether his long wayfaring from the mountains of Auvergne were possibly to end here. He reminded himself of that cry, wrung from his Saviour on the Cross, “J’ai soif!” Of all our Lord’s physical sufferings, only one, “I thirst,” rose to His lips. Empowered by long training, the young priest blotted himself out of his own consciousness and meditated upon the anguish of his Lord. The Passion of Jesus became for him the only reality; the need of his own body was but a part of that conception.