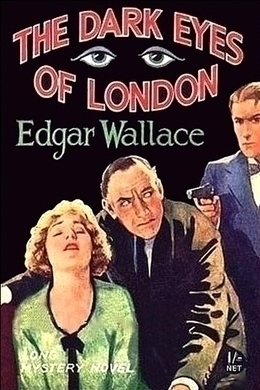 The Dark Eyes of London

Inspector Holt is enjoying the Caf‚ de la Paix and the Boulevard des Italiens. He and his valet Sunny are planning a visit to Monte Carlo when an urgent telegram arrives from the Chief Commissioner of Scotland Yard. Mr Gordon Stuart has been found drowned in suspicious circumstances. Holt returns on the same boat as Flash Fred Grogan, continental crook and gambler. Attempting to solve the mystery leads Holt into a string of exciting adventures - including romance.

Larry Holt sat before the Cafe de la Paix, watching the stream of life flow east and west along the Boulevard des ltaliens. The breath of spring was in the air; the trees were bursting into buds of vivid green; the cloud-flecked skies were blue; and a flood of golden sunshine brought out the colours of the kiosks, and gave an artistic value even to the flaring advertisements. Crowded motor-buses rumbled by, little taxis dashed wildly in and out of the traffic, to the mortal peril of unsuspecting pedestrians.

A gendarme, with cloak over his shoulder, stood in a conventional attitude on the kerb, his hand behind him, staring at nothing, and along the sidewalk there were hurrying bareheaded girls, slow-moving old men, and marching poilus. Itinerant vendors of wares loafed past the tables of the cafe, dusky-faced Arabs with their carpets on their arms, seedy-looking men who hawked bundles of picture post cards and would produce, at the slightest encouragement, cards which were not for the public gaze. All these things and people were a delight to Larry Holt, who had just returned from Berlin after four years’ strenuous work in France and Germany, and felt in that holiday spirit to which even the mind of a detective will ascend.

The position occupied by Larry Holt was something of a mystery to the officials of Scotland Yard. His rank was Inspector, his work was the administrative work of a Commissioner; and it was generally understood that he was in the line for the first vacant assistant commissionership that came along. The question of his rank, of his prospects, did not trouble Larry at that particular moment. He sat there, absorbing the sweetness of spring with every breath he drew. His good-looking face was lit up with the sheer joy of living, and there was in his heart a relief, a sense of rest, which he had not experienced for many a long day.

He revealed himself a fairly tall man when he rose, after paying the waiter, and strolled round the corner to his hotel. It was a slow progress he made, his hands in his pockets, his soft felt hat at the back of his head, a half-smile on his parted lips as he gripped a long black cigarette holder between his white teeth.

He came into the busy vestibule of the hotel, the one spot in Paris where people hustle and rush, where bell-boys really run, and even the phlegmatic Briton seems in a frantic hurry, and he was walking towards the elevator when, through the glass door leading to the palm court, he saw a man in an attitude of elegant repose, leaning back in a big chair and puffing at a cigar.

Larry grinned and hesitated. He knew this lean-faced man, so radiantly attired, his fingers and cravat flashing with diamonds, and in a spirit of mischief he passed through the swing doors and came up to the lounger.

“If it isn’t my dear old friend Fred!” he said softly.

Flash Fred, Continental crook and gambler, leapt to his feet with a look of alarm at the sight of this unexpected visitation.

“Hullo, Mr Holt!” he stammered. “You’re the last person in the world I expected to see–”

“Or wanted to see,” said Larry, shaking his head reproachfully. “What prosperity! Why, Fred, you’re all dressed up like a Christmas tree.”

“Liar you are, and liar you will always be,” said Larry without heat.

“I swear to you on the Book–” began Fred vigorously.

“If,” said Larry without resentment, “you stood between your dead aunt and your failing uncle, and took an oath on Foxe’s Book of Martyrs, I wouldn’t believe you.” He gazed admiringly at Fred’s many adornments, at the big pin in his tie, at the triple chain of gold across his neatly tailored waistcoat, at his white spats and patent shoes, and then brought his eyes back to the perfectly brushed hair.

“You look sweet,” he said. “What is the game? Not,” he added, “that I expect you to tell me, but it must be a pretty prosperous game, Fred.” The man licked his dry lips.

“Whose business are you in now?” asked Larry, interested. “And how did you get in? With a jemmy or a stick of dynamite? That’s a new line for you, Fred. As a rule, you confine yourself strictly to picking crumbs of gold off the unwary youth of the land–and,” he added significantly, “in picking the pockets of the recently deceased.” The man’s face went red.

“You don’t think I had anything to do with that murder in Montpellier?” he protested heatedly.

“I don’t think you shot the unfortunate young man,” admitted Larry, “but you were certainly seen bending over his body and searching his clothes.”

“For identification,” said Fred virtuously. “I wanted to find out who did it.”