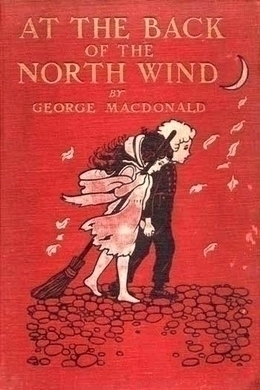 At the Back of the North Wind

The magical story of Diamond, the son of a poor coachman, who is swept away by the North Wind – a radiant, maternal spirit with long, flowing hair – and whose life is transformed by a brief glimpse of the beautiful country – at the back of the north wind. It combines a Dickensian regard for the working class of mid-19th-century England with the invention of an ethereal landscape. More than a century after it was written, George MacDonald’s At the Back of the North Wind continues to intrigue readers with its allegorical treatment of life and death. The great Christian writer C. S. Lewis, working a generation later, called MacDonald “the greatest genius of his kind.” Find out for yourself what so impressed Lewis and countless readers.

I have been asked to tell you about the back of the north wind. An old Greek writer mentions a people who lived there, and were so comfortable that they could not bear it any longer, and drowned themselves. My story is not the same as his. I do not think Herodotus had got the right account of the place. I am going to tell you how it fared with a boy who went there.

He lived in a low room over a coach-house; and that was not by any means at the back of the north wind, as his mother very well knew. For one side of the room was built only of boards, and the boards were so old that you might run a penknife through into the north wind. And then let them settle between them which was the sharper! I know that when you pulled it out again the wind would be after it like a cat after a mouse, and you would know soon enough you were not at the back of the north wind. Still, this room was not very cold, except when the north wind blew stronger than usual: the room I have to do with now was always cold, except in summer, when the sun took the matter into his own hands. Indeed, I am not sure whether I ought to call it a room at all; for it was just a loft where they kept hay and straw and oats for the horses.

And when little Diamond–but stop: I must tell you that his father, who was a coachman, had named him after a favourite horse, and his mother had had no objection:–when little Diamond, then, lay there in bed, he could hear the horses under him munching away in the dark, or moving sleepily in their dreams. For Diamond’s father had built him a bed in the loft with boards all round it, because they had so little room in their own end over the coach-house; and Diamond’s father put old Diamond in the stall under the bed, because he was a quiet horse, and did not go to sleep standing, but lay down like a reasonable creature. But, although he was a surprisingly reasonable creature, yet, when young Diamond woke in the middle of the night, and felt the bed shaking in the blasts of the north wind, he could not help wondering whether, if the wind should blow the house down, and he were to fall through into the manger, old Diamond mightn’t eat him up before he knew him in his night-gown. And although old Diamond was very quiet all night long, yet when he woke he got up like an earthquake, and then young Diamond knew what o’clock it was, or at least what was to be done next, which was–to go to sleep again as fast as he could.

There was hay at his feet and hay at his head, piled up in great trusses to the very roof. Indeed it was sometimes only through a little lane with several turnings, which looked as if it had been sawn out for him, that he could reach his bed at all. For the stock of hay was, of course, always in a state either of slow ebb or of sudden flow. Sometimes the whole space of the loft, with the little panes in the roof for the stars to look in, would lie open before his open eyes as he lay in bed; sometimes a yellow wall of sweet-smelling fibres closed up his view at the distance of half a yard. Sometimes, when his mother had undressed him in her room, and told him to trot to bed by himself, he would creep into the heart of the hay, and lie there thinking how cold it was outside in the wind, and how warm it was inside there in his bed, and how he could go to it when he pleased, only he wouldn’t just yet; he would get a little colder first. And ever as he grew colder, his bed would grow warmer, till at last he would scramble out of the hay, shoot like an arrow into his bed, cover himself up, and snuggle down, thinking what a happy boy he was. He had not the least idea that the wind got in at a chink in the wall, and blew about him all night. For the back of his bed was only of boards an inch thick, and on the other side of them was the north wind.