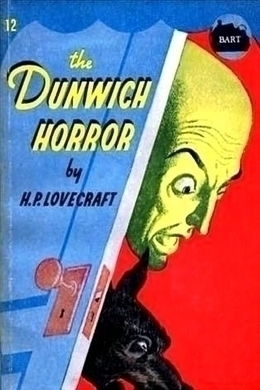 In the degenerate, unpopular backwater of Dunwich, Wilbur Whately, a most unusual child, is born. Of unnatural parentage, he grows at an uncanny pace to an unsettling height, but the boy’s arrival simply precedes that of a true horror — One of the Old Ones, that forces the people of the town to hole up by night, fearing for their lives, only able to trace the wreckage wrought by the gigantic, unseen monster by the bright light of day. In his classic style, H. P. Lovecraft weaves unearthly fantasies of creatures beyond conception — existing between the dimensions that we know.

When a traveler in north central Massachusetts takes the wrong fork at the junction of Aylesbury pike just beyond Dean’s Corners he comes upon a lonely and curious country.

The ground gets higher, and the brier-bordered stone walls press closer and closer against the ruts of the dusty, curving road. The trees of the frequent forest belts seem too large, and the wild weeds, brambles and grasses attain a luxuriance not often found in settled regions. At the same time the planted fields appear singularly few and barren; while the sparsely scattered houses wear a surprisingly uniform aspect of age, squalor, and dilapidation.

Without knowing why, one hesitates to ask directions from the gnarled solitary figures spied now and then on crumbling doorsteps or on the sloping, rock- strewn meadows. Those figures are so silent and furtive that one feels somehow confronted by forbidden things, with which it would be better to have nothing to do. When a rise in the road brings the mountains in view above the deep woods, the feeling of strange uneasiness is increased. The summits are too rounded and symmetrical to give a sense of comfort and naturalness, and sometimes the sky silhouettes with especial clearness the queer circles of tall stone pillars with which most of them are crowned.

Gorges and ravines of problematical depth intersect the way, and the crude wooden bridges always seem of dubious safety. When the road dips again there are stretches of marshland that one instinctively dislikes, and indeed almost fears at evening when unseen whippoorwills chatter and the fireflies come out in abnormal profusion to dance to the raucous, creepily insistent rhythms of stridently piping bull-frogs. The thin, shining line of the Miskatonic’s upper reaches has an oddly serpent-like suggestion as it winds close to the feet of the domed hills among which it rises.

As the hills draw nearer, one heeds their wooded sides more than their stone- crowned tops. Those sides loom up so darkly and precipitously that one wishes they would keep their distance, but there is no road by which to escape them. Across a covered bridge one sees a small village huddled between the stream and the vertical slope of Round Mountain, and wonders at the cluster of rotting gambrel roofs bespeaking an earlier architectural period than that of the neighboring region. It is not reassuring to see, on a closer glance, that most of the houses are deserted and falling to ruin, and that the broken-steepled church now harbors the one slovenly mercantile establishment of the hamlet. One dreads to trust the tenebrous tunnel of the bridge, yet there is no way to avoid it. Once across, it is hard to prevent the impression of a faint, malign odor about the village street, as of the massed mould and decay of centuries. It is always a relief to get clear of the place, and to follow the narrow road around the base of the hills and across the level country beyond till it rejoins the Aylesbury pike. Afterwards one sometimes learns that one has been through Dunwich.

Outsiders visit Dunwich as seldom as possible, and since a certain season of horror all the signboards pointing towards it have been taken down. The scenery, judged by an ordinary aesthetic canon, is more than commonly beautiful; yet there is no influx of artists or summer tourists. Two centuries ago, when talk of witch-blood, Satan-worship, and strange forest presences was not laughed at, it was the custom to give reasons for avoiding the locality. In our sensible age—since the Dunwich horror of 1928 was hushed up by those who had the town’s and the world’s welfare at heart—people shun it without knowing exactly why. Perhaps one reason—though it cannot apply to uninformed strangers—is that the natives are now repellently decadent, having gone far along that path of retrogression so common in many New England backwaters. They have come to form a race by themselves, with the well-defined mental and physical stigmata of degeneracy and inbreeding. The average of their intelligence is woefully low, whilst their annals reek of overt viciousness and of half-hidden murders, incests, and deeds of almost unnameable violence and perversity. The old gentry, representing the two or three armigerous families which came from Salem in 1692, have kept somewhat above the general level of decay; though many branches are sunk into the sordid populace so deeply that only their names remain as a key to the origin they disgrace. Some of the Whateleys and Bishops still send their eldest sons to Harvard and Miskatonic, though those sons seldom return to the mouldering gambrel roofs under which they and their ancestors were born.