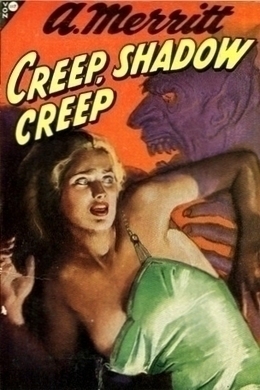 This Two Thousand Year-Old Sorceress Had the Power to Turn People into Shadows! Here is A. Merritt’s masterwork, the best of all his classic fantasies. Creep, Shadow, Creep Is based on legends of Ys and an old Breton song. In this stunning sequel to his classics Burn, Witch, Burn!, the great A. Merritt, an authority on ancient magic and civilizations, captured the feeling of sorcery and the supernatural as never before!

I unpacked my bags at the Explorers’ Club gloomily enough. The singularly unpleasant depression with which I had awakened in my berth the night before had refused to be shaken off. It was like the echo of some nightmare whose details I had forgotten but which still lurked just over the threshold of consciousness.

Joined to it was another irritation.

Of course I had not expected any Mayor’s Committee to welcome me home. But that neither Bennett nor Ralston had met me began to assume the aspect of a major tragedy of neglect. I had written to both before sailing, and I had looked for one of them, at least, to be on the dock to meet me.

They were the closest friends I had, and the queer current of hostility between them had often amused me. They thoroughly liked, yet as thoroughly disapproved of, each other. I had the idea that away down under they were closer each to the other than to me; that they might have been Damon and Pythias if each hadn’t so disliked the other’s attitude toward life; and maybe were Damon and Pythias despite it.

Old Aesop formulated their discordance centuries ago in his fable of the Ant and the Cricket. Bill Bennett was the Ant. The serious- minded, hard-working son of Dr. Lionel Bennett, until recently one of the modern, civilized world’s five outstanding experts upon brain pathology. I make the distinction of modern and civilized because I have had proof that what we are pleased to call the uncivilized world has many more such experts, and I have good reason to believe that the ancient world had others much further advanced than those of the modern world, civilized or uncivilized.

Bennett, the elder, had been one of the few specialists whose mind turned upon his work rather than his bank account. Distinguished but poor. Bennett, the younger, was about thirty-five, my own age. I knew that his father had rested heavily upon him. I suspected that along some lines, and especially in the realm of the subconscious, the son had outstripped the sire; his mind more flexible, more open. Bill had written me a year ago that his father had died, and that he had associated himself with Dr. Austin Lowell, taking the place of Dr. David Braile who had been killed by a falling chandelier in Dr. Lowell’s private hospital. (See Burn, Witch, Burn.)

Dick Ralston was the Cricket. He was heir to a fortune so solid that even the teeth of the depression could only scratch it. Very much the traditional rich man’s son of the better sort, but seeing no honor, use, nor any joy or other virtue in labor. Happy-go-lucky, clever, generous–but decidedly a first-class idler.

I was the compromise–the bridge on which they could meet. I had my medical degree, but also I had enough money to save me from the grind of practice. Enough to allow me to do as I pleased–which was drifting around the world on ethnological research. Especially in those fields which my medical and allied scientific brethren call superstition–native sorceries, witchcraft, voodoo, and the like. In that research I was as earnest as Bill in his. And he knew it.

Dick, on the other hand, attributed my wanderings to an itching foot inherited from one of my old Breton forebears, a pirate who had sailed out of St. Malo and carved himself a gory reputation in the New World. And ultimately was hanged for it. The peculiar bent of my mind he likewise attributed to the fact that two of my ancestors had been burned as witches in Brittany.

I was perfectly understandable to him.

Bill’s industry was not so understandable.

I reflected, morosely, that even if I had been away for three years it was too short a time to be forgotten. And then I managed to shake off my gloom and to laugh at myself. After all, they might not have gotten my letters; or they might have had engagements they couldn’t break; and each might have thought the other would be on hand.

There was an afternoon newspaper on the bed. I noticed that it was of the day before. My eye fell upon some headlines. I stopped laughing. The headlines ran:

“No Reason Known for Act–Fourth New York Man of Wealth to Take His Life Without Apparent Cause in Last Three Months–Police Hint Suicide Club.”

I read the story:

“Richard J. Ralston, Jr., who inherited some $5,000,000 when his father, rich mine owner, died two years ago, was found dead in his bed this morning in a bedroom of his house on 78th Street. He had shot himself through the head, dying instantly. The pistol with which he had killed himself was lying on the floor where it had fallen from his hand. The Detective Bureau identified the finger marks on it as his own.