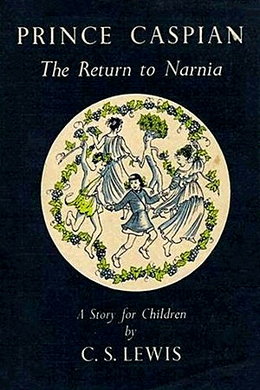 The Return to Narnia

The Pevensie siblings travel back to Narnia to help a prince denied his rightful throne as he gathers an army in a desperate attempt to rid his land of a false king. But in the end, it is a battle of honor between two men alone that will decide the fate of an entire world. Prince Caspian is the fourth book in C. S. Lewis’s classic fantasy series, which has been drawing readers of all ages into a magical land where animals talk and trees walk for over sixty years. This is a stand-alone novel, but if you would like to read more of Lucy and Edmund’s adventures, pick up The Voyage of the Dawn Treader, the fifth book in The Chronicles of Narnia.

Once there were four children whose names were Peter, Susan, Edmund and Lucy, and it has been told in another book called The Lion, the Witch and the Wardrobe how they had a remarkable adventure. They had opened the door of a magic wardrobe and found themselves in a quite different world from ours, and in that different world they had become Kings and Queens in a country called Narnia. While they were in Narnia they seemed to reign for years and years; but when they came back through the door and found themselves in England again, it all seemed to have taken no time at all. At any rate, no one noticed that they had ever been away, and they never told anyone except one very wise grown-up.

That had all happened a year ago, and now all four of them were sitting on a seat at a railway station with trunks and playboxes piled up round them. They were, in fact, on their way back to school. They had travelled together as far as this station, which was a junction; and here, in a few minutes, one train would arrive and take the girls away to one school, and in about half an hour another train would arrive and the boys would go off to another school. The first part of the journey, when they were all together, always seemed to be part of the holidays; but now when they would be saying good-by and going different ways so soon, everyone felt that the holidays were really over and everyone felt their term time feelings beginning again, and they were all rather gloomy and no-one could think of anything to say. Lucy was going to boarding school for the first time.

It was an empty, sleepy, country station and there was hardly anyone on the platform except themselves. Suddenly Lucy gave a sharp little cry, like someone who has been stung by a wasp.

“What’s up, Lu?” said Edmund–and then suddenly broke off and made a noise like “Ow!”

“What on earth—-“ began Peter, and then he too suddenly changed what he had been going to say. Instead, he said, “Susan, let go! What are you doing? Where are you dragging me to?”

“I’m not touching you,” said Susan. “Someone is pulling me. Oh–oh–oh–stop it!”

Everyone noticed that all the others’ faces had gone very white.

“I felt just the same,” said Edmund in a breathless voice. “As if I were being dragged along. A most frightful pulling–ugh! it’s beginning again.”

“Look sharp!” shouted Edmund. “All catch hands and keep together. This is magic–I can tell by the feeling. Quick!”

Next moment the luggage, the seat, the platform, and the station had completely vanished. The four children, holding hands and panting, found themselves standing in a woody place–such a woody place that branches were sticking into them and there was hardly room to move. They all rubbed their eyes and took a deep breath.

“Oh, Peter!” exclaimed Lucy. “Do you think we can possibly have got back to Narnia?”

“It might be anywhere,” said Peter, “I can’t see a yard in all these trees. Let’s try to get into the open–if there is any open.”

With some difficulty, and with some stings from nettles and pricks from thorns, they struggled out of the thicket. Then they had another surprise. Everything became much brighter, and after a few steps they found themselves at the edge of the wood, looking down on a sandy beach. A few yards away a very calm sea was falling on the sand with such tiny ripples that it made hardly any sound. There was no land in sight and no clouds in the sky. The sun was about where it ought to be at ten o’clock in the morning, and the sea was a dazzling blue. They stood sniffing in the sea-smell.

Five minutes later everyone was barefooted and wading in the cool clear water.

“This is better than being in a stuffy train on the way back to Latin and French and Algebra!” said Edmund. And then for quite a long time there was no more talking, only splashing and looking for shrimps and crabs.

“All the same,” said Susan presently, “I suppose we’ll have to make some plans. We shall want something to eat before long.”

“We’ve got the sandwiches Mother gave us for the journey,” said Edmund. “At least I’ve got mine.”

“So were mine,” said Susan.

“Mine are in my coat-pocket, there on the beach,” said Peter. “That’ll be two lunches among four. This isn’t going to be such fun.”

Everyone else now felt thirsty, as one usually is after wading in salt water under a hot sun.

“It’s like being shipwrecked,” remarked Edmund. “In the books they always find springs of clear, fresh water on the island. We’d better go and look for them.”

“Does that mean we have to go back into all that thick wood?” said Susan.