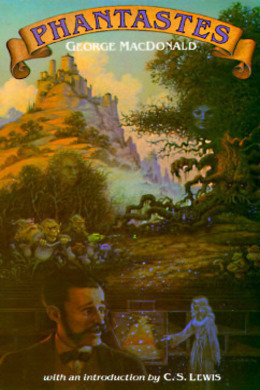 A Faerie Romance for Men and Women

One of the first great works of nineteenth-century fantasy fiction, Phantastes inspired many of the great Christian and fantasy authors of the twentieth century. A fairy tale for adults, it is the captivating story of a wealthy young man who takes an unplanned journey into a fantastic nether world. Led by an enchanting sprite (discovered inside an old desk once owned by his deceased father), he meets a diverse cast of characters, among them a fairy queen, as well as sinister figures who threaten his spiritual well-being. Outstanding for its imaginative characters, vivid action, and subtle yet powerful moral messages, this book, first published 100 years ago, earned MacDonald recognition as “The Grandfather of Modern Fantasy,” and a tribute from W. H. Auden as “one of the most remarkable writers of the 19th century.” Of this work, C. S. Lewis wrote, “It will baptize your imagination.”

I awoke one morning with the usual perplexity of mind which accompanies the return of consciousness. As I lay and looked through the eastern window of my room, a faint streak of peach-colour, dividing a cloud that just rose above the low swell of the horizon, announced the approach of the sun. As my thoughts, which a deep and apparently dreamless sleep had dissolved, began again to assume crystalline forms, the strange events of the foregoing night presented themselves anew to my wondering consciousness. The day before had been my one-and-twentieth birthday. Among other ceremonies investing me with my legal rights, the keys of an old secretary, in which my father had kept his private papers, had been delivered up to me. As soon as I was left alone, I ordered lights in the chamber where the secretary stood, the first lights that had been there for many a year; for, since my father’s death, the room had been left undisturbed. But, as if the darkness had been too long an inmate to be easily expelled, and had dyed with blackness the walls to which, bat-like, it had clung, these tapers served but ill to light up the gloomy hangings, and seemed to throw yet darker shadows into the hollows of the deep-wrought cornice. All the further portions of the room lay shrouded in a mystery whose deepest folds were gathered around the dark oak cabinet which I now approached with a strange mingling of reverence and curiosity. Perhaps, like a geologist, I was about to turn up to the light some of the buried strata of the human world, with its fossil remains charred by passion and petrified by tears. Perhaps I was to learn how my father, whose personal history was unknown to me, had woven his web of story; how he had found the world, and how the world had left him. Perhaps I was to find only the records of lands and moneys, how gotten and how secured; coming down from strange men, and through troublous times, to me, who knew little or nothing of them all. To solve my speculations, and to dispel the awe which was fast gathering around me as if the dead were drawing near, I approached the secretary; and having found the key that fitted the upper portion, I opened it with some difficulty, drew near it a heavy high-backed chair, and sat down before a multitude of little drawers and slides and pigeon-holes. But the door of a little cupboard in the centre especially attracted my interest, as if there lay the secret of this long-hidden world. Its key I found.

One of the rusty hinges cracked and broke as I opened the door: it revealed a number of small pigeon-holes. These, however, being but shallow compared with the depth of those around the little cupboard, the outer ones reaching to the back of the desk, I concluded that there must be some accessible space behind; and found, indeed, that they were formed in a separate framework, which admitted of the whole being pulled out in one piece. Behind, I found a sort of flexible portcullis of small bars of wood laid close together horizontally. After long search, and trying many ways to move it, I discovered at last a scarcely projecting point of steel on one side. I pressed this repeatedly and hard with the point of an old tool that was lying near, till at length it yielded inwards; and the little slide, flying up suddenly, disclosed a chamber–empty, except that in one corner lay a little heap of withered rose-leaves, whose long-lived scent had long since departed; and, in another, a small packet of papers, tied with a bit of ribbon, whose colour had gone with the rose-scent. Almost fearing to touch them, they witnessed so mutely to the law of oblivion, I leaned back in my chair, and regarded them for a moment; when suddenly there stood on the threshold of the little chamber, as though she had just emerged from its depth, a tiny woman-form, as perfect in shape as if she had been a small Greek statuette roused to life and motion. Her dress was of a kind that could never grow old-fashioned, because it was simply natural: a robe plaited in a band around the neck, and confined by a belt about the waist, descended to her feet. It was only afterwards, however, that I took notice of her dress, although my surprise was by no means of so overpowering a degree as such an apparition might naturally be expected to excite. Seeing, however, as I suppose, some astonishment in my countenance, she came forward within a yard of me, and said, in a voice that strangely recalled a sensation of twilight, and reedy river banks, and a low wind, even in this deathly room:–

“Anodos, you never saw such a little creature before, did you?”