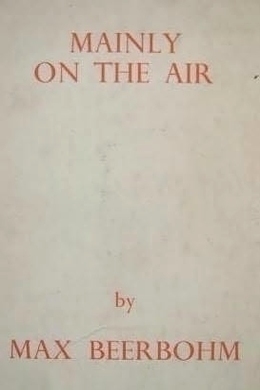 Mainly on the Air

Collected radio talks by the celebrated English essayist and humorist Sir Max Beerbohm. Beerbohm returned to England from his home in Rapallo in Italy in about 1935 when his wife, Florence Kahn was cast in a revival of Peer Gynt on the London stage. At this time he resumed writing essays when the BBC invited him to give regular radio broadcasts. He talked about cars and carriages and music halls, among other topics. He and his wife remained in Britain during World War II during which period Beerbohm continued to broadcast, giving his last ‘on air’ talk in 1945. The success of these broadcasts made Beerbohm a well-known emeritus of British humour. Six of these radio talks were collected together with six other essays and published as Mainly on the Air in 1946.

One of the greatest of Englishmen said that the man who is tired of London is tired of life.

Well, Dr. Johnson had a way of being right. But he had a way of being wrong too–otherwise we shouldn’t love him so much. And I think that a man who is tired of London may merely be tired of life in London. He won’t, certainly, feel any such fatigue if he was born and bred in a distant county, and came to London and beheld London only when he had reached maturity. Almost all the impassioned lovers of London have spent, like Dr. Johnson, their childhood and adolescence in the country. Such was not my own fate. I was born within sound of Bow Bells. I am, in fact, a genuine Cockney (as you will already have guessed from my accent). Before I was able to speak or think my eyes must have been familiar with endless vistas of streets; countless people passing by without a glance at the dear little fellow in the perambulator; any number of cart-horses drawing carts, cab-horses drawing cabs, carriage-horses drawing carriages, through the more or less smoke-laden atmosphere. I was smoke-dried before I could reason and prattle. For me there was never the great apocalyptic moment of initiation into the fabulous metropolis. I never said, ‘So this–is London!’

Years passed: I became a small boy. And I daresay I used to exclaim, ‘So these are Kensington Gardens!’ I liked the grass and the trees. But there were the railings that bounded them, and the pavements and thoroughfares beyond the railings. These had no magic for me. It was the country–the real country–the not imitation country–that I loved.

I became a young man. London was the obvious place for me to earn a living in. In my native city I abode until the year 1910, at which time I was thirty-seven years old. Then I escaped. I had known some parts of the vast affair pretty well. I wish I had appreciated their beauty more vividly while it lasted: a beauty that is gone–or all but gone. I am going to be depressing. Perhaps you had better switch me off.

London is a Cathedral town. And in my day–in the ‘eighties of my boyhood and the ‘nineties of my youth–London, with all her faults, seemed not wholly unlike a Cathedral town, I do assure you. There was a demure poetry about her: one could think of her as ‘her’: nowadays she cannot be called ‘she’: she is essentially ‘it’. Down by the docks, along the Mile End Road, throughout the arid reaches of South Kensington, and so on, I daresay she was ‘it’ already; full of later-nineteenth-century utilitarianism and efficiency, throwing out harsh hints of what the twentieth century had up its horrid sleeve. But in such districts as I liked and, whenever I could, frequented, she kept the eighteenth century about her. Hampstead, upon its hill, was a little old remote village; and so was Chelsea, down yonder by the river. Mayfair and Westminster and St. James’s were grand, of course, very urban, in a proudly unostentatious way. There were Victorian intrusions here and there in their architecture. But the eighteenth century still beautifully reigned over them. They were places of leisure–of leesure, one might almost have said in the old-fashioned way. And, very urban though they were, they were not incongruous with rusticity. St. James’s Park seemed a natural appanage to St. James’s Street; and the two milkmaids who milked two cows there, and sold the milk, did not seem strangely romantic. The Green Park seemed not out of keeping with the houses of Piccadilly. Nor did the Piccadilly goat strike one as more than a little odd in Piccadilly.

I don’t know much about him, though I so often saw him and liked him so much. He lived in a large mews in a side-street, opposite to Gloucester House, the home of the venerable Duke of Cambridge. At about ten o’clock in the morning he would come treading forth with a delicately clumsy gait down the side-street–come very slowly, as though not quite sure there mightn’t be some grass for him to nibble at between the paving-stones. Then he would pause at the corner of Piccadilly and flop down against the railings of the nearest house. He would remain there till luncheon-time and return in the early afternoon. He was a large, handsome creature, with great intelligence in his amber eyes. He never slept. He was always interested in the passing scene. I think nothing escaped him. I wish he could have written his memoirs when he finally retired. He had seen, day by day, much that was worth seeing.