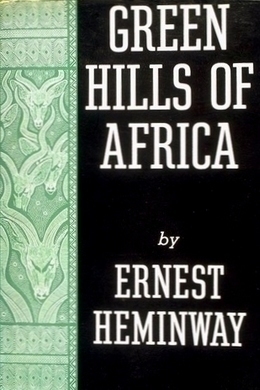 His second major venture into nonfiction (after Death in the Afternoon), Green Hills of Africa is Ernest Hemingway’s lyrical journal of a month on safari in the great game country of East Africa, where he and his wife Pauline journeyed in December of 1933. Hemingway’s well-known interest in - and fascination with - big game hunting is magnificently captured in this evocative account of his trip. In examining the poetic grace of the chase, and the ferocity of the kill, Hemingway also looks inward, seeking to explain the lure of the hunt and the primal undercurrent that comes alive on the plains of Africa. Yet Green Hills of Africa is also an impassioned portrait of the glory of the African landscape, and of the beauty of a wilderness that was, even then, being threatened by the incursions of man.

We were sitting in the blind that Wanderobo hunters had built of twigs and branches at the edge of the salt-lick when we heard the motor-lorry coming. At first it was far away and no one could tell what the noise was. Then it was stopped and we hoped it had been nothing or perhaps only the wind. Then it moved slowly nearer, unmistakable now, louder and louder until, agonizing in a clank of loud irregular explosions, it passed close behind us to go on up the road. The theatrical one of the two trackers stood up.

I put my hand to my mouth and motioned him down.

‘It is finished,’ he said again and spread his arms wide. I had never liked him and I liked him less now.

‘After,’ I whispered. M’Cola shook his head. I looked at his bald black skull and he turned his face a little so that I saw the thin Chinese hairs at the corners of his mouth.

‘Wait a little,’ I told him. He bent his head down again so that it would not show above the dead branches and we sat there in the dust of the hole until it was too dark to see the front sight on my rifle; but nothing more came. The theatrical tracker was impatient and restless. A little before the last of the light was gone he whispered to M’Cola that it was now too dark to shoot.

‘Shut up, you,’ M’Cola told him. ‘The Bwana can shoot after you cannot see.’

The other tracker, the educated one, gave another demonstration of his education by scratching his name, Abdullah, on the black skin of his leg with a sharp twig. I watched without admiration and M’Cola looked at the word without a shadow of expression on his face. After a while the tracker scratched it out.

Finally I made a last sight against what was left of the light and saw it was no use, even with the large aperture.

We stood up and made our way out of the blind and out through the trees, walking on the sandy loam, feeling our way between trees and under branches, back to the road. A mile along the road was the car. As we came alongside, Kamau, the driver, put the lights on.

The lorry had spoiled it. That afternoon we had left the car up the road and approached the salt-lick very carefully. There had been a little rain, the day before, though not enough to flood the lick, which was simply an opening in the trees with a patch of earth worn into deep circles and grooved at the edges with hollows where the animals had licked the dirt for salt, and we had seen long, heart-shaped, fresh tracks of four greater kudu bulls that had been on the salt the night before, as well as many newly pressed tracks of lesser kudu. There was also a rhino who, from the tracks and the kicked-up mound of strawy dung, came there each night. The blind had been built at close arrow-shot of the lick, and sitting, leaning back, knees high, heads low, in a hollow half full of ashes and dust, watching through the dried leaves and thin branches I had seen a lesser kudu bull come out of the brush to the edge of the opening where the salt was and stand there, heavy-necked, grey, and handsome, the horns spiralled against the sun while I sighted on his chest and then refused the shot, wanting not to frighten the greater kudu that should surely come at dusk. But before we ever heard the lorry the bull had heard it and run off into the trees, and everything else that had been moving, in the bush on the flats, or coming down from the small hills through the trees, coming toward the salt, had halted at that exploding, clanking sound. They would come, later, in the dark; but then it would be too late.

So now, going along the sandy track of the road in the car, the lights picking out the eyes of night birds that squatted close on the sand until the bulk of the car was on them and they rose in soft panic; passing the fires of the travellers that all moved to the westward by day along this road, abandoning the famine country that was ahead of us; me sitting, the butt of my rifle on my foot, the barrel in the crook of my left arm, a flask of whisky between my knees, pouring the whisky into a tin cup and passing it over my shoulder in the dark for M’Cola to pour water into it from the canteen, drinking this, the first one of the day, the finest one there is, and looking at the thick bush we passed in the dark, feeling the cool wind of the night and smelling the good smell of Africa, I was altogether happy.

Then ahead we saw a big fire and as we came up and passed, I made out a lorry beside the road. I told Kamau to stop and go back and as we backed into the firelight there was a short, bandy-legged man with a Tyrolese hat, leather shorts, and an open shirt standing before an unhooded engine in a crowd of natives.