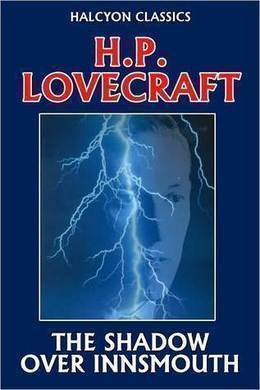 The Shadow Over Innsmouth

Rumours abound of sinister goings-on in the ancient Massachusetts seaport of Innsmouth. The once prosperous town, which has fallen into a state of decrepitude and decay, is a stopover destination for Robert Olmstead, a young historian on a tour of the region. Despite hearing ominous tales of the town and its grotesque inhabitants, Olmstead feels compelled to explore Innsmouth. He finds the place almost deserted, except for a few inhospitable locals with strange, unblinking eyes - the so-called, Innsmouth Look. He meets the town drunk, Zadok Allen, who tells him the terrifying history of the town, about Devil Reef and mutant humanoids, sea gods, gold, and human sacrifice. The deranged ramblings of a madman? As night falls on Innsmouth, Olmstead soon has cause to wonder. The Shadow Over Innsmouth is an integral part of what has become known as H.P. Lovecraft’s Cthulhu Mythos.

During the winter of 1927-28 officials of the Federal government made a strange and secret investigation of certain conditions in the ancient Massachusetts seaport of Innsmouth. The public first learned of it in February, when a vast series of raids and arrests occurred, followed by the deliberate burning and dynamiting—under suitable precautions—of an enormous number of crumbling, worm-eaten, and supposedly empty houses along the abandoned waterfront. Uninquiring souls let this occurrence pass as one of the major clashes in a spasmodic war on liquor.

Keener news-followers, however, wondered at the prodigious number of arrests, the abnormally large force of men used in making them, and the secrecy surrounding the disposal of the prisoners. No trials, or even definite charges were reported; nor were any of the captives seen thereafter in the regular jails of the nation. There were vague statements about disease and concentration camps, and later about dispersal in various naval and military prisons, but nothing positive ever developed. Innsmouth itself was left almost depopulated, and it is even now only beginning to show signs of a sluggishly revived existence.

Complaints from many liberal organizations were met with long confidential discussions, and representatives were taken on trips to certain camps and prisons. As a result, these societies became surprisingly passive and reticent. Newspaper men were harder to manage, but seemed largely to cooperate with the government in the end. Only one paper—a tabloid always discounted because of its wild policy—mentioned the deep diving submarine that discharged torpedoes downward in the marine abyss just beyond Devil Reef. That item, gathered by chance in a haunt of sailors, seemed indeed rather far-fetched; since the low, black reef lay a full mile and a half out from Innsmouth Harbor.

People around the country and in the nearby towns muttered a great deal among themselves, but said very little to the outer world. They had talked about dying and half-deserted Innsmouth for nearly a century, and nothing new could be wilder or more hideous than what they had whispered and hinted at years before. Many things had taught them secretiveness, and there was no need to exert pressure on them. Besides, they really knew little; for wide salt marshes, desolate and unpeopled, kept neighbors off from Innsmouth on the landward side.

But at last I am going to defy the ban on speech about this thing. Results, I am certain, are so thorough that no public harm save a shock of repulsion could ever accrue from a hinting of what was found by those horrified men at Innsmouth. Besides, what was found might possibly have more than one explanation. I do not know just how much of the whole tale has been told even to me, and I have many reasons for not wishing to probe deeper. For my contact with this affair has been closer than that of any other layman, and I have carried away impressions which are yet to drive me to drastic measures.

It was I who fled frantically out of Innsmouth in the early morning hours of July 16, 1927, and whose frightened appeals for government inquiry and action brought on the whole reported episode. I was willing enough to stay mute while the affair was fresh and uncertain; but now that it is an old story, with public interest and curiosity gone, I have an odd craving to whisper about those few frightful hours in that ill-rumored and evilly-shadowed seaport of death and blasphemous abnormality. The mere telling helps me to restore confidence in my own faculties; to reassure myself that I was not the first to succumb to a contagious nightmare hallucination. It helps me, too, in making up my mind regarding a certain terrible step which lies ahead of me.

I never heard of Innsmouth till the day before I saw it for the first and —so far—last time. I was celebrating my coming of age by a tour of New England—sightseeing, antiquarian, and genealogical—and had planned to go directly from ancient Newburyport to Arkham, whence my mother’s family was derived. I had no car, but was traveling by train, trolley and motor-coach, always seeking the cheapest possible route. In Newburyport they told me that the steam train was the thing to take to Arkham; and it was only at the station ticket-office, when I demurred at the high fare, that I learned about Innsmouth. The stout, shrewd-faced agent, whose speech showed him to be no local man, seemed sympathetic toward my efforts at economy, and made a suggestion that none of my other informants had offered.