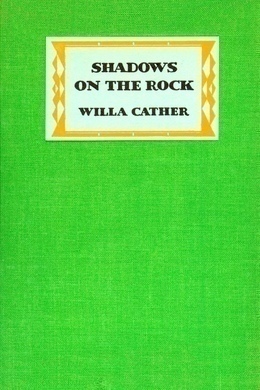 Shadows on the Rock

At the end of the seventeenth century, on that ‘grey rock in the Canadian wilderness’ known as Quebec, a French family, the Auclairs, begin a life very different from the one they knew in Paris. On her mother’s death ten-year-old Cecile is entrusted with the care of the household and of her father, Euclid, the town’s apothecary. Two years later, in 1697, as the red-gold autumn sunlight pours over the rock “like a heavy southern wine”, Cecile and her father prepare for the long, difficult winter ahead with no word from home - news of the world they have left behind must wait until spring, when the annual boats from France are able to make their way up the St Lawrence. For her father, it will be a painful exile, but for the young Cecile life holds innumerable joys as old ties are relinquished and new ones are formed…

One afternoon late in October of the year 1697, Euclide Auclair, the philosopher apothecary of Quebec, stood on the top of Cap Diamant gazing down the broad, empty river far beneath him. Empty, because an hour ago the flash of retreating sails had disappeared behind the green island that splits the St. Lawrence below Quebec, and the last of the summer ships from France had started on her long voyage home.

As long as La Bonne Espérance was still in sight, many of Auclair’s friends and neighbours had kept him company on the hill-top; but when the last tip of white slid behind the curving shore, they went back to their shops and their kitchens to face the stern realities of life. Now for eight months the French colony on this rock in the North would be entirely cut off from Europe, from the world. This was October; not a sail would come up that wide waterway before next July. No supplies; not a cask of wine or a sack of flour, no gunpowder, or leather, or cloth, or iron tools. Not a letter, even–no news of what went on at home. There might be new wars, floods, conflagrations, epidemics, but the colonists would never know of them until next summer. People sometimes said that if King Louis died, the Minister would send word by the English ships that came to New York all winter, and the Dutch traders at Fort Orange would dispatch couriers to Montreal.

The apothecary lingered on the hill-top long after his fellow townsmen had gone back to their affairs; for him this severance from the world grew every year harder to bear. It was a strange thing, indeed, that a man of his mild and thoughtful disposition, city-bred and most conventional in his habits, should be found on a grey rock in the Canadian wilderness. Cap Diamant, where he stood, was merely the highest ledge of that fortified cliff which was “Kebec,”–a triangular headland wedged in by the joining of two rivers, and girdled about by the greater river as by an encircling arm. Directly under his feet was the French stronghold,–scattered spires and slated roofs flashing in the rich, autumnal sunlight; the little capital which was just then the subject of so much discussion in Europe, and the goal of so many fantastic dreams.

Auclair thought this rock-set town like nothing so much as one of those little artificial mountains which were made in the churches at home to present a theatric scene of the Nativity; cardboard mountains, broken up into cliffs and ledges and hollows to accommodate groups of figures on their way to the manger; angels and shepherds and horsemen and camels, set on peaks, sheltered in grottoes, clustered about the base.

Divest your mind of Oriental colour, and you saw here very much such a mountain rock, cunningly built over with churches, convents, fortifications, gardens, following the natural irregularities of the headland on which they stood; some high, some low, some thrust up on a spur, some nestling in a hollow, some sprawling unevenly along a declivity. The Château Saint-Louis, grey stone with steep dormer roofs, on the very edge of the cliff overlooking the river, sat level; but just beside it the convent and church of the Récollet friars ran downhill, as if it were sliding backwards. To landward, in a low, well-sheltered spot, lay the Convent of the Ursulines … lower still stood the massive foundation of the Jesuits, facing the Cathedral. Immediately behind the Cathedral the cliff ran up sheer again, shot out into a jutting spur, and there, high in the blue air, between heaven and earth, rose old Bishop Laval’s Seminary. Beneath it the rock fell away in a succession of terraces like a circular staircase; on one of these was the new Bishop’s new Palace, its gardens on the terrace below.

Not one building on the rock was on the same level with any other,– and two hundred feet below them all was the Lower Town, crowded along the narrow strip of beach between the river’s edge and the perpendicular face of the cliff. The Lower Town was so directly underneath the Upper Town that one could stand on the terrace of the Château Saint-Louis and throw a stone down into the narrow streets below.