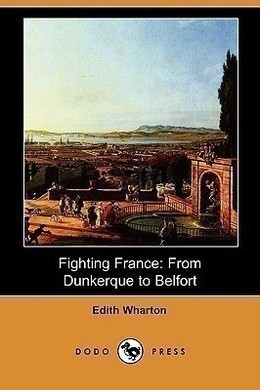 From Dunkerque to Belfort

As nuanced in her observations of human behavior as she is in her vivid depictions of French landscape and architecture, Wharton fully exploited her unique position as consort to Walter Barry, president of the American Chamber of Commerce in Paris, which allowed her unparalleled access to life in the trenches. Sensitive without sentimentality, and offering a valuable and extremely rare female perspective of a war dominated by the male viewpoint, this series of articles is nothing less than an inspirational testament to the strength of the human spirit at a time of the greatest adversity.

On the 30th of July, 1914, motoring north from Poitiers, we had lunched somewhere by the roadside under apple-trees on the edge of a field. Other fields stretched away on our right and left to a border of woodland and a village steeple. All around was noonday quiet, and the sober disciplined landscape which the traveller’s memory is apt to evoke as distinctively French. Sometimes, even to accustomed eyes, these ruled-off fields and compact grey villages seem merely flat and tame; at other moments the sensitive imagination sees in every thrifty sod and even furrow the ceaseless vigilant attachment of generations faithful to the soil. The particular bit of landscape before us spoke in all its lines of that attachment. The air seemed full of the long murmur of human effort, the rhythm of oft-repeated tasks, the serenity of the scene smiled away the war rumours which had hung on us since morning.

All day the sky had been banked with thunder-clouds, but by the time we reached Chartres, toward four o’clock, they had rolled away under the horizon, and the town was so saturated with sunlight that to pass into the cathedral was like entering the dense obscurity of a church in Spain. At first all detail was imperceptible; we were in a hollow night. Then, as the shadows gradually thinned and gathered themselves up into pier and vault and ribbing, there burst out of them great sheets and showers of colour. Framed by such depths of darkness, and steeped in a blaze of mid-summer sun, the familiar windows seemed singularly remote and yet overpoweringly vivid. Now they widened into dark-shored pools splashed with sunset, now glittered and menaced like the shields of fighting angels. Some were cataracts of sapphires, others roses dropped from a saint’s tunic, others great carven platters strewn with heavenly regalia, others the sails of galleons bound for the Purple Islands; and in the western wall the scattered fires of the rose-window hung like a constellation in an African night. When one dropped one’s eyes form these ethereal harmonies, the dark masses of masonry below them, all veiled and muffled in a mist pricked by a few altar lights, seemed to symbolize the life on earth, with its shadows, its heavy distances and its little islands of illusion. All that a great cathedral can be, all the meanings it can express, all the tranquilizing power it can breathe upon the soul, all the richness of detail it can fuse into a large utterance of strength and beauty, the cathedral of Chartres gave us in that perfect hour.

It was sunset when we reached the gates of Paris. Under the heights of St. Cloud and Suresnes the reaches of the Seine trembled with the blue-pink lustre of an early Monet. The Bois lay about us in the stillness of a holiday evening, and the lawns of Bagatelle were as fresh as June. Below the Arc de Triomphe, the Champs Elysees sloped downward in a sun-powdered haze to the mist of fountains and the ethereal obelisk; and the currents of summer life ebbed and flowed with a normal beat under the trees of the radiating avenues. The great city, so made for peace and art and all humanest graces, seemed to lie by her river-side like a princess guarded by the watchful giant of the Eiffel Tower.

The next day the air was thundery with rumours. Nobody believed them, everybody repeated them. War? Of course there couldn’t be war! The Cabinets, like naughty children, were again dangling their feet over the edge; but the whole incalculable weight of things-as-they-were, of the daily necessary business of living, continued calmly and convincingly to assert itself against the bandying of diplomatic words. Paris went on steadily about her mid-summer business of feeding, dressing, and amusing the great army of tourists who were the only invaders she had seen for nearly half a century.

All the while, every one knew that other work was going on also. The whole fabric of the country’s seemingly undisturbed routine was threaded with noiseless invisible currents of preparation, the sense of them was in the calm air as the sense of changing weather is in the balminess of a perfect afternoon. Paris counted the minutes till the evening papers came.

They said little or nothing except what every one was already declaring all over the country. “We don’t want war–mais it faut que cela finisse!” “This kind of thing has got to stop”: that was the only phase one heard. If diplomacy could still arrest the war, so much the better: no one in France wanted it. All who spent the first days of August in Paris will testify to the agreement of feeling on that point. But if war had to come, the country, and every heart in it, was ready.