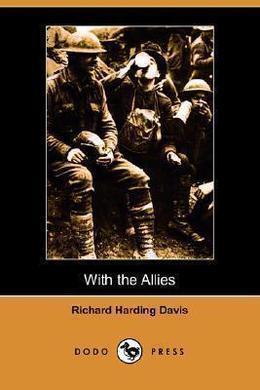 In With the Allies, Davis says that this was not a war against the Germans, but a war against the military aristocracy of Germany. Harding speaks of the lack of knowledge in the United States about the war. He blames censorship and the lack of understanding of the massive scale of the war. Harding believes that America had to take part in the action, because the flight in Europe was not a fair fight. The Table of Contents includes The Germans In Brussels, To Be Treated As A Spy, The Burning Of Louvain, Paris In War Time, The Battle Of Soissons, The Bombardment Of Rheims, The Spirit Of The English, Our Diplomats In The War Zone, Under Fire, The Waste Of War, and The War Correspondents.

When, on August 4, the Lusitania, with lights doused and air-ports sealed, slipped out of New York harbor the crime of the century was only a few days old. And for three days those on board the Lusitania of the march of the great events were ignorant. Whether or no between England and Germany the struggle for the supremacy of the sea had begun we could not learn.

But when, on the third day, we came on deck the news was written against the sky. Swinging from the funnels, sailors were painting out the scarlet-and-black colors of the Cunard line and substituting a mouse-like gray. Overnight we had passed into the hands of the admiralty, and the Lusitania had emerged a cruiser. That to possible German war-ships she might not disclose her position, she sent no wireless messages. But she could receive them; and at breakfast in the ship’s newspaper appeared those she had overnight snatched from the air. Among them, without a scare-head, in the most modest of type, we read: “England and Germany have declared war.” Seldom has news so momentous been conveyed so simply or, by the Englishmen on board, more calmly accepted. For any exhibition they gave of excitement or concern, the news the radio brought them might have been the result of a by-election.

Later in the morning they gave us another exhibition of that repression of feeling, of that disdain of hysteria, that is a national characteristic, and is what Mr. Kipling meant when he wrote: “But oh, beware my country, when my country grows polite!”

Word came that in the North Sea the English war-ships had destroyed the German fleet. To celebrate this battle which, were the news authentic, would rank with Trafalgar and might mean the end of the war, one of the ship’s officers exploded a detonating bomb. Nothing else exploded. Whatever feelings of satisfaction our English cousins experienced they concealed.

Under like circumstances, on an American ship, we would have tied down the siren, sung the doxology, and broken everything on the bar. As it was, the Americans instinctively flocked to the smoking-room and drank to the British navy. While this ceremony was going forward, from the promenade-deck we heard tumultuous shouts and cheers. We believed that, relieved of our presence, our English friends had given way to rejoicings. But when we went on deck we found them deeply engaged in cricket. The cheers we had heard were over the retirement of a batsman who had just been given out, leg before wicket.

When we reached London we found no idle boasting, no vainglorious jingoism. The war that Germany had forced upon them the English accepted with a grim determination to see it through and, while they were about it, to make it final. They were going ahead with no false illusions. Fully did every one appreciate the enormous task, the personal loss that lay before him. But each, in his or her way, went into the fight determined to do his duty. There was no dismay, no hysteria, no “mafficking.”

The secrecy maintained by the press and the people regarding anything concerning the war, the knowledge of which might embarrass the War Office, was one of the most admirable and remarkable conspiracies of silence that modern times have known. Officers of the same regiment even with each other would not discuss the orders they had received. In no single newspaper, with no matter how lurid a past record for sensationalism, was there a line to suggest that a British army had landed in France and that Great Britain was at war. Sooner than embarrass those who were conducting the fight, the individual English man and woman in silence suffered the most cruel anxiety of mind. Of that, on my return to London from Brussels, I was given an illustration. I had written to The Daily Chronicle telling where in Belgium I had seen a wrecked British airship, and beside it the grave of the aviator. I gave the information in order that the family of the dead officer might find the grave and bring the body home. The morning the letter was published an elderly gentleman, a retired officer of the navy, called at my rooms. His son, he said, was an aviator, and for a month of him no word had come. His mother was distressed. Could I describe the air-ship I had seen?

I was not keen to play the messenger of ill tidings, so I tried to gain time.

“What make of aeroplane does your son drive?” I asked.

As though preparing for a blow, the old gentleman drew himself up, and looked me steadily in the eyes.

“A Blériot monoplane,” he said.

I was as relieved as though his boy were one of my own kinsmen.

Of the two I appeared much the more pleased.

“But why didn’t you go to the War Office?” I asked.

He reproved me firmly.