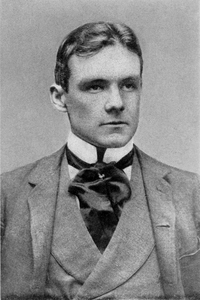 Richard Harding Davis was a popular writer of fiction and drama, and a journalist famous for his coverage of the Spanish-American War, the Second Boer War, and the First World War. Davis made his reputation as a newspaper reporter in May to June 1889, by reporting on the devastation of Johnstown, Pennsylvania, following the infamous flood and added to his reputation by reporting on events such as the first electrocution of a criminal.

Davis became a managing editor of Harper’s Weekly, and was one of the world’s leading war correspondents at the time of the Second Boer War in South Africa. As an American, he had the unique opportunity to see the war first-hand from both the British and Boer perspectives. Davis also worked as a reporter for the New York Herald, The Times, and Scribner’s Magazine.

He was popular among the leading writers of his time and despite his alleged association with Yellow journalism, his writings of life and travel in Central America, the Caribbean, Rhodesia, South Africa during the Second Boer War were widely published. (source: Wikipedia)

Author and journalist Richard Harding Davis, one of the most popular newspaper writers and novelists at the turn of the 20th century, may well be the so...read more »

Gallegher And Other Stories Summary: The pity of the whole situation was, that the boy was only a boy with all his man’s miserable knowledge of the worl...read more »

Ranson’s Folly is about the audacious, dare-devil exploits of a junior officer in the U.S. Army, whose position and influence secure a lieutenancy in a ...read more »

A romance of America’s nascent imperial power recounting the adventures of Robert Clay, a mining engineer and sometime mercenary, and Hope Langham, the ...read more »

Even after they unmasked Talbot I had neither the heart nor the inclination to turn him down. Indeed, had not some of the passengers testified that I be...read more »

A collection of early short stories that, along with the title story, include The Vagrant, On the Fever Ship, The Man With One Talent, and The Last Ride...read more »