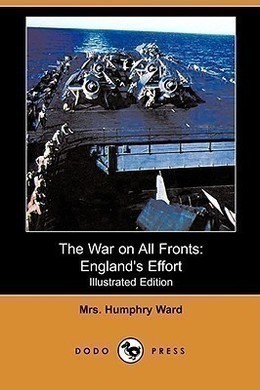 The War on All Fronts: Letters to an American Friend

That is the question which Mrs. Ward, replying to some doubts and queries of an American friend, has undertaken to answer in this series of letters, and every one who reads them will admit that her answer is as complete and triumphant as it is thrilling. Nobody but a woman, an Englishwoman of warm heart, strong brain, and vivid power of observation, could possibly have written these letters which reflect the very soul of England since this wicked and cruel war began. She has unfolded and interpreted to us, as no one else, I think, has even attempted to do, the development and absolute transformation of English men and women, which, has enabled them, living and dying, to secure for their proud nation under God that “new birth of freedom” which Lincoln at Gettysburg prophesied for his own countrymen. Really the cause is the same, to secure the selfsame thing, “that government of the people, by the people, and for the people may not perish from the earth”; and if any American wishes to know how this has been accomplished, he must read these letters, which were written expressly for our enlightenment.

Your letter has found me in the midst of work quite unconnected with this hideous war in which for the last eighteen months we in England have lived and moved and had our being. My literary profession, indeed, has been to me, as to others, since August 4th, 1914, something to be interposed for a short time, day by day, between a mind tormented and obsessed by the spectacle of war and the terrible reality it could not otherwise forget. To take up one’s pen and lose oneself for a while in memories of life as it was long, long before the war–there was refreshment and renewal in that! Once–last spring–I tried to base a novel on a striking war incident which had come my way. Impossible! The zest and pleasure which for any story-teller goes with the first shaping of a story died away at the very beginning. For the day’s respite had gone. The little “wind-warm” space had disappeared. Life and thought were all given up, without mercy or relief, to the fever and nightmare of the war. I fell back upon my early recollections of Oxford thirty, forty years ago–and it was like rain in the desert. So that, in the course of months it had become a habit with me never to write about the war; and outside the hours of writing to think and talk of nothing else.

But your letter suddenly roused in me a desire to write about the war. It was partly I think because what you wrote summed up and drove home other criticisms and appeals of the same kind. I had been putting them mechanically aside as not having any special reference to me; but in reality they had haunted me. And now you make a personal appeal. You say that England at the present moment is misunderstood, and even hardly judged in America, and that even those great newspapers of yours that are most friendly to the Allies are often melancholy reading for those with English sympathies. Our mistakes–real and supposed–loom so large. We are thought to be not taking the war seriously–even now. Drunkenness, strikes, difficulties in recruiting the new armies, the losses of the Dardanelles expedition, the failure to save Serbia and Montenegro, tales of luxurious expenditure in the private life of rich and poor, and of waste or incompetence in military administration–these are made much of, even by our friends, who grieve, while our enemies mock. You say the French case has been on the whole much better presented in America than the English case; and you compare the international situation with those months in 1863 when it was necessary for the Lincoln Government to make strenuous efforts to influence and affect English opinion, which in the case of our upper classes and too many of our leading men was unfavourable or sceptical towards the North. You who know something of the vastness of the English effort–you urge upon me that English writers whose work and names are familiar to the American public are bound to speak for their country, bound to try and make Americans feel what we here feel through every nerve–that cumulative force of a great nation, which has been slow to rouse, and is now immovably–irrevocably–set upon its purpose. “Tell me,” you say in effect, “what in your belief is the real spirit of your people–of your men in the field and at sea, of your workmen and employers at home, your women, your factory workers, your soldiers’ wives, your women of the richer and educated classes, your landowners and politicians. Are you yet fully awake–yet fully in earnest, in this crisis of England’s fate? ‘Weary Titan’ that she is, with her age-long history behind her, and her vast responsibilities by sea and land, is she shouldering her load in this incredible war, as she must shoulder it; as her friends–the friends of liberty throughout the world–pray that she may shoulder it?”